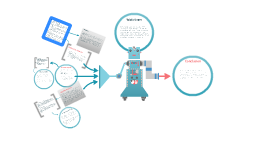 Transcript: Marketing Robotic surgery is a dynamic developing technology. With its inception and continued use, we see economic issues, gender issues, and self image issues arise. These issues are highly complex, and many will not be answered for some time. Elson, 2000; Ancheta, 2000 Economic Aspects Most robotic surgery today is minimally invasive. It leaves very little markings on the body, and postoperative hospital time is often unnecessary. However, there are some forms of surgery that have lasting effects on the bodies and psyches of patients, regardless of visible scars. Currently, the da Vinci system can perform hysterectomies and myomectomies. Since robotic surgery technology advances so quickly, it would be safe to assume that robots may be performing cosmetic surgeries in the near future. However, some believe that the battle between the truth about robotic surgery and the novelty of it is lost because the marketing of the procedures is too strong. Conrad defines medicalization as "defining a problem in medical terms, usually as an illness or disorder, or using a medical intervention to treat it." I posit that a process such as surgery, which is a form of medicalization in and of itself, can be medicalized. Conrad talks at length about how biotechnology companies are "major players" of medicalization. Looking at the history of robotic surgery, one can see how the medicalization of surgery itself occurred. It all started with a need for more precision and better technique (the disease), and it was pushed along to what it is today by Army funding. Without this funding, we likely would not have the da Vinci or Zeus systems (the medical intervention that treats the problems of nonrobotic laparoscopic surgery). In the examples above, one can clearly see how the change in the body as a result of surgery has an impact on the mind of a person, or how the state of mind of a person will drive them away or towards having a surgical procedure. The interaction between body and mind in these cases cannot be denied. When robots perform these surgeries, they become the agents that create the link, rather than an actual surgeon. Questions to which there are no clear answers arise like "Should I trust this machine to give me a proper face lift?" or "Am I comfortable with a machine conducting a surgery on something that I use to gender identify?" Lanfranco et al, 2004 Continuing Development PROBOT- prostate surgery ROBDOC- hip replacement femur machining US Army funds research for battlefield application Companies and robotics develop out of Army funding AESOP- Automated Endoscopic System for Optimal Positioning - auditory commands to position camera Integrative Surgical- da Vinci Surgical System Computer Motion- Zeus system Robotic surgery is a relatively new and rapidly growing technology. Like most new technologies, there are still many factors about robotic surgery that are unknown. This presentation will show how history, economy, and organics interact to create complexity in a technology that is superficially simple. Robotic surgery is an expensive procedure, but it is "unclear whether the outcomes are better, worse, or the same." $1.39 million for the machine $140,000 per year for service contract $1,500 to $2,000 in disposable materials per patient, patient cost much higher Robotic surgery has an extremely steep learning curve, requiring a massive time investment "Robotic surgery has to be better to justify its learning curve, to justify its unknown cancer control, to justify its increased cost" Both doctors and patients fallaciously believe that newer is better, but there are some healthcare professionals trying to move away from that message. Gender Identity and Gynecological Surgery Conrad, 2005 (Kolata, 2010) Commodity-fetishism Robotic Surgery Because of its high costs, hospitals often market robotic surgery using questionable claims. Doctors and medical centers favor robotic surgery. Medicalization Lanfranco et al, 2004 Organic Aspects Beginning Robotic surgery has roots in minimally invasive laparoscopic surgery Laparosopic surgery has limitations Loss of haptic feedback, moving instruments while watching 2D video, restricted degrees of motion, and others. Robotic surgery developed to overcome these limitatoins Puma 560- robot developed in 1985 to increase precision in neurosurgical biopsies Current Systems da Vinci- movable cart with 2 instrument arms and a camera arm. 3D image is rendered over physican's arms giving the impression of being at the surgical site Zeus- table mounted 3 armed system that displays complete visualization of OR on a monitor (Kolata, 2010) Historical Aspects "Women's decisions to have cosmetic surgeries are socially situated and experienced." (Ancheta, 2000) Rebecca Ancheta delineates three key themes that come into play when women decide to have cosmetic surgery. The first is a response to the "mask of aging." The second is the importance of social networks. The third are beliefs 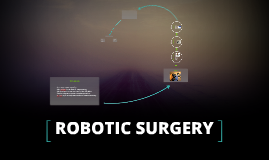 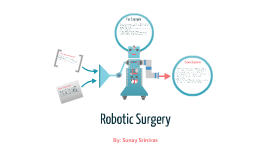 Transcript: This means that the surgery will be much less invasive than standard surgery and instruments will be inserted through small cuts and will be able access hard to reach areas in the body. By: Sunay Srinivas Here in America, at University Hospital, a man named Bobby Dunn, age 75 found out that he needed heart surgery. He received minimally invasive mitral valve repair/replacement. To see inside, the surgeon used 3D transesophageal imaging which according to him allowed him to have a "fantastic" view. The surgeon noted that the recovery rate for people who have robotic surgery is a lot faster than those who have traditional surgery. "People go home in 3 days compared to the normal 9 days. To get this type of heart surgery, the patient is evaluated by three experts: The surgeon, the cardiologist and the vascular surgeon. How it will be Done Comments on the Surgery The way this will work is by having the surgeons attach surgical instruments to the robot and perform the surgery via a a computer control. The robotic arm is easier for surgeries such as an endoscopy. For Example Robotic Surgery What This Means Prof. Dr Asif Zafar recently announced at a two-day annual International Surgical Conference (SURGICON 2012) that robotic surgery will be available in state hospitals in Pakistan "soon" for public hospitals to perform advanced operations. The Announcement Robotic surgery is a type of surgery that is getting larger in practice and shows great results for the patient. Articles show that more of the world is beginning to use higher grade technology. Who knows? Maybe the next surgery you get will be done by R2D2. Conclusion 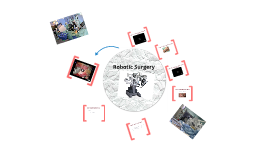 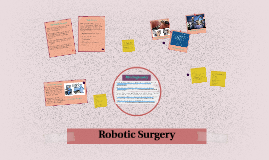 Transcript: The Surgical Robots must be approved the the FDA in order to be used in real surgeries. It is made up of four arms, one that has a camera that goes into the body and the other three that help assist in the surgery. The surgeon sits in a console with a camera screen to see what he is doing. While a team of assistants work around the patient. Robotic Surgery There are a couple that have been developing and improving Surgical Robots and Systems. Here is a list of a few: Titan Medical Inc. MAKO Surgical Corp. Mazor Robotics ZEUS Robotic Surgical Systems OmniGuide Surgical daVinci Surgical System Intuitive Surgical Inc. Math is needed for developing surgical robots because accuracy of the sensors and motions of the robot for precision is needed. Also, for the 3-D imaging and pictures of the internal things in the body during the procedure. Algebraic and Differential Topology Optimization Algorithms Combinatorics Differential Algebraic Inequalities Statistics How it works. Historical Background Used for surgeries that are much more complex. Head and Neck Surgery Urology Pediatric Surgeries Cardiology and Electrophysiology Gynecology Neurosurgery Gastrointestinal Surgery Cardiothoratic Surgery Surgical Robot assisting surgery. What a Surgical Robot looks like. How the arms are controlled. What is Robotic Surgery? Bibliography What is it used for? Math Involved Reduce infections. Reduce blood loss. Less time spent in hospital and for recovery. Decrease pain and scarring. Greater visualization compared to traditional surgery. The camera that goes in to the body enhances and enlarges the images. Greater accuracy and precision. Benefits Companies The first documented robot used in surgery was in 1985, with the PUMA 560. It was used for a brain biopsy. Following this, in 1988, surgeons also used the PROBOT that was developed by the Imperial College London, for prostate surgery. In 1992, the ROBODOC was developed, first in history, to assist in joint replacement surgeries. After these, many more surgical systems were developed, including the ZEUS and daVinci systems in 1994 and 2000. Robotic Surgery is minimally invasive surgery. This means that it uses small incisions to perform surgeries. Robotics surgery allows for a greater amount of precision. The robot is computer controlled and surgeons use it for better control and flexibility in more complex surgeries. Rough blueprint of the robot. "Surgical Instruments and Robots." <i>Medical Devices -</i>. N.p., n.d. Web. 4 June 2014. &lt;http://www.mathworks.com/medical-devices/surgical-robotic-instruments.html&gt;. "The Interplay between Mathematics and Robotics." <i></i>. National Science Foundation, 1 May 2000. Web. 4 June 2014. &lt;http://www.math.umbc.edu/~potra/FINALreport.PDF&gt;. "Benefits of Robotic Surgery." <i>UC Health</i>. N.p., n.d. Web. 4 June 2014. &lt;http://uchealth.com/services/robotic-surgery/patient-information/benefits/&gt;. "Robotic Surgery." <i>What is ?</i>. Mount Carmel Health System, 1 Jan. 2014. Web. 4 June 2014. &lt;http://www.mountcarmelhealth.com/robotic-surgery-321&gt;. "ROBODOC® :: Patients :: About." <i>ROBODOC® :: Patients :: About</i>. N.p., n.d. Web. 4 June 2014. &lt;http://www.robodoc.com/patient_about_history.html&gt;. 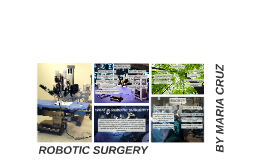 Transcript: THANK YOU POSITIVE IMPACTS NEGATIVE IMPACTS POSITIVE IMPACTS POSITIVE IMPACTS ENVIRONMENT The government doesn't have to pay a lot for the patients recovery in the hospital Future surgeons might not be as skilled Parts of the robot can't be recycled Robotic surgery is a method of a medical operation where robots are used to perform a procedure with the guidance of a surgeon who controls it with a computer. The surgeon could be in a different room, while multiple nurses surround the patient just in case something goes wrong. It takes a longer time to perform the surgery Companies who make the robot earns a lot of money NEGATIVE IMPACTS INDIVIDUALS NEGATIVE IMPACTS Doesn't need harsh chemicals to clean the robot and won't pollute the waste water system ROBOTIC SURGERY Surgeons may lose their jobs Surgeons will use less animals to practice on Patients have a faster recovery and less risk of infection SOCIETY Robotic surgery produces CO2 emissions The machine can glitch It has a big role in global warming Increases thee surgeons control, range, and precision The surgeon doesn't need to be in the room WHAT IS ROBOTIC SURGERY? Many hospitals can't afford this technology BY MARIA CRUZ Patients have had tears, burns, and accidental punctures Helps the surgeon perform on smaller cuts 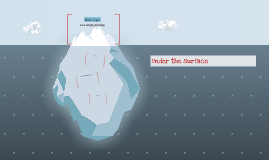 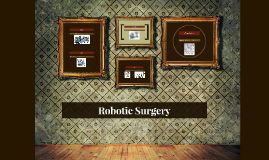