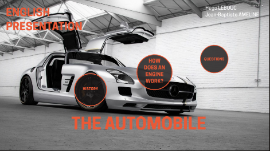 Transcript: ENGLISH PRESENTATION THE AUTOMOBILE Hugo LEBOUC Jean-Baptiste AMELINE THE HISTORY HISTORY The automobile was born from a human dream to create a way to move more efficient than horses. Since 1769, it became the main way of transportation to a point of being omnipresent in the human society and history. Today, the automobile is still one the most used vehicle, and it has evolved so much that it became an art. 1769 The first car ever created was a steam-powered engine vehicule made by Nicolas-Joseph Cugnot in 1769. 1885 The first car to go into production with an internal combustion engine was the 1885 Benz Patent-Motorwagen. HOW DOES AN ENGINE WORK? HOW AN ENGINE WORKS. These days, the engineering of engine is a well known exercise and we're not creating new things, we only improve the existant patterns. There is two main kinds of Thermal engines : two-strokes and four-strokes. But there is also Hybrid and Full-electric engines. These are the most used engines because of their reliability and their diversity. Thermal engines. Thermal There is a lot of different thermal engines, and they all have a specific use. We will show you the most used ones. This is kind of an extinct race, since the two-strokes engines requires lots of oil and gaz. They used to be very famous among the bikers since this kind of engine is very powerful, they tend to work better at higher RPMs and the bikes being lightweight it was a great combo Two-strokes engines. Two-strokes This is the most common engine race, basically all engines are 4Strokes these days because of the lower fuel consumption and CO2 rejections compared to a 2Strokes engine. Four-strokes engines. Four-strokes Here's an overview of the most famous engine types. Different kinds of engines. Inline Basically the most common engine that you can find in any standard car. It's fuel efficient, compact and cheap to build. Inline engine V8 Boxer Rotary Hybrid Full-electric QUESTIONS QUESTIONS ? 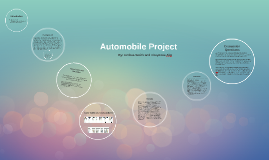 Transcript: Work Cited 2 Independent Variable: Height of Ramp Dependent Variable: Force of Impact Constant Factors: Weight, Cart Weight,and Distance Released Q8: What are two improvements that could be made with the set up or procedure of this activity if you were to do this again? If we were to do this again, two improvements we would make would be an easier and more accurate way to set up and test the height and also have the motion sensor work more accurately. 1. Open the program logger lite 2. Measure 1 meter on the ramp and mark the spot 3. Create a ramp with a height of 30cm with one end against the wall 4. Measure the mass of your cart with the triple-beam balance 5. Record value of mass disc 6. Place motion sensor at the top of the ramp 7. Hold the front wheels of the cart behind the 1 meter mark 8. Press the collect button and let go of the cart and record the distance and time 9. Repeat this process for the heights of 20cm, 40cm, and 50cm 10. Figure out the calculations By: Andrea Smith and Cheyenne Alm Introduction Problem Statement: How does the height of the ramp effect the force of impact? Data Table and Calculations 2 Discussion Questions Conclusion In our experiment we tested how the height affected the force of impact. We used a ramp with a stand to hold it at different heights, as well as a cart to simulate a car. We used a motion sensor to be able to detect movement of the cart. We set up the ramp at our predetermined height and added 200g weight to our cart. We started the car a meter away from the wall and made sure the motion sensor was collecting the movement. From these tests, we were able to determine the mass, distance, and time. We were then able to calculate the velocity, acceleration, force, and momentum. We then conducted that the more intense the angle of elevation the greater of force. If the height of the ramp is only 0.2m then the force is 0.25N but if the height is 0.5m then the force is 1.15N. The force for the 0.4m was 0.91N and the force of the ramp when it was 0.3m was 0.27. The larger height resulted in a more intense force. In our experiment we found reasonable data that make sense. Our hypothesis, if the height is changed then the force of impact will either increase or decrease, was proven correct due to our results varying to what height the ramp is located at. I do think our hypothesis is correct due to more than just the data. It’s logical that sense that a steeper angle will cause the speed to increase which results in more force at the impact. Our problem question was: how does the height effect the force of impact? We found out that the greater the height of the ramp (0.4m or 0.5m) the more intense the force is (0.91N or 1.15N) so we can see that height does effect the speed and time of the cart which results in a change in force. Q6: Did the momentum of the cart change very much between trials? Why or why not? Yes, the momentum did change between trials due to the changing of the independent variable and the factors that go along with that. Q7: What would have happened to the momentum if the velocity of your cart was higher? The momentum would increase because velocity is part of how you calculate momentum so the higher the number the higher the momentum. Materials -Cart -Ramp -Meter Stick -Triple-beam Balance -Ring Clamp -Ring Stand -Motion Sensor -Computer -200g disc Results Procedure In our research we learned when automobiles were first produced, and other safety features. The first mass production of automobiles was in 1908 by Henry Ford. The first safety feature we researched were seat belts which were first put in cars in the early 1950's. The second safety feature we researched was air bags which were first produced it the 1980's. The third and final safety feature we researched was disc brakes which were put in cars in the mid 1970's. One safety feature that we thought cars should have in the future was windows that slightly tint when the sun shines bright on them, so that the sun does not distract or make it so the driver can't see. Automobile Project Background Q1: What was the purpose of doing the control experiment? The purpose of doing a control experiment is so you have data to base your experiment off of. Q2: Compare the results for the force for the various trials. Our second trial had the smallest force because the cart was not moving as fast due to the ramp being at a lower elevation Q3: What is the importance of keeping everything constant between trials except for the independent variable? It is important to keep all the variables the same exept your independent variable because then you are able to see how the variable effect the outcome and the data. "Automobile." Britannica School. Encyclopedia Britannica, Inc., 2014. Web. 21 Feb. 2014. "Henry Ford." Britannica School. Encyclopedia Britannica, Inc., 2014. Web. 21 Feb. 2014. "vehicular safety devices." Britannica School. Encyclopedia Britannica, Inc., 2014. Web. 21 Feb. 2014. 2 Our hypothesis was

Transcript: Automobile Choices and Alternative Fuels Olivia Gregory Alternative Fuels Living in an apartment with two roomates $2,000 graduation gift to help with the purchase of a car Single person Commute to job every day, 20 miles away Electric Reasons 1. Car can be charged at home or work 2. Simply adds cost to electric bill 3. Car is stylish [Appropriate for work] Environment Lifestyle Economy Costs around $100,000 to purchase 250 miles per charge Lease at $1,658 a month Purchase Plan There are many locations throughout the US There are locations in Washington, DC and New York City [i.e. wind power, hydro power, etc.] Domestically produced from renewable resorces 420 million gallons of gasoline are burned each day in the US Personal Finances Cost per gallon is $2.96 Created from vegetable oils and animal fats Can be used in fuel cells to power electric motors Compressed Natural Gas (CNG) Car Choice Runs around $1.50 per gallon of gasoline equivalent Electric Impact Electric motors are powered by rechargeable batteries Because I have roomates to help with rent, I can afford to spend a little more on a car that is better for the environment Comprised of methane The efficiency of electric fuel varies by region Though possible to simply cause increase pollution from electric power plants, owners can specify which source you'd like the electricy to come from The main source of hydrogen fuel is methane, but can also be obtained by splitting H2O mollecules Hydrogen The End 20 lbs of CO2 are released per gallon of gasoline burned Rent is $450 a month About 200 million tons are released by US drivers into the atmosphere per year Current cost per gallon is $2.38 If I'm going to spend a lot of time in my car, mine as well enjoy it Cleanest burning alternative fuel My Situation Ethanol is an alcohol-based fuel, created by fermenting corn Biodiesel Ethanol