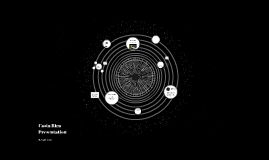 Transcript: The blue, white and red horizontal design was created in 1848 by Pacífica Fernández, wife of then president José María Castro Madriz. Fernández was inspired by France's 1848 Revolution, and the creation of the French Second Republic! Costa Rica has a population of 4.5 million and a life expectancy of almost 77 years, one of the highest in the world! Talamanca Range-La Amistad Reserves / La Amistad National Park Cocos Island National Park Costa Rica Presentation Costa Rica in spanish is actually Costa Rice. The flag of Costa Rica Capitol And 2 Main cities Food Fun Fact! Map Location Costa Rica in spanish is actually Costa Rice. Goalkeeper who joined the Costa Rican national team in 2008; named CONCACAF Gold Cup Best Goalkeeper in 2009. Name Of Costa Rica In Spanish Harry Shum Jr. Costa Rican-born actress who appeared in such Mexican telenovelas as Tú y yo and Serafin. She was a beauty pageant contestant, winning Miss Costa Rica. Costa Rica has 25 different famous soccer players! By Noah Arent #3 #1 2 Unesco Sites The Costa Rican Flag adopted the colors of the French tricolor. The blue on the flag stands for the sky, opportunities, idealism and perseverance. The white on the flag stands for wisdom and happiness. The red on the flag stands for the blood spilt by martyrs in defense of the country, as well as the warmth and generosity of the people. Costa Rica in spanish is actually Costa Rice. Costa Rica uses the money called a Costa Rican Colon. One U.S dollar is the same as 530.010 Costa Rican Colon's. Name Of Costa Rica In Spanish Costa Rica is located in Central America between Nicaraugua and Panama Maribel Guardia Keylor Novas #2 Money Costa Rica Uses Casado, or Comida Tipica, is the most common dish in Costa Rica. It consists of beans, rice with finely diced red bell peppers and onions, fried plantains, a cabbage salad with tomato and carrot, and a choice of meat between chicken, fish, pork, or steak with grilled onions. The capitol of Costa Rica is San Hose. One main city is Puerto Limón , Limón it has a population of about 63,081 people. Another main city is San Francisco, Heredia it has a population of about 55,923 people. Fun Fact! Fun Fact! Three Celebrities Costa Rican actor and dancer best known for his role as Mike Chang on Fox's Glee and for the role of Magnus Bane in the series Shadowhunters. He also had roles in several dance films. 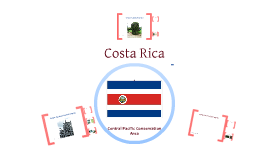 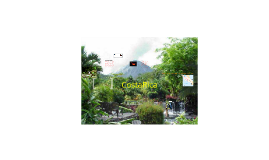 Transcript: costa rica weather can usally only get up to 80degrees & only goes down to about 70degrees in the day the climate usally doesnt change around that much because its very tropical over there. The driest time of the year is through January and March, the wettest months are September & October. When its summer here in the u.s its winter over there and so obiviously when its winter over here its summer over there, so they celebrate christmas in the summer, rather then to in the winter like us. Volcanoes Costa Rica is known for its huge volcanoes can make a horrible scene when disaster strikes. One of the most famous volcanos in Costa Rica is the Arenal The Arenal volcano is 5,437ft tall and right now it is currently in a resting phase, but for the past 43years is has errupted many times with major and minor erruptions,causing great damage to its surrounding land and people. San Jose the capitol of Costa Rica. what is it about water falls that leaves people invorgated and powerful? It has been scientific proven that the water in the falls have tiny particles known as negative ions that are known for giving people good health and leaving them in a good mood with great energy. this waterfall here is the Nauyaca waterfall located in Dominical, Costa Rica, it gets 1,000s of visitors each year because of its elegance and insperation it gives out to many people! The rainforest,is mainly why costa rica gets so many visitors each year, they take up more than a quarter of costa rica's total land area and has up to 10,000 species, plants, and trees! CostaRica Costa rica weather Rain Forest Waterfalls 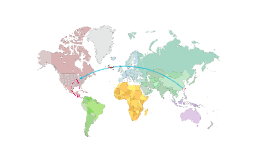 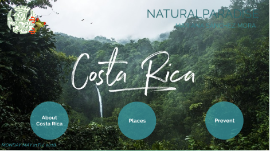 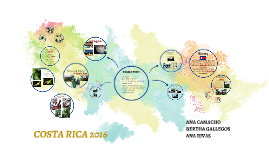 Transcript: Purpose of this war was to prevent the United States to conquer Central America to expand their territory. William Walker was the one who led US army Juan Rafael Mora was the president of Costa Rica during that period of time. Avocado Tree JAUURI December 22, 1856 The main purpose for this battle was to cut all access of the San Juan River where US ships navigated through there to supply Walker’s army lasted 45 minutes 11 Costa Ricans died in battle They won the battle and this led to the end of Walker’s regime. COSTA RICA 2016 ANA CAMACHO BERTHA GALLEGOS ANA RIVAS 1502 - Christopher Columbus makes the first European landfall in the area and names it Costa Rica which means rich coast. 1949 - The abolition of the military was introduced in the Costa Rican Constitution. INDIGENOUS AREA EXTRACURRICULAR ACTIVITIES Batalla de la Trinidad RURAL AREA 1 TEACHER/1 GRADE SOME STUDENTS ARE BILINGUAL EDUCATION PROVIDENCIA ESCUELA PROVIDENCIA DE DOTA (March 1856 - May 1857) SAN ISIDRO DE LA TIGRA NO ARMY 95% LITERACY RATE PRIMARY & SECONDARY ED IS MANDATORY PUBLIC & PRIVATE SCHOOLS SECOND AND MORE LANGUAGES RURAL SCHOOLS SAME UNIFORM Amphibian Red-Eyed frog 4 species of monkeys in Costa Rica 1. the White-faced monkey 2. Howler or congo monkey 3.Spider monkey 4.Titi or squirrel monkey in Costa Rica My Favorite part of the trip April 10, 1856 Village of Sardinal, Sarapiqui, Costa Rica Was a strategic move The purpose of this battle was to prevent Walker's soldiers to come through the Sarapiqui River and have access to the interior of the country La Gran Guerra Patria MY FAVORITE PART OF COSTA RICA My favorite moment FEW CLASSROOMS 1 TEACHER/SEVERAL GRADES KINDERGARTEN Butterflies History Flora and Fauna Batalla de Sardinal Birds 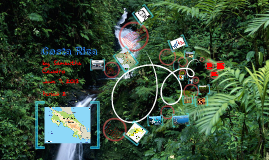 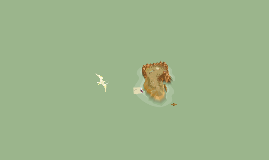