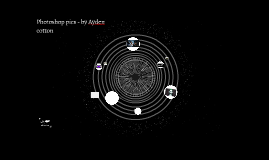 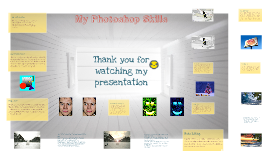 Transcript: My Photoshop Skills The first tool I used was the rectangular marquee tool. Then, I learned how to fill in the boxes I made I also learned how to group things together so they're attached. Aside from the rectangular marquee tool, I used a similar one called the elliptical marquee tool and different types of fill colours and designs like gradient. For a beginner, I was proud of how it turned out! I added a texture and gradient to the square. I used a bevel for the circle to make it look like a button. I added a drop shadow to the triangle to make it look a little 3D while it's overlaying the square. For my custom shape, I picked a music note for which I added a glow. Since all these shapes are a little bit plain, I used bright colours to make it stand out. The cool thing I learned about Layers is that you can change the order of them to make things on the bottom or top. The filter I used for this was an artistic one. Since this is a hockey picture taking place out in the open near the mountains, I wanted to make it look like there was a snow storm going on and I think it turned out pretty nice. This is one of my favourite Photoshop filters called Lens Flare. In between the two mountains, seen down the middle, I made it look like there was either a sunrise or sunset. I feel like this filter changed the mood of the picture...it sort of give's it that "eat, sleep, hockey" vibe. This was one the pictures I was most proud of editing! For this edit, I took a picture of a beach sunset and used the layers tool to put it behind the original cut picture. For this edit I wanted to make it look like a big wave with coming upon shore and I did the same exact thing with the layer tool. I took a picture of a wave and put it behind the original. I was proud of both edits, they came out better than I expected. The adjustment tool is very easy to use and allows you to change levels, hue/saturation, exposure, etc. For one of the edits, I changed the hue/saturation to give the picture a blue tint and I also did the posterize effect. It gave it an artistic look. For the second edit, I made the exposure level very high and since it's an outdoor picture, it made it look sunny. I really like the blue tint one because I think it looks artistic! Take a look... This was a fun and easy tool to use. It gives you the opportunity for example, to edit a face for any flaws. I edited a picture of Harry Styles and I made his skin look picture perfect as well as fix any blowing hair. I also got rid of the shininess on his face and the bags under his eyes. I used the healing tool and if I made any mistakes I would use the spot healing tool. Here's the difference between the original and edit... Thank you for watching my presentation This was one of my favourite activities to do because I like using all kinds of filters! I've never used Photoshop, so to see what kind of filters it had to offer was awesome. I've used many similar ones, not necessarily the same though. I'm only going to show two of the ones I liked best... The Type Tool When we first started Photoshop, I thought it was going to be very difficult; especially as having this as my first task. It turned out MUCH better than I expected. I think I would definitely make it look much better because I have picked up all the skills I need! I knew how to use the transform tool because we worked on it a lot on Fireworks. The task was to take a picture and put it into a billboard and I found it quiet easy. All I had to do was take a picture of cheesecake and a picture of a billboard, distort the cheesecake and resize it to fit in the billboard. Layers and Shapes Photo Editing Just a little colour My first creation The Transform Tool This was one of my favourite activities. I took a picture of Crosby skating alone on the ice and I wanted to make him stand out even though he was alone.Although the picture was dull to begin with, I wanted to show off how well I could make him stand out. So I added more saturation to the original and then duplicated the layer and made it black and white. I cut out the shape of Crosby and deleted it causing him to be colour. I added a blur to the black and white layer and voila! I was very proud of this one, I think it looks pretty awesome! First is the original, then the edit... Adjustment Tool Using Filters You can do lots of cool stuff with the type tool and I thought the coolest thing is the type mask tool. It allows you to type something and takes the background of what you're typing on. I saw that one of the examples was a fall inspired picture and I thought that since I really like Christmas, I can do something cool with that. So I took a picture of lights and got my "masked" text and then I took a picture of a Christmas tree and blurred everything except for it. I think it look's pretty cool, I wouldn't mind using it as a wallpaper! My First Creation Retouch and Healing Tool I learned some very important things while working on this activity. Learning about 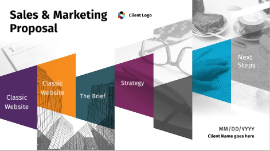 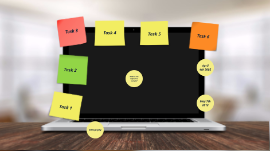 Transcript: Task 1 Jan 1st 1988 Photoshop is Born. This was the day that Photoshop had been completed and the creators were now looking for a buyer. Colours were very basic and they didn't have much technology to enhance the colours as much as what they can do now. Add as many notes as you need Task 2 First version distributed commercially as Barneyscan XP The Knoll brothers (Creators) won over Adobe management with their product and formed a liscensing partnership with Adobe that would launch their software. September 1st 1989 Task 3 The handling of colours slowly improved If you wanted to have something photoshopped, it would come at a high cost with prices of $300 an hour for basic photo colour editing February 1st 1990 Task 4 File size of photoshop became larger as more features were added to it, also to enable it to run smoothly without lagging or interruptions. June 1st 1991 Task 5 Photoshop 3.0 was created and contained layers which were a large advancement. Layers allowed artists to create a variety of different images as well as edit images for magazines and newspapers. September 1st 1994 Task 6 Photoshop 7.0 allowed editors to go through folders to find the graffics they wanted. The brush pallette also featured a number of changes such as a healing brush tool, patch tool and custom brushes. March 1st 2002 April 4th 2005 The red eye removal tool, vanishing paint tool and smart object tool introduced. Smart object allowed the user to enlargen a photo wihtout loss of quality. April 4th 2005 May 7th 2012 auto and background save enhanced croped tool move tools blur galary May 7th 2012 What is the impact on society? Photoshop has had impact on society as it can change someones appearance. This program also has the ability to crop or completly get rid of something. People that are using Adobe photoshop have the ability to change what they look like. For example how tall they are, how short they are, how skinny or fat, hair colour, eye colour, skin colour, shape of face or shape of anything. Celebraties are also using this program and then posting it on the internet. By people using photoshop it can also define makeup and any type of look that you would like. Photoshop can change the colour of backgrounds and anything that you wish to. Now days you dont have to pay money or take your photo somewhere to have it edited. Your phone now has its own little bit of editing on it when you decide to take a picture What is the impact on society? photoshops Bibliography https://www.timetoast.com/timelines/history-of-adobe-photoshop Bibliography 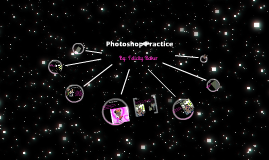 Transcript: By: Felicity Baker I added the sunglasses picture and cut it out. Then, I pasted it on over my glasses. I added the L.A. background and cut out the picture of me to act like I took that picture in L.A. I clicked on the Clone Stamp and Alt-clicked on my eyes. Then, I just drew the eyes on my forehead. After that, I shaded around the eyes on my forehead a light brown color. I used the paint brush and just used the color red to get red eyes. Red eyes Minnie Mouse Photoshop Practice Me with Selena Gomez. Four Eyes I used the paint brush and made my teeth look white. I went to filter and clicked on Liquify. Then, I just went on and liquified myself. Liquified. I cut out my face and added the Minnie Mouse picture and pasted my picture on her body. Darker everything. Original picture White teeth Pink Sunglasses I went to filter and went to Brush Strokes and clicked on Dark Strokes. In L.A. I used the Magnetic Lasso tool to cut out my face and then I added this picture and I pasted my picture with Selena Gomez. 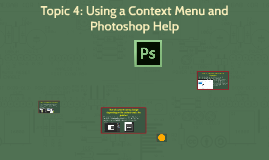 Transcript: Ana Sofia Ortiz #20 What can you find in Photoshop Help? For every different tool you want to select you double click and the context menu option opens. Depending on the option you want to use you can find all the tools in the left side of the screen. In the official website for Adobe Photoshop you can find detailed step by step guides on how to do anything. If the tutorials still don't help you solve a problem, you can contact support to talk to real people who can help you, and if you make mistakes they can identify them. For more information on setting options for a specific tool, search for the tool's name in Photoshop help. If you don't remember in which tab a tool is located, you can search for it in Photoshop help Find answers, tips, software updates, and more. Topic 4: Using a Context Menu and Photoshop Help How do context menus change depending on the content under the pointer? Marcelo Benitez #3 Mauricio Garcia #8 PRESENTATION MADE BY : Photoshop Help has all the answer for any question 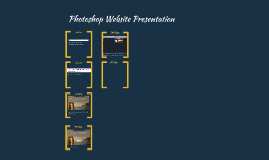 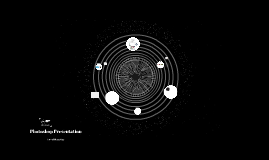