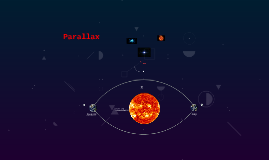 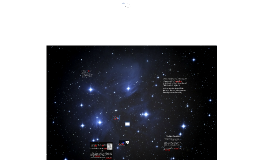 Transcript: * Depth perception * The brain utilizes parallax to perceive depth through a process known as stereopsis * In this case, the baseline consists of the distance between the eyes which is typically 6 cm * Allows us to see up to tens of feet *Babies have a well developed sense of depth by 18 months *Pidgions have to bob their heads in order to perceive depth Race to the stars ᶿᶿ * Today's excepted value is 0.287 arcseconds Parallax Given the time it would take for each measurement, finding the perfect candidate was vital Friedrick Wilhelm Struve 1793 – 1864 The Race was on Thomas Henderson 1798-1844 By the 18th century, astronomers had a better understanding of the motion of stars and began to look for candidates based on how fast they appeared * Today's accepted value 25.05 light years Before the 18th century astronomers believed the stars shared the same properties so they based the distance to the stars on brightness * Measured the parallax of 61 Cygni Parallax now and why it is important * He found the parallax to be 0.2613 arcsconds-roughtly 26 light years Stellar * Measured the parallax of Vega Friedrick Wilhelm Bessell 1784 – 1846 d = 1/p * Bessel was the first to publish his findings *Who actually won the race to the stars is a toss up because Henderson chose not to publish his findings sooner because he did not have confidence in his measurements * Parallax solidifies the heliocentric theory Parallax [par-uh-laks] noun the apparent displacement of an observed object due to a change in the position of the observer. Origin: 1585–95; < Greek parállaxis change, equivalent to parallak- (stem of parallássein to cause to alternate, equivalent to para- para-1 + allássein to vary, akin to állos other; see else, allo-) + -sis -sis *Today parallax is also measured by satellites and by photography and digital imaging techniques BEFORE WE REACH FOR THE STARS!!! * Fixed objects closer to the observer have greater parallax than objects farther away Hirshfeld, Alan. Parallax : the race to measure the cosmos. New York: Henry Holt, 2002. Print. Components of a parallex That is, assuming stars travel about the same speed and in the same direction, stars that are closer to earth would appear to have a larger proper motion than their counterparts farther away * Measured the parallax of the star system Alpha Centauri * He found the systems parallax to be a little more than one arcsecond, putting it at a distance of 200,000 astronomical units Photometric Technique * Two lines of sight (2 locations) that create a BASELINE 2 Work Cited 1 parsec=206,265 AU 1 parsec=3.0857X1016 m 1 parsec=3.2616 light years d *Henderson, Bessel, and Struve worked independently from one another using different instruments 1 Au Parallax and Distance Measurement http://lcogt.net/spacebook/parallax-and-distance-measurement Because stars and the earth are so far apart, identifying parallax was no easy task Stellar Parallax ---------------- * Understanding the distance to the stars along with other properties allows us to deduce the masses, temperatures, life cycles and nature of stars * Baseline = 2 astronomical units (186 million miles) * Parallax is used to find the distance between the sun and the stars *Distance d and Parallax p take the form d = 1/p where d is measured in parcsecs and p in arcseconds * Today's excepted value is 0.72 arcseconds Guillot, B.J. Distance: A History of Parallax and Brief Introduction to Standard Candles. Houston, TX * With hundreds of positions and thousands of measurements, he found the parallax angle to be 0.348 arcseconds from earth 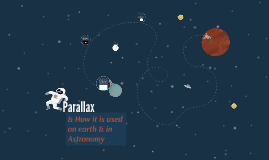 Transcript: How do we use parallax on the earth? On the earth you could use the parallax formua's to measure distances; this called trigonometric parallax. You can also use the parallax affect to create 3D images. You can use parallax to measure and find the exact position of a star. You can see how far away the star is away from you, and from the earth. Parallax is a perspective on either side, like, if you look up at a certain star in March it will appear to be in a different spot then if you look at that same spot in October. Due to the parallax our measurments of the star are going to be different. Parallax & How it is used on earth & in Astronomy What is Parallax? How do we use Parallax in astronomy? 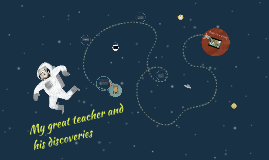 Transcript: Aristotle -Aristotle also taught Alexander the Great -Aristotle died at the age of 62 at 322 BC -Aristotle was intrestd in Biology, Zoology, Physics, Metaphysics, Logic, Ethics, Rhetoric, Music, Poetry, Theatre, and Politics Government http://tinyurl.com/zbhh82c Thanks for watching aristotle, a Greek philosopher and scientist born in the city of Stagira, Chalkidice. He's is responsible for creating parallax. My great teacher and his discoveries What is Parallax How does aristotle think of the universe? Aristotle belived that the Earth was in the center of the universe and the sun and other planets rotated around it. Parallax is a displacement or difference in the apparent position of an object viewed along two different lines of sight, and is measured by the angle or semi-angle of inclination between those two lines. Some fun facts http://tinyurl.com/hvkd3lc http://tinyurl.com/ztsltcc http://tinyurl.com/hkb8olg Who created Parallax? 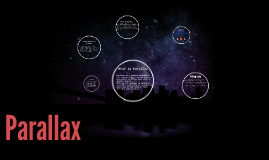 Transcript: Examples More Examples Discoverer(s)/Finder Diagrams At night during different times of the years different stars may come in and out our view. Also, this may affect our ability to track stars and distance. We can tell how far away a star is by the angle of the Earth. If we drew a straight line to a star, and move slowly to the right on the Earth, we can measure that line to see how far away that star is. Bibliography What is Parallax Parallax The way this is used in space is view of stars. If you move on Earth only a little bit, it may completely move a star a billion light years away out of your view. Parallax is a natural phenomenon that causes sight from one angle of any object to differ your view of another object. This can be imagined by moving to one side, eventually not everything will stay in you field of view, it's the same in space. Cannon, Kevin. "Scientus.org." Copernicanism and Stellar Parallax. Sant, Joseph, 2012. Web. 13 Jan. 2014.http://www.scientus.org/Copernicus-Stellar-Parallax.html Hyper Physics. Parallax. Digital image. Stellar Parallax. Hyper Physics, n.d. Web. 14 Jan. 2014. <http://hyperphysics.phy-astr.gsu.edu/hbase/astro/imgast/stelpar.gif>. On Tuesday, January 7, the first major solar flare of 2014 was witnessed all across the world. Planes had to be canceled and even forced a private cargo mission to the International Space Station to be canceled. The Sun spot that created this massive solar flare is the size of 7 seven Earths and is one of the biggest ones in 10 years. The early scientists Galileo and Copernicus knew about Parallax but could never prove the theory. Finally 200 years after Galileo's death Friedrich Bessel was able to explain this phenomenon. First Major Solar Flare of 2014 Space Agency, European. "Premier Cosmic Catalogue Updated." Space.com. Live Science, 27 Oct. 2007. Web. 14 Jan. 2014. <http://www.space.com/4503-premier-cosmic-catalogue-updated.html>. 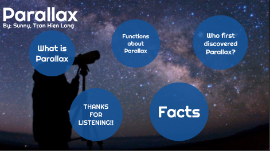 Transcript: Parallax By: Sunny, Tran Hien Long Parallax is a type of technique that stars change their position between North(July) and South(January). What is Parallax What is Parallax Functions about Parallax Functions about Parallax Parallax does have functions. The first thing you have to do is put your right finger and put it in the middle of your face. Next, close any eyes and look at the stars. Lastly, open your closed eye and closed your eye that you look. The star will change it's place. It's kind of like your left eye is July and your right eye is January, right? That's why the star changes it's place Who first discovered Parallax? Who first discovered Parallax? The first person who had discovered Parallax is Friedrich Bessel, a German scientist. Bessel first discovered Parallax since the year of 1838. Facts Facts From 1989 to 1993, a Hipparcos satellite measure stars using Parallax over 100,000 nearby stars! The term parallax here is the angle between two sight-lines to the star. Astronomers use another technique called The Principal of Parallax to measure distances to celestial objects that also includes Moon, Sun and especially stars Make sure to explore stars using Parallax at home. Once again, thanks for listening. THANKS FOR LISTENING!! THANKS FOR LISTENING!! THANKS FOR WATCHING!!! Hear this song if you feel victorious or confident. https://www.youtube.com/watch?v=OSQCKIxDxk0 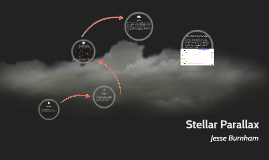 Transcript: While it is known that Tycho Brahe, a well known and extremely influential astronomer observed the parallax of a comet in 1577, Friedrich Bessel was the first to successfully measure the stellar parallax for the star 61 Cygni in 1838. The Math Behind Parallax Origins Parallax is the angular distance made between a certain stellar objects apparent motion in space when observed from two different positions in space. 90 - y Jesse Burnham If we know the angle that is made from Earth's position in January, '90 - y' using the trigonometric function Tangent, we get the equation: tan 90 - y = x/r. Which allows us to arrive at a precise distance from our solar system to an object in space. This angle is always measured using Earth's orbital position in January and July, which is on the complete opposite side of the sun. This allows us to draw a perfectly straight line between Earth's two positions in space, and use basic geometry to find the degree of the angle that the object makes in space. With this we can obtain the stellar objects distance from our solar system. Stellar Parallax Stellar Parallax is the angle that is formed when we look at the apparent position of a certain stellar objects location in the sky in relation to that same objects apparent position from a different location. Owls.... Earth in January Earth in July x Parallax Owls are a great example of demonstrating parallax when the hunt by bobbing and weaving they're bodies to better perceive their prey's location. By swinging their head from left to right, similar to how we measure parallax from the farthest two positions in our orbit, they take into account the objects behind their target and their relative distance to each other in order to carefully identify the position of that target. Earth in July R Earth in January y Stellar Parallax 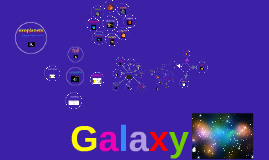