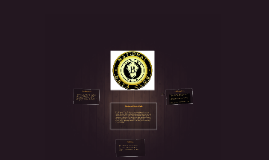 Transcript: Club Officers Beta Club Criteria Club Requirements President Vice- President Treasurer Secretary Historian Elementary Division(5th grade)- $65 yearly dues Junior Division(6th-8th grade)- $65 yearly dues Existing Members(7th- 8th grade)- $50 yearly dues National Beta Club Students must maintained an A/B average and S in conduct throughout the school year Student are required to complete 10 Community Service Hours Students are required to attend 6 meetings throughout the school year FONTS Club Fees Scholars who have demonstrated outstanding academic achievement, exemplified worthy character, and maintained a commendable attitude throughout the 2015-2016 school year will be invited to join the Elementary division for 5th grade or the Junior division for Middle School of the Leadership Preparatory Academy Chapter of Beta. The National Beta Club is the largest independent, non-profit, educational youth organization in America. And for more than 80 years, it has prepared today's students to be tomorrow's leaders. The mission of National Beta Club is to promote the ideals of academic achievement, character, service and leadership among elementary and secondary school students. “Let Us Lead By Serving Others” 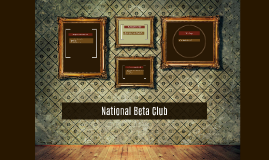 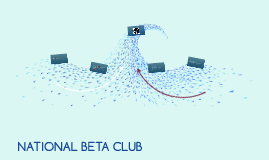 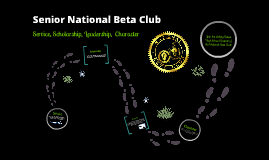 Transcript: Join the Ashley Ridge High School Chapter of the National Beta Club! Character is in every aspect of life. Members of the Beta Club have the best character and want to help the people around them. Every member of the Senior National Beta Club is expected to be a leader in their community, school, and club. Lead by example and lead others to uphold the other qualities of the Beta Club. Leadership Service, Scholarship, Leadership, Character Service We service our school and community by volunteering and conducting service projects. Ex: Sponsor The Make A Wish Foundation The Beta Club's members are expected to uphold certain standards of scholarship and academics. Character Senior National Beta Club Scholarship 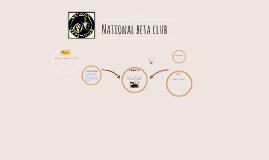 Transcript: What Is The Purpose Qualifications for membership are worthy character, good mentality, creditable achievement, and commendable A non-profit, leadership-service organization for high school students The purpose is to stimulate effort, reward achievement, and encourage and assist its members to continue their education after high school 1st Thursday of every month, Room 243 Sponsors Audrey Aikman It's membership is by invitation only and you don't have to pay anything Dues Qualifications National beta club You must attend Russellville High School for one full semester and must have a GPA of 3.0 or 4.0 Eligibility Meets 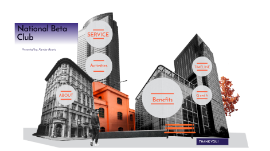 Transcript: Presented by: Xander Reavis THANK YOU! National Beta Club ABOUT OUR Club The National Beta Club is built off of all the different BETA clubs across the country from Highschool to College level SERVICE What do we do? The National Beta Club was founded on the principles to teach young adults and students how to be active in their comunities, and give back to the people around them in better service of themselves and others. To do more of a selfless cause for the greater good of society PROBLEM PROBLEMS 01. 02. 03. The lack of young adults who take part in comunity affairs Lack of parenting and lessons taught to the younger generations No one respects their comunities anymore, nor do they get involved in it SOLUTION SOLUTIONS Beta Club looks to teach teens how to be productive members of society teaches students how to complete their work, and finish projects without incentive Beta club hopes to teaches the members how to benefit society, their community, and their country Activities Activities taken part in Beta Beta club members are required to do community service hours every month Beta members are asked to large events, or political, local, or federal events Beta Club goes to a state, and national level competition in different events based around skills, and abilities Beta members take part in out of school activities that would benefit their communities Benefits Benefits of being in BETA The Benefits are all skills that you develop while in BETA club based around the ideas of supporting your community, and making you into a strong voice in the things around you. BETA club offers it's members schollarship, and internship programs to help advance their career. BETA club also offers leadership, teambuilding, and coworkmanship between you and those around you life skills you'll need later in life TESTIMONIALS TESTIMONIALS " " " "Because BETA offers a sense of pride among those students involved, it engages our community and parents to be involved in their children's educational career, and it gives all students an opportunity to have a voice and to shine in ways other activities in our small rural district may not." Vernon, FL "The Beta Club has opened so many doors. If I didn't get involved with The National Beta Club I would not be in college right now." Former member and scholarship recipient, FL "At Broyhill not only was I given the opportunity to get to know other Betas, I got a better understanding of myself. There it became clear to me what kind of person and leader I want to be." Broyhill Leadership Conference attendee, OH from BETA Club members across the country TIMELINE Meetings times BETA has to have completed 6 hours of comunity service every month per member BETA inductees will do a "BETA BOOTCAMP" every year to help with team building and leadership exercises BETA Regional Conference is where a BETA member can compete in a competition of a skill they are good at with the chance to go to the National level meetings are the first Thursday of every month BETA club has an induction ceremony every year for new members BETA members go to the National BETA convention Q and A Q and A does BETA Club have dues? Is there a limit on how many members can be in BETA club? What is BETA club? Yes, but its $10 once a year No BETA club can have as many members as can be accepted BETA club is a national club where it's members are taught to be active members in their communities, and leaders with their peers 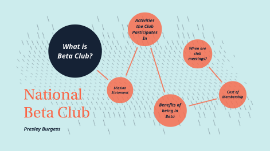 Transcript: National Beta Club Presley Burgess What is Beta Club? National Beta Club is a non-profit organization that promotes leadership and communitee service. What is Beta Club? How to get in National Beta Club is an invite only club that requires a cumulative GPA of at least 3.0-3.49. You also have to have been enrolled at RHS for at least one semester of your sophmore, junior, or senior year. How to get in Mission Statement To promote the ideals of academic achievement, character, service and leadership among elementary and secondary school students. ACHIEVEMENT - Recognizing and honoring high academic achievement CHARACTER - Preparing young people for life and empowering them to be successful LEADERSHIP - Developing the leaders of tomorrow SERVICE - Demonstrating our motto: Let Us Lead by Serving Others Mission Statement Qualifications for membership Worthy Character Good Mentality Creditable Achievement Commendable Attitude Qualifications for membership Activities the Club Participates In Members of the RHS Beta Club must complete at least 3 hours of communitee service each school year in order to remain in the club. A handful of participants can also go the the Beta state convension and compete in a variety of different subjects. If you win first place at state you are eligable to compete in the National Convension. Activities the Club Participates In State and Nationals: Continued State and National Convension is a super fun and cool opportunity to showcase your talents, skills, and creativity. The list of competitions that you are able to sign up for is endless (includes jewelry making, poetry, speech, acting etc.) National Convension also allows you to be able to travel to awesone places throughout the U.S. if you become eligable. State and National Convension Community service allows members to lend a helping hand in their community. It promites leadership and teamwork skills that help beyond a high school setting. There are tons of different ways to serve in the community such as: volunteering for school events, participating in park clean ups, volunteering at the animal shelter, etc. Community Service Community Service Benefits of being in Beta Beta club teaches important life principles and promotes teamwork. Beta is also looks good on resumes and scholarship applications. In your senior year you can also get a Beta club cord to wear during graduation. Benefits of being in Beta Club The Beta Scholarship Each year the National Beta Scholarship Program offers over $300,000 in scholarships to Beta member in their 12th grade year that have shown outstanding behavior. The Beta Scholarship Cost of Membership There is a $15.00 membership fee to be in Beta club. Cost of Membership/Dues Additional Costs Throughout the year students have the option to participate in many different activities that may have a low cost, and can buy club t-shirts for a low cost as well. Additional Costs Beta club meetings are usually held the first Thursday of each month. At meetings we discuss upcoming events, community service opportunities, etc. When are meetings held? When are club meetings? 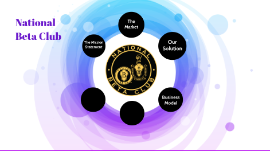 Transcript: National Beta Club The Mission Statement The National Beta Club is a student-centered organization that continually develops and nurtures individuals by providing opportunities and experiences which enable them to demonstrate the ideals of character, achievement, service and leadership in a global community. Mission Statement The Four Characteristics Achievement- Recognizing and honoring high academic achievement Character- Preparing young people for life and empowering them to be successful Leadership- Developing the leaders of tomorrow Service- Demonstrating our motto: Let Us Lead by Serving Others Activities Activities Conventions Leadership Summits Benefits Benefits To help your resume To become a Leader To express yourself Meetings Meetings 1St Thursday of every month