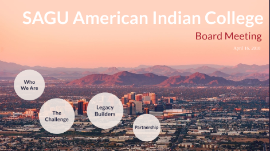 Transcript: SAGU American Indian College April 16, 2018 Board Meeting Who We Are Who We Are As an institution of higher education, we are passionate about equipping a new generation of leaders and committed ot the academic, professional, and spiritual development of every student. DETAILS DETAILS 1 2 3 4 History Location Athletics Program Academic Offerings New Degrees A.A. in Early Childhood Education A.S. in General Studies B.S. in Interdisciplinary Studies New Degrees THE CHALLENGE The Challenge Traditional Colleges are not equipped to accomodate the unique needs of many Native American students. As a result, many students elect not to go to college, or they return home before earning a degree. Across the Board Stats Across the Board Stats Native American students who elect to go to college. 8.5 % 82 % Native American students who drop out of college before earning a degree. SAGU AIC Stats SAGU AIC Stats 50% According to IPEDS- 3rd highest among Native American Institutions of Higher Education in Arizona Graduation Rate Retention Rate 66% Top 25% of Colleges serving Native Americans in Arizona Legacy Builders Legacy Builders This is where legacies are built Alumnus Vince Roubideaux Alumnus Vince Rubideaux Alumnus J.D. Lopez Current Student Taye Wilson PARTNERSHIP Employment Empowerment Advocacy Partnership 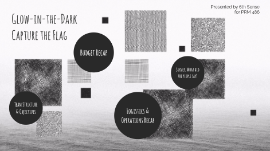 Transcript: Glow-in-the-Dark Capture the Flag Presented by 6th Sense for PRM 486 Team Structure & Objectives Team Structure & Objectives Team Structure Team Structure Group Members managed different aspects of the event process the theoretical event the practical event Communication Communication Prior to the event Group Chat & GOogle Docs Day of Event Group Chat TIMELINE TIMELINE Day of Timeline: Days leading up to the event: Table for the HQ, Waters, Flags, and all other major materials get to Tim so come event day he can use his truck to bring everything to and from campus 5:15pm Setup starts, we arrive at Old Main and Tim parks next to old main to drop all the materials off and we set up the two fields on either side of the fountain making sure they’re equally sized. We’ll set up our Event HQ and Water table centrally to the two fields, so if anyone has questions or needs water we’re there. We’ll layout all of the glow sticks and lay out the flags for the teams for when they arrive. This should take 30ish minutes to set up with time for adjustments if necessary. 5:50pm Students should be arriving by now and we will start breaking them up into their groups and give them their glow sticks, we’ll wait on the flags until after explain the rules. 6:00pm All the students have hopefully arrived and are in their groups. We’ll bring to explain the rules of the game and other notes for the groups. 6:08 Teams are broken up and sent to their fields, a little time for strategy and finally notes is given here 6:10 First games start with Groups 1 and 2 playing each other, same for 4 and 5 6:25 First round ends and Groups rotate and have time to break to get water. Final scores from this round need to be tallied now for the final results 6:30 Second round beings with Teams 1 and 5 playing each other, same for teams 4 and 2 6:45 Second round finishes and the groups break for water and rotate. Final scores from this round need to be tallied now for the final results. 6:50 Third round beings with groups 1 and 4 playing, 5 and 2 on the other field 7:05 Third and final round ends, the groups will meet back at the HQ to get water and to rest. Final scores from this round need to be tallied now for the final results. Difficulties Difficulties Because there are so many people in the group, it was difficult to coordinate schedules in order to work on the project Internally More organized timeline and job responsibilites Externally More of a "glow" factor More organized rules Changes for Next Time: Changes for Next Time: Budget Recap Budget Recap Stuck very close to given budget- especially in early stages Amazon price fluctuations Gave up game of dodgeball- dodgeballs were removed Ended up going over budget after switching pizza from Little Caesars to Papa Johns Logistics & Operations Recap Logistics & Operations Recap Job responsibilities were changed from the initial outline Group members were assigned a responsibility originally, then also helped out by doing other aspects Job Responsibilities Job Responsibilities The location changed several times before it was finalzed. Last minute changes to our location plans Location Location Materials and Supplies Materials and Supplies Materials changed over the course of the class More materials might have been beneficial Survey; What did the people say? Survey; What did the people say? We received 28 responses to our survey from our event on Monday, November 20th. 1: 0% 2: 3.6% 3: 28.6% 4: 39.3% 5: 28.6% How would you rate this event? 1-5 How would you rate this event? 1-5 Not Really? 14.3% Kind of 32.1% Oh Yeah!! 53.6% Did you have fun playing the game? Did you have fun playing the game? 12/28 Responses included a variation of Rule Clarification How could we improve the event? How could we improve the event? Yes: 28.6 Sort of: 71.4 Not at all: 0% Were the rule we explained and understanable? Were the rule we explained and understanable? I don't know: 25% No: 10.7% Yes: 64.3% Would you recommend this event to friends? Would you recommend this event to friends? 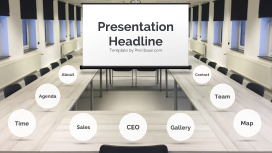 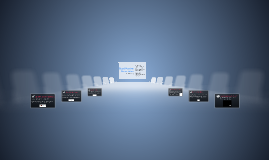 Transcript: Board Meeting Packet The superintendent and all board members should receive any necessary visuals and/or documents for the meetings in the form of a packet/binder. The superintendent will create such a packet. Documents and spreadsheets in paper form are always suggested, and if presentations are shown, slide handouts are beneficial. Unless the school district has a required document/agenda form, the superintendent will create a basic board meeting agenda form that includes all of the district information and school district logo/symbol. The date, location, and time of the meeting are highly important to include on each board meeting that will be held. "Every Meeting You've Ever Been To" - A Little Humor in Preparation for Future Board Meetings By: Brittany Long Purpose: The superintendent is to organize the school board meeting for the board members. EDAS 8311 The Superintendency Spring 2018 Agenda Information All board meetings will follow nearly the same agenda and be held in opening/closing ceremony fashion. Meetings will vary based on requested order of business, old business, new business, and personal discussions. Additional reports and Executive Session will only be held as as needed or requested by the school board members. Next Meeting Date It is HIGHLY important to announce the next board meeting date/time at the end of the board meeting. This is something that should be included in the meeting minutes and also made public via local newspaper and school social media/newsletter. Board Meeting Presentation Basic Meeting Agenda Board Meeting Preparations The superintendent is responsible for preparing all information and documents for the board meetings. Steps for this process can be managed differently within specific districts. However, the same basic steps are necessary for proper preparation. 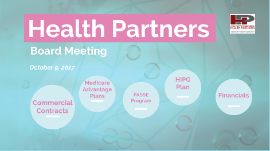 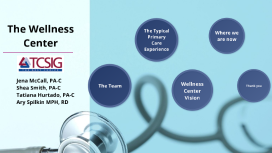 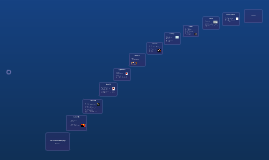 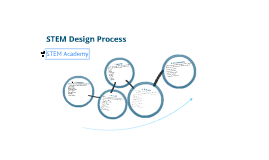