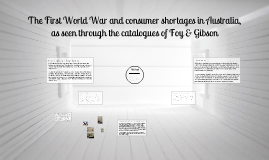 Presentation for "History for Historians."

Transcript: As part of this remodelling, the store expanded its selection of goods, offered seasonal sales, and issued regular catalogues—business practices still used by companies like Myer and David Jones. By the early twentieth century it sold everything from confectionary to clothing, offered a regional delivery service, and even manufactured some items locally. During this period, Foy & Gibson expanded their operations to Perth (1895), Prahran (1902), Brisbane (1903) and Adelaide (1907). The company was sold in 1955 to Cox Brothers, before closing entirely in 1968. Yet many of its buildings remain as landmarks in Collingwood. Prices variations or shortages? Discussion The first catalogue we have is for the winter and spring of 1913. Note that the prices are given for all items; including imported goods, such as cayenne pepper. The former Foy & Gibson factory and stable complex, on Oxford St in Collingwood. The significance of the catalogues Yet somewhat surprisingly, most goods remained available in the second Foy & Gibson catalogue, dating from the winter of 1918. At this point, the war was in its fourth year, having cost millions of lives and untold billions of pounds sterling. But besides the absence of prices for most items, the war appears to have had little effect on the availability of consumer goods. The outbreak of war in Europe in 1914 caused tremendous disruption to the world economy. Despite her remoteness, Australia was not exempt from this disruption. The nation was, at that time, strongly linked to British international trade. Indeed, it was significant that the Prime Minister Andrew Fisher pledged not only Australia’s last man, but also her last shilling to the defence of Britain—the burden placed upon the nation was to be not merely human, but material. As such, it might be expected that shortages or price rises of goods, due to disruptions to their manufacture or transit, might be reflected in Foy & Gibson's catalogues. Collingwood Historical Society, “Former Foy & Gibson factory buildings.” 2011. http://www.collingwoodhs.org.au/index.php?p=2_3 (accessed 26 May 2013). Dyster, Barrie and David Meredith. Australia in the Global Economy: Continuity and Change. Port Melbourne: Cambridge University Press, 2012. Foy & Gibson Pty Ltd, "Autumn and winter catalogue, no. 44, 1913," Foy & Gibson Collection. The University of Melbourne Archives (Brunswick, Victoria). ———, "Winter catalogue, no. 54, 1918," Foy & Gibson Collection. The University of Melbourne Archives (Brunswick, Victoria). The First World War and consumer shortages in Australia, as seen through the catalogues of Foy & Gibson A similar story is told by the illustrations of ladies' garments from the same catalogue (winter 1918). Note the prominent pleats on the skirts and blouses, and the generally loose fit. Unlike the rather frugal cuts of clothing which appeared during the Second World War, due to textile shortages, these clothes indicate that fabrics were in relatively plentiful supply. Sources Note that whilst prices for some items cannot be listed, most goods remain available. Whilst these catalogues are not revelatory, as they merely demonstrate what is already known about the Australian economy during the war, they provide an interesting insight into the social history of the period. Despite the horrific loss of Australian men in the war, life on the ‘home front’ retained much of its normality. As a net exporter, Australia suffered less from goods shortages than from a decline in export markets and credit. The true economic effects of the war would be felt in its aftermath, as international trade dried up—reaching crisis point during the depression of the 1930s, which impacted Australia particularly badly (largely due to its reliance on primary exports). Foy & Gibson were one of Australia’s first department store chains. The business was founded in 1870 by Mark Foy, an Irish immigrant. It began as a draper’s store on Smith Street, Collingwood, gradually expanding to six shops by 1880. It gained its name in 1883, when Foy decided to sell a share of the business to William Gibson, who had formerly worked at the firm of Mann, Byers and Co. in Glasgow. Foy died shortly thereafter, but Gibson continued to operate the company for several decades. After visiting the Bon Marche department store in Paris, during a trip to buy wares, Gibson was inspired to emulate the store’s model. A brief history, pt. 2 Foy & Gibson: a brief history The outbreak of the First World War Foy & Gibson’s seasonal catalogues were a key part of their business model during the early years of the twentieth century. They included listings of goods, frequently accompanied by illustrations, which had yet to be replaced by photographs as the dominant visual medium for advertising. Included were comprehensive prices for the season. As these catalogues were issued through the duration of the First World War, they provide an interesting insight into the availability and price 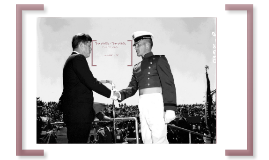 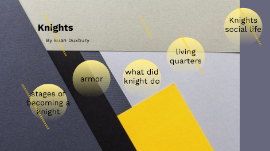 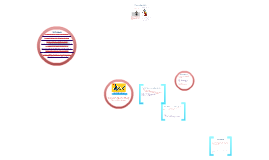 Transcript: The Chinese government organization The way we invent things http://china.mrdonn.org/silkroad.html Have you ever thought of the risks or the chances that we will have from invading China? Well, here they are. Q4. What dangers does the government organization have against us when we first start invading? The army's organization Topic 1 (Governments Organization) Q3. What illnesses can be cured using Chinese medicine? http://www.dynastiesofasia.com/asian-history-references/han-dynasty-period-in-chinese-history.htm The products that are used Topic 1 (Governments Organization) Using natural barriers for defenses http://questgarden.com/83/29/0/090608114524/process.htm http://www.cynthiasiulac.com/html/treatments.html Answer: It can not be hard retrieving these products if we go a certain way Obviously they speak a different language that we can't understand The Chinese Soldier The Chinese have more natural medicines and we have living things for medicines http://totallyhistory.com/han-dynasty-government/ Q2. What products are used in the Chinese medicines? Is it hard retrieving these products? Q1. What advantages do the Chinese have against us from their natural deserts, rivers, mountains, jungles or man made obstacles? Answer: They can always out-smart us http://en.wikipedia.org/wiki/Medicine_in_ancient_Rome Q1. What are the differences between the Chinese government and our Roman government? Water sources from the rivers When we are lost, they are not Chinese and Roman Soldiers We have a shields, but we only have one main weapon a javelin. The Chinese have three weapons and are swords. We don't have armor completely cover our bodies. Answer: Message The Chinese government's dangers of his organization Things that the government does that helps us Q1. What medicines have the Chinese invented that are different to our Roman medicines? Q1. Do we have a chance of winning this invasion on the Chinese’s own turf? Why? Farm crops Answer: What things has the Chinese government done that is different to what we do Topic 3 (Geography) ANCIENT CHINA http://www.unrv.com/government.php Answer: Answer: Answer: http://www.betterhealth.vic.gov.au/bhcv2/bhcarticles.nsf/pages/Chinese_herbal_medicine http://www.kwintessential.co.uk/articles/china/ancient-china-government/2379 Building to get pass obstacles Herbal The Chinese soldier has three swords (Dagger, Small sword, Jian) and are completely clothed, However they have no shields. The Roman Soldier Topic 2 (Medicine) http://www.cynthiasiulac.com/html/tui_na.html#top Q2. What advantages do we have against the Chinese from their natural deserts, rivers, mountains, jungles or man made obstacles? We have medicine for illness as well as issues, but the Chinese just have illness medicine Q3. Are there any lessons we could learn from the Chinese government? Answer: I think invading China is a no go. The cost of supplies we need, the 4,000 miles of walking, fighting off bandits, soldiers probably dying from the trip, it's just a waste of time, money and people. What's the point of invading if we are going to lose those things. So I think we should choose another country other than China. They know where they can over-power us during a battle or ambush We run our government different to the Chinese monarchy Q2. What part of China has the greatest chance for us to attack from? Why? http://prezi.com/olomlubmkrnb/the-medicine-defences-weaponry-and-geography-of-ancient-china/ It's their own turf The Chinese army being organized dangerously Acupuncture Answer: http://www.bbc.co.uk/schools/gcsebitesize/history/shp/ancient/romanmethodsrev1.shtml Q2. What makes the Chinese government organized or non-organized? Is it how they work, their own personality…? Should we invade China? References 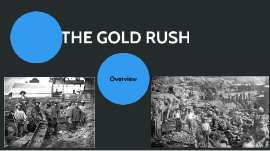 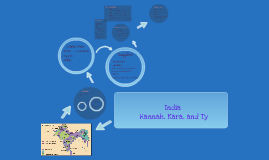 Transcript: India Hannah, Kara, and Ty -trading agriculture The Resistance tea and cotton In 1906 Muslims formed their own league to pursue their own goals Congress Party supported western style modernization Himalayan mountains Government Made law that Hindu widows could remarry India Includes: Sepoys - Indian Soldiers Indian nationalist leaders organized the Congress Party in 1885 LOCATION 1858 Parliment ended the rule of the East India Company Punjab Plain Colonial Power NATURAL RESOURCES Muslim League Thar Desert India is a peninsula located south of Pakistan and China and is septerated by the Himalayan Mountains Sepoys rebelled and marched to Delhi, they hailed the last Mugahal ruler believed in peaceful protests to gain what they wanted British East India Company - main goal was to make money Shares borders with China, Nepal, Pakistan, Bruma, Bhutan, and Bangladesh After 1858 India was under direct rule of Britain. - -forced to quit food production and to produce cotton (Industrial Revoluton) Geography -Britain -cotton production increased in Britain They wanted a greater democracy - 7th largest country in the world Large deposits of iron ore bauxite, aluminum ore, much of which is exported. Has many mineral resoures, inculding the world's 4th largest coal reserves A viceroy was used. - Concerned that Hindu rule would oppress Muslims -Supplies Supplies colonization Muslims and Hindus used to work together - British officials acted as leaders Indian National Congress Boardered by the Arabian Sea and the Bay of Bengal in the Indian Ocean. There Idea was to modernize India with western culture and technology. 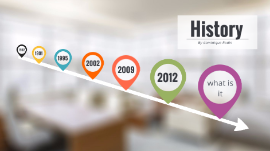 Transcript: History By dominique Rodin and Mathijs 1982 Talk about the history of your project Present Your Story 1991 Describe the events that happened Was This a Good Year? Add more pages into a date Create Subtopics Tim Berners-Lee releases files describing his idea for the World Wide Web. WWW debuts as a publicly available service on the Internet. 1991 August 6 1995 Closer to the Present List some important events what was is in egypt An Important Event Can't remember what it was Earthquake, War, Movie Awards? Sports Event, Business Timeline? Present about any topic what is it Is it here yet? 2002 Customize the Template Rearrange, duplicate and resize the elements 2009 January 20 Barack Obama, inaugurated as the 44th President of the United States of America, he becomes the United States' first African-American president 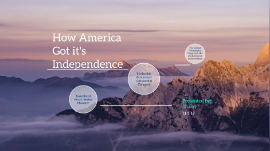