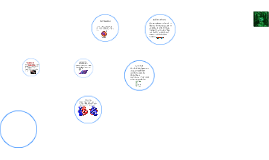 Transcript: Cell Membrane Cell Nucleus The Cell Nucleus is the brain of the cell. It controls all functions of the cell. Without a nucleus a cell is brain dead The ER packages proteins Mitocondrea Ribosomes make protein for the cell. They are very rough and rigid as shown below Cell Wall The Mitocondrea is the power source of a cell. It provides the cell energy to carry out its functions Ribosomes The membrane of a cell is like our immune system. It controls all of the things that go in and out of the cell. Both the plant and animal cell have this feature The Cell Wall protects the plant cell from harmful things. Its kinda like a membrane. Only plant cells contain these It works like a mail room endoplasmic reticulum (ER) 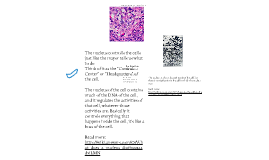 Transcript: The nucleus controlls the cells just like the mayor tells us what to do Think of it as the "Control Center" or "Headquarters" of the cell. The nucleus of the cell contains much of the DNA of the cell, and it regulates the activities of that cell, whatever those activities are. Basically it controls everything that happens inside the cell, it's like a boss of the cell. Read more: http://wiki.answers.com/Q/What_does_a_nucleus_do#ixzz1a2dxiLMN The nucleus is always located inside of the cell, but there is no rigid point in the cell in which the nucleus stays Read more: http://wiki.answers.com/Q/Where_in_the_cell_is_the_nucleus_located#ixzz1Yn07uNsx the control of the cell which contains the cells chromosmal d.n.a the function the control these are some pictrures of cells 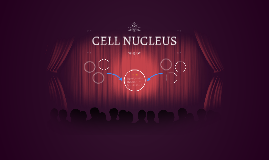 Transcript: Cell Nucleus DNA CELL NUCLEUS Nucleus means kernel in Latin. It's kinda like the brain of a cell. It has an outside layer that protects it from the rest of the cell. It controls everything that goes on in the cell. 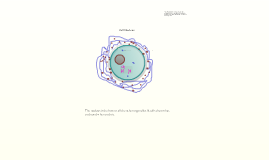 Transcript: When the cell begins to divide, the small and inconspicuous chromatin throughout the cell condenses into 46 thick and noticable chromosomes. Deep inside the nucleus is the nucleolus. It can account for as much as 25% of the nucleus' mass and is where ribosonal RNA is used to create ribosomes. Once a strand of mRNA is transcribed from a strand of DNA, it leaves the nucleus through a nuclear pore. The cell nucleus is the command center of the eukaryotic cell. It is responsible for instructing the other parts of the cell on what proteins to make and where to put them. The nucleus is the boss of all the other organelles. It tells them what to do and when to do it. Spread throughout the nucleus are strands of chromatin which contain DNA, the blueprint of life. DNA is the code for all proteins used in the body. Rough Endoplasmic Reticulum Ribosome The job of the nucleus is to transcribe messenger RNA from instructions from DNA. Cell Nucleus The mRNA then travels to ribosomes usually located in the rough endoplasmic reticulum which surrounds the nucleus. The nucleus is surrounded by a double membrane called a nuclear envelope. Other ribosomes are located in the nuclear envelope, in mitochondria or free floating in the cytoplasm. 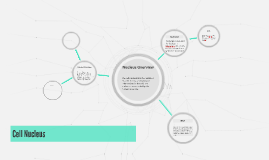 Transcript: Nucleolus The Nuclear Envelope, or Nuclear Membrane, is composed of two lipid-bi layers and surrounds the Nucleus. The semi-permeable membrane allows for certain materials to enter or exit the cell Nucleus through Nuclear Pores. The cell nucleus is in the middle of the cell, it provides and stores information for the cell. The nucleus is surrounded by the nuclear envelope. Nucleus Overview Cell Nucleus The largest structure in the Nucleus in Eukaryotic cells, mainly used to construct and synthesize ribosomes DNA Nuclear Envelope Cites DNA in cells is contained inside of the nucleus. In Eukaryotes, DNA encodes for the genome. DNA can also be located in mitochondria and plastids. RNA, or Messenger or RNA that is in the Nucleus is used to transmit information from the DNA to ribosomes where they specify the sequence of proteins in amino acids. RNA 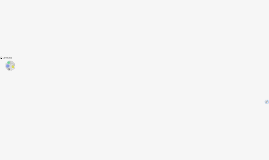 Transcript: The nucleus takes up 10% of a a cell's volumen. Making it the most prominent organelle. It is surrounded by a two-layer membrane called the nuclear envelope. The envelope has pores. Inside the nucleus you find the Nucleoplasm, DNA, and the Nucleolus. Cell Mitosis has 4 stages: Prophase, Metaphase, anaphase, and telophase. Before mitosis the cell copies it's chromosomomes making 2 connected coppies called sister chromatids. Nuclear envelope The DNA determines the apperance of the organism. It also tells the cells within the organism how to function and organize themselfs. Outter Membrane Metaphase: The chromosomes are done lining up at the at the metaphase plate. At this point the 2 kinetochores from each chromosome attaches to microtubules from opposite poles. Nucleosomes are smaller sections of chromatins. Under a microscope they look like beads. They are composed of 8 histone proteins which form a histone octamer. The DNA double-helix than wraps around the histone octamer to form the bead like structures. They are typiclly 11 nm in diameter. The nuclear envelope is made of an inner and outter nuclear membrane. The inner membrane has proteins that lash to the lamina, which is a protein framework that gives the nucleus its structure. Chromatins are nucleosomes wrapped into a spiral called a solenoid. This structure is latter supported with more histone patricles. Chromatins are further condensed to form chromosomes. Chromatins are also inportant in cell division Nucleoplasm Chromosomes Nucleosomes The nuclear pores regulate the passage of macromelecules into and out of the nucleus, but gives free movement to particles like ATP. Cell Division Sources Telophase: Two nuclei reappear one for each cell. The chromosomes decondense and become more stringy. Nuclear Pores Cell Nucleus Chromatins DNA http://micro.magnet.fsu.edu/cells/nucleus/nucleus.html https://www.genome.gov/26524120 http://www.nature.com/scitable/definition/nucleosome-nucleosomes-30 http://www.nature.com/scitable/definition/chromatin-182 http://study.com/academy/lesson/nuclear-envelope-definition-function-structure.html https://www.khanacademy.org/science/biology/cellular-molecular-biology/mitosis/a/phases-of-mitosis The nucleoplasm mainly serves as a suspension substance for the organelles within the nucleous. It also helps to maintain the shape of the nucleus. It is mainly composed of water and a mixture of ions and molecules. The outter membrane is connected to the endoplsmic reticulum. The outer membrane is covered in ribosomes. Prophase: During this phase the nucleoulus disappears within the cell. The chromatins condense more tightly into chromosomes. The chromosomes start to line up. In the cytoplasm spindle fibers made of microtubules are formed. Appearance Anaphase: The sister chromatids are separated into opposite poles of the cell. Now each is considered its own chromosome. Microtubules not attached to chromosomes push appart making the cell bigger. All of this processes are powered by motor proteins. Most humans have 23 pairs of chromosomes, 46 in total. The chromosomes determine the characteriscs of the organism. They also contain information on cell division and organisation. The chromosomes contain about 6 feet of DNA. They are also important for the production of proteins and RNA. Appereance of chromosomes and Chromatins The nuclear envelope separates the contents of the nucleous from the rest of the cell. It is made if lipids like the cell membrane Inner Membrane 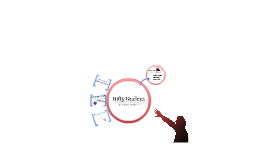 Transcript: Nifty Nucleus What is the Nucleus? The Nucleus is the most important part of the Cell. It is a membrane enclosed organelle found in Eukaryotic Cells. The Nucleus contains most of the Cell's genetic material know as 'DNA' (deoxiribonucleic acid). LOCATION The nucleus is usually found in the centre of animal cells, but in plant cells it may not be the same due to the presence of "vacuoles" which are spaces within the cytoplasm containing fluid THE FUNCTION The function of the nucleus is to maintain and protect the genes, and to also control the activities in the cell! Nucleus surroundings The nucleus consists of a nuclear membrane, nucleoplasm, nucleolus and and chromosones. The membrane is a double-layered structure that encloses the contents of the nucleus and the nucleolus is found inside the nucleus What is the Nucleus made of? The nucleus containing DNA is made of proteins surrounded by a membrane. - First organelle discovered - The nucleus has a double membrane - Not all Prokarayotic Cells contain a nucleus By: Priyanka Sharma 11B Interesting Facts www.buzzle.com http://www.cellsalive.com/cells/nucleus.htm Year 11 Biology book Bibliogrpahy http://en.wikipedia.org/wiki/Cell_nucleus Nature of Biology http://www.biology-questions-and-answers.com/cell-nucleus.html The nucleus is surrounded by cytoplasm which is made up of a jelly like substance called "cytosol." This is to protect the nucleus The nucleus in every cell varies in sizes. In animals the nucleus is the largest organelle in the cell, in diameter it is about 6 micrometers which takes up about 10% of the cell. 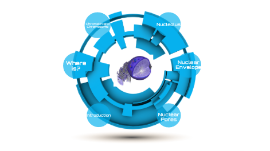