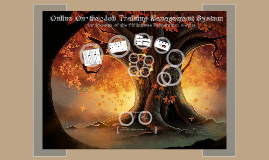 Transcript: The Autumn is.. 1. Capable to support the practicum coordinators and/or advisers in terms of monitoring/managing the OJTs. 2. Operates an easy and consistent way of communication between clients. 3. A tool that is efficient in terms of providing accurate OJT information. Recommendation The Developers Concluded the following: SDLC System Presentation Summary of On-the-Job Trainee (Students) Evaluation Summary of I.T. Experts’ Evaluation Fish Bone Diagram Online On-the-Job Training Management System Sharp Monitoring what is Autumn? Summary and Conclusion Empowering OJT Management The Developed Project is also known as "AUTUMN". Below are the recommendations or suggestions from different aspect of the developed system. 1. CITHM 2. Email notification per transaction. 3. OJT Grading System 4. Mobile Application 5. SMS notification 1995 Thank you! -Team Squalls VERY SATISFACTORY! System Architecture for Lyceum of the Philippines University - Cavite Summary of Practicum training site supervisors' Evaluation Theoretical Framework Yielding Training Initiatives Autumn is only intended ... to enhance the OJT procedure to support OJT and to empower OJT management why do we need Autumn? "Autumn's Eyes" 1. Security 2. Back-up recovery 3. Disadvantages of using Online Technology The Specific Objective of Online OJT Management System Evaluation Results Objective As the result of software evaluation, the respondents (Non IT Experts and IT Experts) stated that the developed system is recommendable in terms of enhancing the On-the-Job Training. Moreover, the respondents gave their assessments and reviews to further improve the functionality of the said system. Easy communication Project Overview Summary of Practicum Advisers' Evaluation Summary of Practicum coordinators' Evaluation 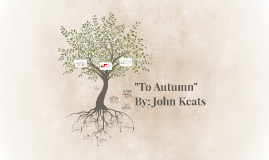 Transcript: Personification: "Season of mists and mellow fruitfulness, close bosom-friend of the maturing dun;" (lines 1-2) -This is personifying that the sun and autumn are old friends Simile: "And sometimes like a gleaner thou dost keep, Steady thy laden head across a brook; (lines 19-20) This is comparing Autumn to a gleaner, which is someone who collects any leftover food from a field after a harvest. Imagery: "To bend with apples the moss'd cottage-trees," this is explaining how the tree is filled with delicious apples First Stanza It starts off talking about how the sun and autumn are great friends discussing how they are going to make fruit and ripen crops before the harvest. This leads to seeds dropping which allows spring flowers to grow the whole process starts over again. He talks about how the bees think they will be able to buzz around the flowers all year but they know they can't. About John Keats Cont'd... Background of "To Autumn" About John Keats -Born in 1795 to lower-middle class in London -At 15, he entered a medical apprentice, & went into medical school -At 20 he abandoned medical school to devote all his time into poetry. First book of poems published in 1817. -Lost both parents young. Mom died from tuberculosis. This eventually killed him also. Figurative Language It's time the time after the harvest and autumn is hanging around where the harvested grains are kept. The hard work is done and now autumn can rest. What changes in life are most valuable & why? Theme Second Stanza "Keats’s Odes." SparkNotes. SparkNotes, n.d. Web. 07 Mar. 2017. To Autumn ▾." Enotes.com. Enotes.com, n.d. Web. 07 Mar. 2017. Shmoop Editorial Team. "To Autumn Summary." Shmoop. Shmoop University, 11 Nov. 2008. Web. 07 Mar. 2017. Work Cited Journal Third Stanza The author talks about how springs music is in the past but autumns music is good too. The music talks about harvested fields, nats flying around the river, clouds, birds whistling and crickets singing. All these things show a sign of beauty 3 stanza structure variable rhyme scheme Written in February of 1821 One of Keats simplest Odes Keats died nearly a year after he wrote "To Autumn" -Keats brother also died from TB and later moved to live with a friend in Hampstead -He set off for Italy in 1820, his health & fitness declined sharply. Hoped warm climate would restore his health, but he never returned back home - His death brought an end to one of the most extraordinary poetic careers in the 19th century of all time Transience which means everything will change "To Autumn is more towards serenity and acceptance How is it a Romantic? "To Autumn" By: John Keats -One of the main features is nature and the idea that as time progresses, nature does not just change but we also change in the lives that we live. -Keats uses the idea that nature is always changing. He describes the transition of Autumn to Winter, so this implies that Keats is conveying creativity -He uses imagery and the use of art through his poems to describe how seasons change. Ex: ‘the redbreast whistles from a garden-croft’ -The "redbreast" is a symbol on the seasons changing Summary 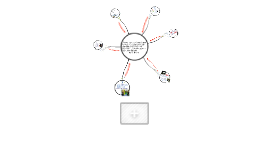 Transcript: moving forward without forgetting where we've been Kidmore End School is an inclusive learning community where everyone can realise their unique potential as an independent learner. as part of a community Are we nearly there yet? In our own way a journey with heart We are resourceful, responsible and respectful Everyone is valued and recognised as a child of God. We ask questions and learn from our mistakes about yourself to take risks to be independent What does this look like in our school? We share our gifts and contribute to the community Learning Outstanding is a big place What's the destination... and how do we know? Managing the journey, leading the vision and why are we on the road? A new commandment I give to you, that you love one another: just as I have loved you, you also are to love one another. John 13:34 Inclusive every child every adult Where are we now? Unique potential A time of change - local and national A time to revisit our core purpose as an outstanding school as a church school as a community school ever ^ an exciting and unique journey