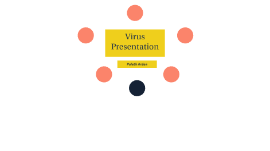 Transcript: Virus Presentation Poleth Ardon an infective agent that typically consists of a nucleic acid molecule in a protein coat, is too small to be seen by light microscopy, and is able to multiply only within the living cells of a host. What is a computer Virus ? Viruses Computer viruses usually spread in one of three ways: from removable media; from downloads off the Internet; and from e-mail attachments. Although the Internet gets a bad rap as a source of viruses, you're no more likely to contract a virus from the Web than you are from packaged software. How do viruses spread to computers? Viruses Spreads Ransomware is a form of malicious software (or malware) that, once it's taken over your computer, threatens you with harm, usually by denying you access to your data. The attacker demands a ransom from the victim, promising — not always truthfully — to restore access to the data upon payment. What is Ransomware? Ransomeware -Keep Java, Adobe Flash and Acrobat Reader updated at all times, or uninstall them if you do not use them! How can you avoid get infected by viruses? -Always be cautious with the programs you install or run. Always Keep your Windows OS Updated Use an effective antivirus and keep it updated at all times 1. Computer acting suspect? Do a little digging and check for symptoms. How can you clean an infected computer? 2. Use protection: Enter safe mode. 3. Back up your files. 5. Run the scan. What do you think are types of virus ? What are the types of viruses? 1. Browser Hijacker 2. File Infector 3. Macro Virus 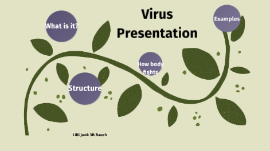 Transcript: Virus Presentation Lilli Junk 3B Rauch What is it? A virus is a small infection that multiplies/replicates inside the living cells of an organism. What is it? Link https://en.wikipedia.org/wiki/Virus Link Structure The structure of a virus includes DNA, head, and proteins Structure Link https://micro.magnet.fsu.edu/cells/virus.html Link How the body fights The Immune system in your body comes and fights/ attacks the virus with hopes to kill it off. Then if it were to return again, the memory cells come and kill the virus before you start to show symptoms of the virus. How to prevent: Wash your hands, avoid unnecessarily touching your eyes, nose, and mouth, and getting vaccines help reducing the risk of getting these fatal virus' How body fights Links https://www.vicks.com.au/en-au/science-of-healing/understanding-types-of-illness/how-your-body-fights-off-cold-and-flu Link Examples Some examples of virus include -Colds -Flu -Chicken pox -Measles -Polio -and Coronavirus (covid 19) Examples 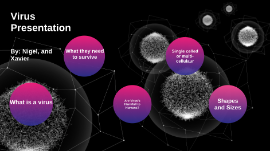 Transcript: Virus Presentation By: Nigel, and Xavier What is a virus Viruses are tiny organisms that give other organisims mild to severe illnesses in humans, animals, and plants. Virus's can give you the flu or a cold to something more severe like HIV or Ebola. What is a virus What they need to survive What do they need to survive Virus's survive by finding a host. They need to find a host because they cant reproduce on thair own like bactiria does. Virus's sneek themselves into the hosts cells and trick the cell into making more of the virus's gnetic code. From there the cell dies and the virus copies that were made inside the cell releases and the virus can spread to other cells infecting the host. However the reason the virus goes unnoticed inside the cell is because it is surrounded by protine, so the cell takes it in, not knowing what it just did. Example Example An animal, such as a chicken could get a virus. and when the chicken get cooked, and someone eats it, the virus gets into the persons body. Virus's can go unnoticed for weeks with only some flu like symptoms. so you wont go to the docter becuse you thinks its harmless. But that could kill you if not noticed early. the pictures to the right shows what virus's look like Viruses are not alive. Single-celled organisms have all the character- istics of living things. Viruses are not alive but affect living things. so viruses are single celled and not multicellular Single celled or multi-cellulaur Single celled or multi-cellulaur viruses don't have any of the parts you normally think of when you think of a cell. They have no nuculeus, mitochondria, or ribosomes. Some viruses do not even have cytoplasm. Nuculeus Nuculeus Eukaryotes include such microorganisms like fungi, protozoa, and algae. Viruses are considered neither prokaryotes or eukaryotes because they dont have the characteristics of living things, except the ability to replicate (which only happens in living cells). Eukaryotic vs Prokaryotic Eukaryotic vs Prokaryotic A virus structure can be one of the following: icosahedral, enveloped, complex or helical. These viruses appear spherical in shape, but a closer look actually reveals they are icosahedral. A helical virus is a virus that has a capsid shaped in a rod-shaped structure that has a central cavity that encloses the nucleic acid fo thevirus. An icosahedral virus is a virus consisting of identical subunits that make up equilateral triangles that are arranged in a symmetrical fashion. Shapes and Sizes Shapes and Sizes What makes a virus diffrent than other bactiria and cells is that a virus is not alive. they dont have a spacific perpose, exept thna keeping themselves, and other of the viruses alive, or doing thair job (since viruses arnt alive). what makes them diffrent? what makes them diffrent? Yes, viruses are harmful to humas depending on what type of virus it is. Ebola, zika and other deadly viruses can hurt and or kill humas because of the damage the virus does to the hosts body. Are Virus's Harmfull to Humans? Are Virus's Harmfull to Humans? https://docs.google.com/forms/d/e/1FAIpQLSf5kZYolRt33cGucr9q_SDpxPb56kzOfGyA4zRw7h1TQIUsMg/viewform Online quizz timez!!! Online quizz timez!!!