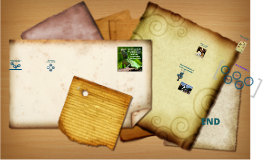 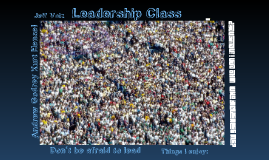 Transcript: Leadership Class Don't be afraid to lead Things I enjoy: Sports Football Baseball Basketball Cross Country Drums TV Family Beach Friends Relatives Sisters Crew Members Younger kids in Youth group Non Christian Friends Extended Family Who influences me? Kurt Hensel -Disclpeship group leader -Role model -Friend -Teacher -Showed me how to share my faith Jeff Volz -Father -Major role model -Friend -Showed me what it means to love your wife and how to be a Godly father Andrew Godrey -Family friend -Role Model -Encourager -Look up to him as a Godly man -Someone who challenges me to be a man of God in everything I do. And of course....... Mr. Axsom -Teacher -Godly Influence -Mentor group leader -Someone who challenges me to dig deeper into the Bible Music Who can I influence? Prezi By: Mark Volz 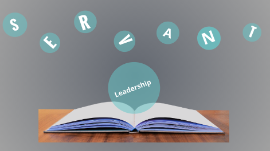 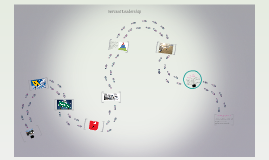 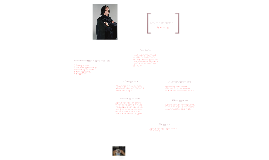 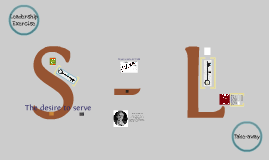 Transcript: Leadership Exercise The desire to serve ! Companies who have adopted the servant-leader philosophy: Southwest Airlines ServiceMaster Company Men's Wearhouse "Our people are our single greatest strength and most enduring longterm competitive advantage." Gary Kelly, CEO Southwest Airlines "You're going to like the way you look. I guarantee it." Take-away S - L Admitting mistakes Acknowledging when wrong Saying when you don't know Pushing decision making down Communicating well at all levels of the organization Being transparent Managing emotions Focus on meeting the needs of the organization and those it serves. Ensures organization can adapt and remain relevant to changing needs. Priority is meeting the needs of customers, colleagues, and the community. Listening - George Zimmer, Founder and Chairman - Peter Senge, Dir. Center for Org. Learning, MIT Sloan School of Managment Humble Behaviors Listening Greenleaf's view was one in which CEOs, staffs, and trustees all played significant roles in holding their institutions in trust for THE GREATER GOOD OF SOCIETY. Not for personal gain. Power vs Servant Model "It's amazing how much we get done around here when nobody cares who gets the credit." Humility "The leaders are not the only ones with good ideas, that's a lesson I learned early and quickly. If you want to lead, understand the talent you have available and free that talent. To do that, you have to ask for soldiers' opinions and ideas." Gen. Frederick M. Franks, Jr. US Army (ret.) "To develop the ability to listen, you have to do two things. First, hear. Second, quiet the mind." Unleashing the Energy & Intelligence of Others Being empathetic Using self-effacing humor Being honest Not being defensive Being open and approachable Being an effective listener Encouraging involvement Giving spontaneous and planned recognition Transformation Self-awareness "Make it right." Revolution Servant-leaders bring out the BEST in their colleagues by ENGAGING, INSPIRING, COACHING, and MENTORING. 1. Ask probing questions 2. Don't interrupt others when they are talking. Involves understanding lessons of the past, realities of the present, and the likely conseqence of a decision for the future. Foresight Stewardship Encourage everyone to actively seek opportunites to both serve and lead others. Conceptualization Robert Greenleaf (1904 - 1990) Essay: "The Servant as Leader" AT&T's Director of Managment Research (1926 - 1964) In 1964, he founded the Center for Applied Ethics, now known as The Greenleaf Center for Servant Leadership. The organization exists as much to provide meaningful work to the person as it exists to provide a product or service to the customer. Taking time to help those with less experience is invigorating to humble leaders. Be tough on problems, but gentle on people. Changing The Pyramid Driven by change agents - Peter Drucker (1909 - 2005), writer, professor, management consultant "Your first and foremost job as a leader is to take charge of your own energy, and then to orchestrate the energy of those around you." Sincerity Focused Listening Failure to ask a probing question (to the employee's benefit) Focus on having power Defines success in terms of who gains the most power, not in terms of who accomplishes the most for his/her organization. Promotes conflict between power groups. Rivalries with each other becomes the focus, hindering their ability to solve problems or seize opportunities. Developing your colleagues Empathy Servant-led Organizations Giving Persuasion Ethical use of power Persuasion in groups - Consensus-building Grabbing Building Community In community, there is commitment to the growth of all people, expanding human potential. Metamorphosis 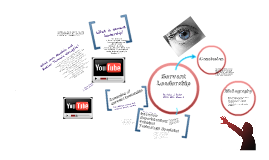 Transcript: Servant Leadership By Helen J. Rader EDD 801- Week 4 What is servant leadership? Greenleaf was the first person to use the term and he believed that a great leader is a servant first! Greenleaf (1970) It's not about you! It is better to give then to receive Vision and implementation Called not driven. Serving not self-serving. Focus on and take care of the customer Invest in the lives of your employees Develop the leaders around you Blanchard (2007) According to Ken Blanchard (2007) the acronym SERVE stands for: S stands for SEE the Future- Your vision will take people from one place to another E stands for Engage and Develop People- one to one, to team leadership, to organizational leadership R stands for Reinvent Continuously- enhance your knowledge and skills- keep learning! V stands for Value Results and Relationships- Take care of costomers and employees E stands for Embody the Values- Be trustworthy Examples of servant leadership Two historical leaders that embraced servant leadship What were Mandela and Mother Teresa's strengths? They modeled leadership by example: Humility- They lived in humility. They didn't think less of themselves they just think about themselves less. They put their ego down! Relationships- They had empathy, forgiveness, and appreciation for others. Forgiveness- They forgave those who had wronged them and others. Love- They love unconditionally and loved all..even their enemy. Leading is a matter of the heart. Blanchard (2007) Interview Superintendent Principal Technology Specialist Interview with Superintendent: Emphasis is on serving first. When leading, he/she sees the immediate needs and responds and then seeks to solve the larger problem. Focuses on individuals and helping others and responds to God’s calling and finds out who they should be. The focus is self sacrifice (servant) and insight (discernment) as a leader. Serves others and not oneself. Our greatest role model is Jesus who washed the feet of the disciples before responding as a leader to the world's needs. Involves a great sense of care, burden bearing, and working with others to serve. Interview with a Principal- Don’t ask anyone to do anything that you wouldn’t be willing to do yourself. That models what you want everyone else to do, serve one another. Putting relationships first. Be available and accessible at all times. Put others before yourself because your focus should be the success of the students. Interview with technology specialist- she believes that leaders are in a position to formulate the vision and oversea all of the aspects of the organization. A servant leader is constantly full of empathy for their constituents. They have to consider all of their constituents and how their actions and decisions are impacting them. They have to be sure constituents buy into the values and are getting their opinions heard. It is more relational. They probably have to put those people in the place to be agents of change. Always focus on constituents. Conclusion "People rarely give their best efforts and fullest cooperation simply because they were ordered to do so. They accept directions when they perceive that people in authority as credible, competent, and sensible." Bolmen & Deal (2003, p.122) Bibliography Blanchard, K. (2007). Leading at a Higher Level. New York: Prentice Hall. Bolman, L., Deal, T. (2003) Reframing Organizations (3rd ed.) San Francisco: Jossey-Bass, Greenleaf, R. (1977). Servant leadership, Paulist Press. What influenced their decisions? 1. Mother Teresa 2. Nelson Mandela (cc) image by quoimedia on Flickr 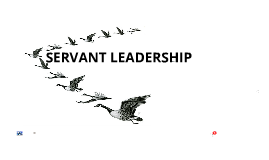 Transcript: Listening Empathy Healing Awareness Persuasion Conceptualization Foresight Stewardship Commitment to the growth of people Building community Greenleaf developed Servant-Leadership because he saw a need to put serving others as the number one priority. Should this actually be the number one priority? Why/why not? What are some examples of servant leaders? "Argued that the values of servant-leadership perpetuate "a theology of leadership that uphold androcentric patriarchal norms" and "insidiously perpetuates a long-standing masculine-feminine, master-slave political economy." Eicher-Catt (2005) Lacking empiricial support Has only anecdotal evidence Considered to be "in its infancy" Social criticisms Today's individual-success focus vs. the collectivism of servant-leadership USAFA Questions! Characteristics of the Servant-Leader Practicing Servant-Leadership, by Spears: http://www.spearscenter.org/docs2010/PracticingServantLeadership.pdf Servant Leadership, the Leadership Theory of Robert K. Greenleaf, by Smith: http://www.carolsmith.us/downloads/640greenleaf.pdf SERVANT LEADERSHIP! SERVANT LEADERSHIP Leader motivation (organizational goals vs. self-actualization of followers) Organizational objectives Measures of success Where does Servant Leadership fit on the FRLM???? Do you see servant leadership at the Academy? Through cadet leadership, permanent party, DF, AD, etc? How can cadets be a servant leader in their squadrons? Is servant leadership simply a tool, or can it be a lifelong practice? Aka, is this an exceptional type of leadership, or do you see it day-to-day? What types of qualities would servant leadership promote in the followers? Resources: Support: "...The great leader is seen as servant first..." Robert K. Greenleaf How is servant-leadership different from transformational leadership? Criticisms: Addresses human weaknesses and attempts to fix them Avoids power traps (a sense of equality for everybody) Wholistic approach to leadership Alternative to hierarchical paradigms ...and vaguely relatable to servant leadership...