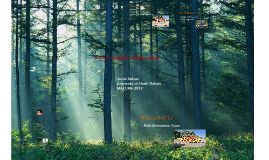 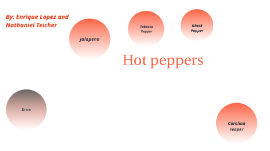 Transcript: Hot peppers By: Enrique Lopez and Nathaniel Teicher Have you ever had any hot peppers in you life ? Most likely you have not had some on the list . Here's a hint , one of the peppers on this list is one that they serve at school ? Intro Intro Jalapeno The jalapeno originates from Xalapa on the coast of Mexico. It is 5,000 Scoville hot units. That determines how hot the pepper is . Although the jalapeno comes from Xalapa, Mexico it ships to almost every part of the world like the United states of America . The is the pepper that they serve on nacho day at our school. j`alapeno pictures Picture of the jalapeno Carolina reaper The Carolina reaper is one of the hottest peppers in the world . It comes from Rock Hill , South Carolina and it is so specie that it could posibly kill a teen age human . It is the hottest pepper in America . It is also 1,569,300 scoville hot units .The carolina reaper is also in the one chip challange , there is carolina reaper shaving on this hot toritia chip called paqui or the one chip challenge. Carolina reaper picture Picture The Tabasco pepper is a chil pepper. The tabasco pepper comes from Avery Island Louisiana. The Tabsaco pepper has 30,000 to 50,000 scovill heat. The tabasco pepper starts out green and when gets ripe it turns orange then red. Tabasco Pepper Tabasco Pepper Tabasco Pepper pictures Tabsasco Pepper photos Ghost Pepper The Ghost pepper originates from India. The ghost pepper is 400 times hotter than Tabasco hot sauce. The Ghost pepper has 1 million Scoville heat. You can also die from eating the Ghost pepper. Also if you smell it you could go nose blind and if you touch your eye after touching the pepper you can go blind. After eating a Ghost pepper you should drink milk, drink alcohol, ( kids do not do that ) take a teaspoon of sugar, eat chocolate, and chew on a slice of bread. Ghost pepper Ghost pepper pictures Photos of the Ghost pepper 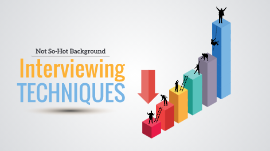 Transcript: TECHNIQUES Not So-Hot Background Interviewing Red Flags Steps to take before the interview 01 Identify Your Personal Red Flags Drug/Alcohol Learning Disorder Abusive History Violent Behavior Lack of Honesty and Integrity Bankrup/Debt Family Issues Knock-Out Objections Lower the Red Flag 02 Explain the Situation Understand the Employers Side No Excuses Take Responsiblity Explain Why it WON'T Happen Again Think of something Get Rid of Red Flags 03 Explain what has changed and what you learned from your experience If employer seems hesitant- Bring it up Be Honest Dealing with Questions Think of Something 04 Give information asked NO MORE Maintain good eye contact Talk briefly, about what you have learned from the mistake Talk about positive behaviors put in place Positive and concise Refrain from beginning or ending an interview with background issues Common Mistakes Whatever it takes 05 Late Waiting Excuses Appearance Attitude Behavior Incoherent/Unfocused Inarticulate Lack Enthusiasm Lack Confidnece Talk TOO Much No ?'s Negative Poor Listening Short Answers Unprepared Skills to do the job Dependable Fit into the Organization Follow Instructions Willing to Listen Willing to Learn Trust and honesty Long-term Employment What Employers Want From You Conclusion You made it! 06 Need to be ready with honest positive answers that will promote your candidacy Provide observable/measurable examples Preparation will give you a huge advantage over others 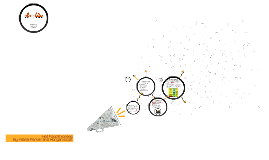 Transcript: Safety and Sanitation Production Budget Owner and Operator: Chef Zee Baloch Asim Baloch: Financial Operator, FOH Manager, Hiring and Scheduling Manager. Daad: Daytime Kitchen Manager Antonio: Evening Kitchen manager Mrs. Pam: Sous Chef and BOH Manager. 5 Kitchen Workers and 6 Cashiers Conversation with the Owner Currently the restaurant has an Instagram, Facebook and Snapchat to keep customers engaged. The restaurant has no specific customer type. They see a large amount of people for lunch. They also have contracts with Waitr and 237 Menu.com Kitchen Staff required to wear clean and proper uniform. Hair restrained at all times Hands washed and dried the use of gloves Closed toe non skid shoes Chef Coat provided by Chef Zee Bottoms of choice. Safety and Sanitation Production Hot Food Express By: Alana Parker and Morgan Scott Menu and Marketing Labor and Service Front of the House Staff required to Must wash hands before returning to work Clean work uniform required Uniform is a black top and any bottoms Closed toe shoe recommended but not required What were your main start-up problems? What problems did you have after a year in business? In the beginning it was making sure people knew we existed. Problems have to have been the location. I was lucky enough be successful and be able to move. If you knew then what you know now, what would you have done differently? Not a thing. I believe I was quite lucky with my start up process. Including employee selections. Majority of my cooks have been with me from the very beginning . What kind of markup/margins/gross profit should I expect during my start up year? Could not give me exact numbers. Just said, "be prepared to spend more thank you will see." What kind of computer and POS equipment do you use? Why? HFE uses the Aloho System Are there any special problems in the restaurant business I should look out for? Growing Trends. He says keeping up with the "new" thing. People change what they want to see in a business daily. Such as gluten free lifestyles and healthier choices. You have to be prepared to adapt. What do you like best about being in the business? "The people." I love my line of work. Being able to mix food and music and make others happy is the best treat. How did you get started in the business? It started a long time ago watching my mother cook. But my love for fusion cusine came form a vietnamese woman, I would do dishes for her while i was in college. She would return by giving me free food. Soon after she taught me her secrets. I added my own touches and flare to create my menu items. How would you describe your management style? Pretty relaxed I feel. I like to teach. If you respect your employee they will respect you and your vision. "Asim did not want to give all of the financial information so he ball parked numbers." Labor: managers salaries about 10% Food and Beverage: Ranges between 30-33% Facility: Ranges between 7-10% (routine maintenance) Catering: there is currently no catering budget in place. although they do cater. FOH cont' BOH Currently there is no training policy in place. The oldest employee trains all of the new employees. FOH 3013 Cameron Street Lafayette, La 70506 337-235-7874 Layout and Design