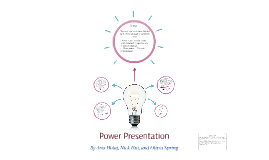 Transcript: Example 1: Example 2: Arta pushes a ball 5 meters in one second across a flat ground with 200 Newtons of force. The ground is a frictionless surface. What is the power of the ball? Work: "Power is the work done divided by the time elapsed" (Eisenkraft, 411). By Arta Holaj, Nick Hui, and Olivia Spring Nick is rock climbing vertically 5 meters. This takes him 30 minutes. At home, Olivia is changing a lightbulb. She climbs up a 5 meter latter to do so. This takes her 3 minutes (Henderson). Who generates more power? Power Presentation Work is "the change caused by a force applied to an object over some amount of distance" (Hewitt). Units are in Joules (J) (Henderson). Equations: Power is measured in watts (W). One watt is equal to one Joule per second. 1 Horsepower = 750 watts (Henderson) (Henderson) Works Cited: Power: Eisenkraft, A. (2010). Work and Power: Getting to the Top. Active Physics: A Project Based Inquiry Approach, Physics For All ( 3rd Edition) (3 ed., ). New York, NY: Its About Time . Henderson, Tom. (1996). Work, Energy, and Power. The Physics Classroom. Retrieved from http://www.physicsclassroom.com/class/energy/Lesson-1/Power Hewitt, Paul G. (1999). Conceptual Physics. Menlo Park, California: Scott Foresman Addison Wesley. 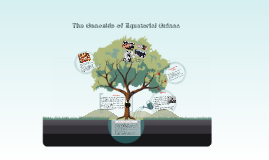 Transcript: Background of Francisco Nguema -Equatorial Guinea falls into disarray as Nguema spends government funds on personal things -Nguema decides to execute all people of the Bubi tribe -He uses soldiers to slaughter entire families and villages -Nguema also targets "intelligent" people (those who wear glasses/attend schools) -By the end of Nguema's tyranny, 1/3 of the population has either been killed or exiled -Nguema is overthrown by his nephew and executed for murder, treason, and genocide Lasting Effects on Citizens and Country -Bubi people are the minority -Bubi people still are descriminated against -Still prosecuted more than other tribes/clans in Equatorial Guinea -All citizens have hardly any rights -EG is very poor because of all the money Nguema wasted -Nguema starts off regime by taking all power from legislative and judicial branches of government and controlling everything directly -Names himself "President for Life" and becomes a dictator Beginning Similarities to The Crucible Estimated 50k deaths The Tyranny The Genocide of Equatorial Guinea -In both The Crucible and EG innocent people were killed -In EG, the "President" ordered his soldiers to kill, in The Crucible, the church leader had his henchmen do the killing -Both situations caused fear and strife -Francisco Macias Nguema born 1968 -Orphaned at 9 after witnessing father beaten to death and his mother committing suicide soon after -Nguema and siblings become "laborers" or low-class workers without parents -Nguema survives and takes the Civil Service test, failing thrice before passing -Becomes mayor of small town -Grows from mayor to member of parliament, then runs for president in only free election to date and wins 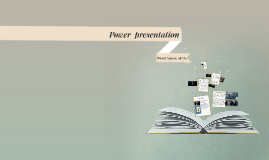 Transcript: Wendy Nguyen, 9ENG1 Power the ability or capacity to do something or act in a particular way. Power is highlighted in Tomorrow When the War began and Lord of the Flies. Power is conveyed through brute force, the evolution of characters and fear. Lord of the Flies Power through brute force Power through evolution of characters Tomorrow When the War Began The slow motion effect when Robyn shoots at the soldiers shows that she has broken away from her values and religious beliefs of not harming people. She chose to save her friends by killing strangers, something that had refused to do up until that very moment. At the end of the movie, a long shot is used when the group of teenagers are all lined up. It gradually pans out so you focus on the characters and realize that they are now proper soldiers with their dark costumes. The clothing of the characters at the end are now dark, just their expressions. This shows that they are no longer the cheerful and chirpy characters at the start but are now a dangerous force that should not be reckoned with. Ralph is the athletic and charismatic leader in Lord of the Flies. Ralph is the character that represents order, civilization and productive leadership. While most of the boys think about playing on the isolated island, Ralph is one of the few that actually think about building huts and ways of being rescued. Later on as the rest of the group gradually succumbs to savage instincts and this causes Ralph’s power to decline and Jack’s to rise. Jack’s character is based around the instinct of savagery, violence and desire for power. At the start you are able to see that Jack is furious about losing the leadership role to Ralph. He instantly feels that he needs to be the one in charge as he was the head of the choir boys at school. The first time Jack encounters a pig, he is unable to kill it. This leads to Jack becoming obsessed with hunting and gradually builds him into a barbarian like person. The more savage Jack becomes, the more he is able to control the rest of his group with blood lust. Lord of the Flies Power through fear The bright yellow lighting on Kevin’s face makes us easier to see how afraid Kevin is. This causes him to leave Corrie and Ellie alone. Power is given to the invading forces in this case as they are the ones that are responsible for the fear. “I suppose when the time comes I’ll do what I have to do. What worries me though is that I can’t guarantee that I won’t pack up under pressure. I’m so scared and I think that I might stand there and scream”. This is stated by Fi who understands that even though she is willing to fight, she is still afraid of what would happen. Her tone of voice is very soft and starts to break, telling us that she is afraid of dying but is still willing to fight. This gives her a slight power as it persuades the group the fight, including Kevin. Power presentation In conclusion, Tomorrow When the War Began and Lord of the Flies both present insight into power. This is shown through brute force, evolution of characters and fear. To sum up, a display of power is evident through these ways in Tomorrow When the War Began and Lord of the Flies. Tomorrow When the War Began “Ralph’s right of course. There isn’t a snake-thing. But if there was a snake we’d hunt it and kill it. We’re going to hunt pigs to get meat for everybody. And we’ll look for the snake too-“. This is stated by Jack who uses persuasion to make sure the boys aren’t afraid. This “beast” figure eventually becomes reason for Jack’s power as he promises the children that he will hunt down the beast and kill it, giving the boys a false sense of protection. Conclusion Texts chosen Tomorrow When the War Began shows power through brute force through the use of props and fast editing cuts. The gun is used to shoot an angry civilian, to show authority and make sure that their power is displayed. Fast editing cuts are used to create a sense of panic while Ellie, Corrie and Kevin are being shot at. Lord of the Flies displays power through brute force through the use of imagery. “Ralph twisted sideways on top of a writhing body and felt hot breath on his cheek. He began to pound the mouth below him, using his clenched fist as a hammer, he hit more and more passionate as the face became slippery.” This lets us create a scene where Ralph is beating up the person below him to the point where their face is slippery with blood. "The point tore the skin and flesh over Ralph’s ribs, then sheared off and fell in the water”. Imagery has been used to let us see that in the fight, the other individual has the upper hand on Ralph.