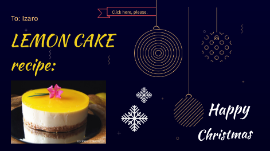 Transcript: To: Izaro Christmas LEMON CAKE recipe: Happy Click here, please. 250 grams of cookies 125 grams of butter 250 grams of sugar 300 grams of cream cheese 200 ml of liquid cream 250 ml of water Grated skin of two lemons Lemon juice A packet of lemon jelly Ingredients: First, we will prepare the BASE OF CAKE Crush the cookis Once we have crushed, put them in the glass of the bender Put the butter in the same glass of the bender. Mix them until we get a past dense and homogeneous texture Cover the base of the mold Crushing it well to compact it Put in the fridge PREPARATION After we prepare THE CREAM Boil a saucepan with the indicated water. When it boils, add the lemon jelly Stir, and when it's ready, remove it. Until to form a homogeneous creem with; cream, sugar, cream cheese, juice and lemon zest and gelatin. And to end with the LEMON CAKE Take out the mold from the fridge If the base is already hardened, throw over the cream that have baten before Distribute it throughout the mold Let it cool in the refrigeratoruntil the next day SHARE THE LIMON CAKE WITH YOUR FAMILY AND YOUR FRIENDS!! TO FINISH: 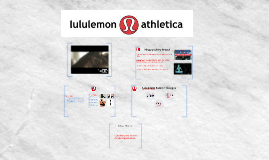 Transcript: Jacquard Natural Blends Ethical Concerns Luxtreme Fabric is sweat-wicking and four-way stretch and fits like a second skin to give support and coverage with a cool, smooth feel. Founded by Chip Wilson in Vancouver, Canada in 1998. Lululemon is a yoga-inspired, technical athletic apparel company for women and men. Designs at first were made for women Great feedback persuaded them to expand Cotton fleece blended with polyester VITASEA: Made with seacell Seaweed blended with cotton and spandex Quality-control issues Marketing disasters Price Points Target Market Lululemon Fabric + Designs This smooth fabric offers support and technical performance when we are sweating our hardest. knitting dyed nylon yarn maximizes softness These breathable fabrics are blended with natural fibres and yarns for extra softness. sophisticated and educated woman and men who understands the importance of an active, healthy lifestyle They are tasked with the dual responsibilities of career and family constantly challenged to balance work, life, and health A practice of knitting dyed nylon yarn to create beautiful textured patterns that move along with you. Yoga Pants Ranges from: $72-$128 Sweatshirt & Jackets Ranges from: $108-$198 Tops Ranges from: $48-$108 Accessories Ranges from: $12-$118 History of the Brand