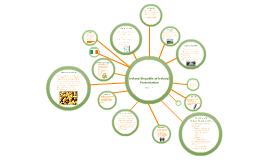 Transcript: Ireland's religions and their percentages: Roman Catholic 87.4% Church of Ireland 2.9% Other Christian 1.9% Other 2.1% None 4.2% Unspecified 1.5% Ireland's holidays/religious events are: Christian holidays Seasonal holidays The Great Potato Famine CIA World Factbook [For facts and pictures.] "Ireland." CultureGrams Online Edition. ProQuest, 2013. Web. 2 Jun 2013. [CultureGrams] Cfact.org [Potato picture.] http://www.eurocoins.co.uk/ireland.html [Irish Euro picture.] The official currency of Ireland is the Euro, since it is in the European Union. GDP per capita: 41700 U.S. Dollars GDP: 191.5 Billion U.S. Dollars Population Geography and Climate The chief exports in Ireland are: Machinery, equipment, chemicals, pharmaceuticals, animal products, and food products. Currency and Economy Sources Form of Government Ireland [Republic of Ireland] Presentation Language [Six more paths to go.] The population in Ireland in July 2013 is estimated to be 4,775,982 people. The population density [27,133 sq. miles divided by 4,775,982,] is approximately 176 people per sq. mile. In Ireland, there is a 99% literacy rate. Also in Ireland, there is an average of 18 years of school attendance. The form of government in Ireland is a republic, or a parliamentary democracy. Religions and Holidays/Religious Events Capital and Major Cities Ireland's Flag Size of Ireland Culture and Food The capital of Ireland is Dublin, which is 53.20 degrees North latitude, and 8 degrees West longitude. The major cities in Ireland are Cork, Limerick, and Galway. Education Sé cosáin níos mó chun dul. The only country that neighbors Ireland is the United Kingdom, as Northern Ireland, which is part of the United Kingdom, is on the same island as Ireland. Neighboring Country Chief Exports Ireland's geography includes plains, rugged hills, and low mountains. Ireland's climate includes humid and overcast weather, mild winters, cool summers, or in quicker words, a temperate maritime climate. Lowest point: Atlantic Ocean 0 m.. Highest point: Carrauntoohil 1041 m.. The great potato famine in Ireland happened in the 1840's, and more than 2,000,000 people died over the five years of the famine. The famine made tensions and a want for independence from the United Kingdom, and then the Anglo-Irish Treaty was signed, letting Ireland become an British dominion, later to become an independent country. By Colin H. The area of Ireland is 27133 square miles. In relative size, or just looking at it, it is a small country. The official languages of Ireland are Irish [Gaelic or Gaeilge], and English. In Ireland, some of the people there like to play music and play sports. Also in Ireland, people like to cook and eat European foods, simple foods, and hearty foods. 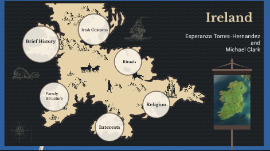 Transcript: Esperanza Torres-Hernandez and Michael Clark Ireland 1921: Ireland gained independence from the United Kingdom Became the Republic of Ireland, but Northern Ireland remained legally and culturally binded to the United Kingdom English and Celtic roots are embedded within Irish culture and religion since they ruled over Ireland centuries ago Brief History Brief History Northern Ireland vs The Republic of Ireland Northern Ireland vs The Republic of Ireland Family Structure Due to the conversion of Chrisianity during the 5th century, Catholic churches largely influenced nuclear family structures and gender roles, as well as stressed the importance of having children Ireland is now more accepting of diverse familes and is becoming less influenced by the church. An example of this was when Ireland legalized same-sex marriage in 2015 The Irish are also more accepting of blended familes or childless families Women play a large role in initating and passing family based laws Family Structure Re-ignited after the Great Famine Irish Renaissance consists of increased peices of literature, music, and theatre Irish is the first language that is to be taught, then English. Scottish Gaelic used to be spoken more but the Irish aim to keep their identity alive by speaking/learning Irish Certain parts of anciet Celtic religion were kept during the conversion of Christianity Irish Customs Irish Customs Folk Music Traditional, Folk music instruments include the Irish Harp, the fiddle, and accordion. Modern Irish bands, such as The Cranberries, have incorporated traces of traditional Irish music within their own. Folk Music Pubs Popular place to socialize Musicians played live music People would sing with each other while enjoying drinks Popularity of pubs declined after laws on drinking age were passed Pubs Oscar Wilde (right) and George Benard Shaw (left) are just two examples of Irish writers who have achieved Nobel Prizes Nobel Prize Winners Nobel Prize Winners Samhain is a Gaelic festival marking the end of the harvest season and the beginning of winter or the "darker half" of the year. Traditionally, it is celebrated from 31 October to 1 November, as the Celtic day began and ended at sunset. This holiday is most commonly celebrated across the globe as halloween. Samhain Rituals St. Patricks Day St. Patricks Day -Saint Patrick's Day, or the Feast of Saint Patrick, is a cultural and religious celebration held on 17 March, the traditional death date of Saint Patrick, the foremost patron saint of Ireland. This "religious" holiday is celebrated around the world by drinking way too much green beer. - Saint Patrick's day is usually rung in with tradition Irish music and the visual flaunting of Green and shamrock themed clothing. - The traditionally worn green clothing is symbolic of the catholic church in old Ireland. -It was said that St. Patrick used the 3 leaf green clover to explain catholicism to the Pagan Irish. -UFC champion Connor McGregor has brought Ireland back onto the world's playing field in regards to Sports. Interests Interests -Guinness has remained a world leader in distlling Beer. SInce 1759, Guinness has set the standard High and nearly gone unmatched in quality. The most commonly practiced religion in the Republic of Ireland is Christianity, with the largest church being the Roman Catholic Church. The Irish constitution says that the state may not endorse any particular religion and guarantees freedom of religion. The christian Protestants make up a large portion of the Irish population as well, mostly to the North. Religion Religion