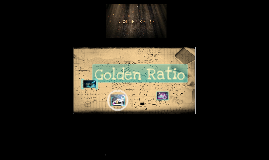 Transcript: Golden Ratio 1.61803399 History Some of the greatest mathematical minds of all ages, from Pythagoras and Euclid in ancient Greece, through the medieval Italian mathematician Leonardo of Pisa and the Renaissance astronomer Johannes Kepler, to present-day scientific figures such as Oxford physicist Roger Penrose, have spent endless hours over this simple ratio and its properties. But the fascination with the Golden Ratio is not confined just to mathematicians 427-347 BC PLATO 325-265 BC EUCLID 1176-1250 Fibonacci 1445-1517 Pacioli 1571-1630 Kepler 1931 Penrose Mathematics Involved.... ALGEBRAIC Two Quantities are said to be in golden ratio if...... (a+b)/a = a/b= The conjugate root of the previous equation gives us the value of INVERSE GOLDEN RATIO i.e. The number φ turns up frequently in geometry, particularly in figures with pentagonal symmetry. The length of a regular pentagon's diagonal is φ times its side. The vertices of a regular icosahedron are those of three mutually orthogonal golden rectangles. Triangle whose sides form a geometric progression KEPLER's TRIANGLE The Fibonacci sequence is: 0, 1, 1, 2, 3, 5, 8, 13, 21, 34, 55, 89, 144, 233, 377, 610, 987, ..... The closed-form expression for the Fibonacci sequence involves the golden ratio: The golden ratio is the limit of the ratios of successive terms of the Fibonacci sequence, as originally shown by Kepler: Aesthetics De Divina Proportione, a three-volume work by Luca Pacioli. He also saw Catholic religious significance in the ratio, which led to his work's title. Containing illustrations of regular solids by Leonardo Da Vinci, Pacioli's longtime friend and collaborator, De Divina Proportione was a major influence on generations of artists and architects alike. Architecture The Parthenon's facade as well as elements of its facade and elsewhere are said by some to be circumscribed by golden rectangles. MAKING GOLDEN RECTANGLE AS PER EUCLID'S ELEMENTA A geometrical analysis of the Great Mosque of Kairouan reveals a consistent application of the golden ratio throughout the design, according to Boussora and Mazouz Art PAINTING Leonardo da Vinci's illustrations of polyhedra in De divina proportione and his views that some bodily proportions exhibit the golden ratio have led some scholars to speculate that he incorporated the golden ratio in his paintings. But the suggestion that his Mona Lisa, for example, employs golden ratio proportions, is not supported by anything in Leonardo's own writings MUSIC James Tenney reconceived his piece For Ann, which consists of up to twelve computer-generated upwardly glissandoing tones, as having each tone start so it is the golden ratio (in between an equal tempered minor and major sixth) below the previous tone, so that the combination tones produced by all consecutive tones are a lower or higher pitch already, or soon to be, produced. NATURE In 2003, Volkmar Weiss and Harald Weiss analyzed psychometric data and theoretical considerations and concluded that the golden ratio underlies the clock cycle of brain waves G OM TRY -1 < r < 2 Odom's construction The 16th-century philosopher Heinrich Agrippa drew a man over a pentagram inside a circle, implying a relationship to the golden ratio. The golden triangle can be characterized as an isosceles triangle ABC with the property that bisecting the angle C produces a new triangle CXB which is a similar triangle to the original. r GOLDEN SPIRAL 2 THANK Continued Fraction ACROPOLIS OF ATHENS Great Mosque of Kairouan 1.6180339557...... 2 Golden relationship with Fibonacci sequence Ptolemy 427-347 interesting mathematical facts..... YOU (1+√5) Therefore, if a Fibonacci number is divided by its immediate predecessor in the sequence, the quotient approximates φ; e.g., 987/610 ≈ 1.6180327868852. These approximations are alternately lower and higher than φ, and converge on φ as the Fibonacci numbers increase Theorem dividing line segment by golden ratio Adolf Zeising, whose main interests were mathematics and philosophy, found the golden ratio expressed in the arrangement of branches along the stems of plants and of veins in leaves. In these phenomena he saw the golden ratio operating as a universal law. If the side lengths of a triangle form a geometric progression and are in the ratio 1 : r : r2, where r is the common ratio, then r must lie in the range φ −1 < r < φ , which is a consequence of the triangle inequality Applications & A pyramid in which the apothem (slant height along the bisector of a face) is equal to φ times the semi-base (half the base width) is sometimes called a golden pyramid 2 Approximate and true golden spirals. The green spiral is made from quarter-circles tangent to the interior of each square, while the red spiral is a Golden Spiral, a special type of logarithmic spiral. Overlapping portions appear yellow. The length of the side of one square divided by that of the next smaller square is the golden ratio. Fibonacci and phi are used in the design of 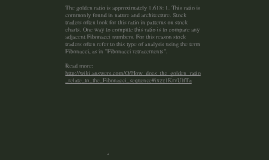 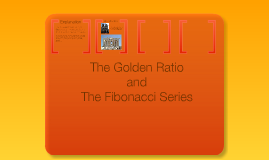 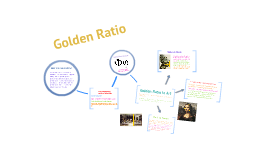 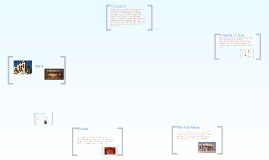 Transcript: The golden ratio is found in ancient as well as modern art and architecture. But what fascinates me is how humans see so much alike. We all seem to recognize what looks good as a rectangle or triangle and what appeals to each other. Even though we're from different races, backgrounds, and time periods we all have a feel for what looks good. As a rectangle or triangle and that's the golden ratio. The Parthenon The Pyramids of Giza also have some history with the golden ratio. The biggest is sometimes called the Great Golden Pyramid. Because in the inside of the pyramid is a triangle taking the dimensions of the golden ratio. Conclusion Pyramids of Giza Phidias Leonardo Da Vinci Lenardo Da Vinci was one of the most popular users of the golden ratio in his art. All of his famous paintings including his two most famous. The Last Supper and The Mona Lisa both used the golden ratio in them. The Golden Ratio in Art and Architecture The Parthenon which stands in Athens Greece is a temple dedicated to the Greek god Athena. It is thought to be the best mathematical approach to architecture. Phidias was the first artist to really experiment with the golden ratio. He used it so much that later the numerical value of the golden ratio was name phi after him. 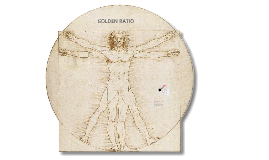 Transcript: an irrational number that appears in many places and proportions involved in everyday life can be derived by many methods, one of which involves the Fibonacci Sequence a sequence obtained by adding the two preceding terms to obtain the next term (0, 1, 1, 2, 3, 5, 8, 13, 21...) when you take a number from the Fibonacci Sequence and divide it by the preceding term, you will obtain a number that approaches, but doesn't pass Phi as the chosen number increases Phi FIBONACCI SEQUENCE GOLDEN RATIO How does this relate to the Golden Ratio? value = 1.6180339887.... 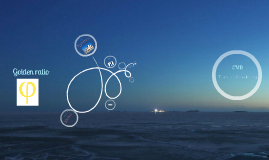 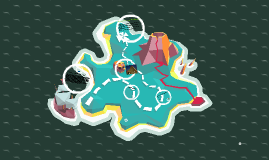 Transcript: Statue of Athena At least since the 20th century, many artists and architects have proportioned their works to approximate the golden ratio—especially in the form of the golden rectangle, in which the ratio of the longer side to the shorter is the golden ratio—believing this proportion to be aesthetically pleasing. A golden rectangle can be cut into a square and a smaller rectangle with the same aspect ratio. Mathematicians since Euclid have studied the golden ratio because of its unique and interesting properties. The golden ratio is also used in the analysis of financial markets, in strategies such as Fibonacci retracement. The golden ratio is often called the golden section or golden mean. Other names include extreme and mean ratio, medial section, divine proportion, divine section, golden proportion, golden cut, golden number, and mean of Phidias. Golden ratio in the Great Pyramid Golden rectangle in The Mona Lisa The golden triangle is used to form a logarithmic spiral. By bisecting the base angles, a new point is created that in turn, makes another golden triangle. The bisection process can be continued infinitely, creating an infinite number of golden triangles. A logarithmic spiral can be drawn through the vertices. This spiral is also known as an equiangular spiral, a term coined by Rene Descartes. "If a straight line is drawn from the pole to any point on the curve, it cuts the curve at precisely the same angle," hence equiangular. The Golden Spiral he Golden Spiral above is created by making adjacent squares of Fibonacci dimensions and is based on the pattern of squares that can be constructed with the golden rectangle. If you take one point, and then a second point one-quarter of a turn away from it, the second point is Phi times farther from the center than the first point. The spiral increases by a factor of Phi. the Athenas statue has a golden rectangle around her face and her over crossing each other is makes another golden rectangle shown before. Mona Lisa's face is a perfect golden rectangle, according to the ratio of the width of her forehead compared to the length from the top of her head to her chin The dimensions of the Great Pyramid are highly suggestive of the golden proportion. The base of the pyramid measures 755.8 cubits, half that being 377.9 cubits. When divided by the length of one of its inclined sides, which are 612 cubits, the result is 1.619, nearly the same as the divine ratio. The masterpiece "Last Supper," contains a golden ratio in several places, appearing in both the ceiling and the position where the people sit. distinctive feature of this shape is that when a square section is removed, the remainder is another golden rectangle; that is, with the same aspect ratio as the first. Square removal can be repeated infinitely, in which case corresponding corners of the squares form an infinite sequence of points on the golden spiral, the unique logarithmic spiral with this property. According to astrophysicist and math popularizer Mario Livio, since the publication of Luca Pacioli's Divina Proportione in 1509,[1] when "with Pacioli's book, the Golden Ratio started to become available to artists in theoretical treatises that were not overly mathematical, that they could actually use," many artists and architects have been fascinated by the presumption that the golden rectangle is considered aesthetically pleasing. The proportions of the golden rectangle have been observed in works predating Pacioli's publication. The Golden Triangle The golden Rectangle What is the Golden Ratio? The great Pyramid and the Golden Ratio i think that the Egyptians did know about the golden ratio when the were building the pyramid because like said in history they tried to make the prefect building with passion because you cant make something that perfect they would need lots of passion to build something like that and i think that the pharaoh knew about this and told they citizens on how to make it like like this and they followed orders and since it took them 26 years i im quit sure that they did it s perfect as possible Reflection The Last Supper