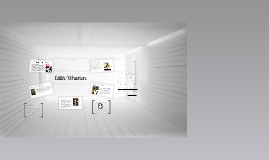 Transcript: Wharton's main theme in her writing was the conflict between society and one's individual self. The climax of the story usually came near the end, creating a long anticipated build up and a quick finish. Birth of Writing Career She began publishing a volume of short stories at around this time title The Touchstone. The novels, The Valley of Decision and Sanctuary were published in 1902 and 1903. Her next novel was also a well-known novel called The House of Mirth which was published in 1905 In 1907, Wharton moved permanently back to France and divorced her husband in 1912 because of his mental problems. Ethan Frome, which is well-known as her best work, was published in 1911. Quick Facts Edith Wharton War-Time Stories By Ife Babatunde Putilzer Prize for The Age of Innocence Putilzer Prize The Old Maid play rendition Legion of Honor for World War I services First woman to earn an honorary degree from Yale Unviersity “Keeping Up with the Joneses” is said to be a famous phrase about Edith Wharton’s wealthy family. The idiom means to strive to match one's neighbors in spending and social standing. Born as Edith Newbold Jones on January 24, 1862 in New York, New York, her prominent lifestyle led to many of her best works. Wharton stayed in Paris during World War I doing relief work that won her a Cross of the Legion of Honor. In the novel, Fighting France, published in 1915, she describes her experience during the war. The most well-known of her war stories, Xingu and Other Stories, was published in 1916. Other novels published were The Marne (1918), and A Son at the Front (1923). During this time she also published The Age of Innocence (1920) which won her a Pulitzer Prize. Themes in Her Literature Wharton was working on a novel, The Buccaneers, at the time of her death. The unfinished novel was published in 1938, and a version completed by author Marion Mainwaring was published in 1993. Wharton had many influential ancestors, including Ebenezer Stevens who participated in the Boston Tea Party. Written over 50 pieces of literature Accomplishments 1.Blackall, Jean Franz. "The Sledding Accident in Ethan Frome." Studies in Short Fiction 21.2 (Spring 1984): 145-146. Rpt. in Children's Literature Review. Ed. Tom Burns. Vol. 136. Detroit: Gale, 2008. Literature Resource Center. Web. 3 Mar. 2013. 2.Bloom, Harold. Edith Wharton's The Age of Innocence: Bloom Notes. 1st edition. 1. Broomall: Chelsea House Publishers, 1999. 11-13. Print. 3.Howe, Irving. Edith Wharton. EngleWoods Cliff: Prentice-Hall Inc., 1962. 1-89. Print. 4.Moss, Joyce, and George Wilson. Literature and Its Times. 5th edition. 2. Detroit, New York, Toronto, London: Library of Congress, 1999. 125-129. Print. 5.Reuben, Paul P. "Chapter 7: Edith Wharton." PAL: Perspectives in American Literature- A Research and Reference Guide. http://www.csustan.edu/english/reuben/pal/chap7/wharton.html). 6.Shuman, R. Baird. Great American Writers: Twentieth Century. 12. New York: Marshall Cavendish Corporation, 2002. 1611-1628. Print. 7."Wharton, Edith 1862-1937." American Decades. 2001. Encyclopedia.com. 4 Mar. 2013<http://www.encyclopedia.com>. Early Life Born in to a well-known and wealthy family, she was educated in her home and was an enthusiastic reader. While learning in private, she began writing poetry which was published in the Atlantic Monthly in 1880. She wedded Edward Wharton, a rich Boston banker, at 23 years old. Wharton began to pursue her career in writing after being bored with her social life, and troubled about her husband’s ill mental and physical health. Her family was full of disapproval of the idea. In 1899, she moved to Lenox, Massachusetts and found many literary associates. 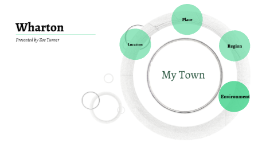 Transcript: Presented by Zoe Turner My Town Wharton Location Location How it developed here How Wharton Developed Here It developed here because there is canal in Wharton. It helped people ship iron across to other people. They came here because, people were looking for jobs. Wharton was the best place to go because there was farming and mining. Why did people settle here? My house is behind a laundry mat. Relative Location Relative Location 9 Lane Way,Wharton NJ Absolute Location Absolute Location Place Place Human Characteristics Human Characteristics ~6,500 Residents ~44.3% Hispanic ~40.6% White ~6.51% Asian ~Hills ~Trees ~grass physical Characteristics Physical Characteristics Strategy Region ~Morris County ~New Jersey Formal Region Formal ~Fed-Ex ~Verizon Functional Region Functional Environment/Human Interaction Environment ~Farming ~Mining How we Depend on the Environment How we depend ~We cover the pool in the Winter ~Wear clothes according to weather How we adapt to the Environment How we adapted ~Canal ~Roads ~Houses How we Modified the Environment How we modified 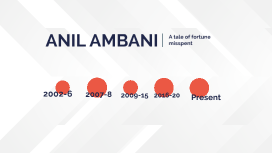 Transcript: A tale of fortune misspent ANIL AMBANI 2002-6 Dirubhai Ambani make both sons responsible in the company. No will granted. So, his wife has to come in to settle the dispute. No-compete contract signed, assigning each brother a different industry. 2002-6 2007-8 2007-8 Anil Ambani makes risky investments. Takes up construction projects recklessly. Is declared the sixth richest man in the world as per Forbes. Rs. 1.6 lakh crore worth market cap in early 2008 Multiplexes Owned around 700 multiplex screens globally A passionate movie lover Joined hands with DreamWorks Studios' filmmaker, Steven Spielberg to generate global quality entertainment. Bought a Rs. 350 cr. multiplex chain. Net worth 2007: $45 Billion Projects undertaken Took up 3 ultra mega power projects. Reliance Infrastructure focused on roads, power and railways 2009-15 2009-15 The late 2000's recession hit. Anil Ambani also took the blow. Market cap starts dropping drastically Net worth dropped to $13.7 Billion. Loses the billionaire tag 4G and 5G With the introduction of 4G and 5G, rivals like airtel were winning the market. Reliance Communications could not come in terms with the trend. Their technology could not exceed 2G and 3G services. In the end, Anil Ambani had to leave the sector to prevent further losses. Introduction of 4G & 5G No no-compete clause In 2010, the no compete clause which kept the brothers from overtaking each other was removed. Mukesh Ambani bought InfoTel and invests Rs. 48,000 cr. In 2016, Jio destroyed all telecom companies, including Anil Ambani's. Removal of no-compete clause The start of debt With Anil's reckless investment, investors and analysts started seeing unreliability. The projects undertaken weren't doing well with the lack of natural resources. Also, some minerals were in conflict with Mukesh Ambani, resulting higher prices of natural gases. Had to sell assets of Reliance Communications to brother in order to sort debts. The pivot 2016-20 2016-20 Debt started to build up. Mukesh Ambani refuses to take Rcom's liabilities. As of September 2018, the companies' stood at the debt of Rs.1.72 lakh crores. New position in the market The previously thriving companies' had a market cap of only Rs. 6,200 crore by 2019. Market Cap drops A costly failure In 2018, he shut down the construction of a power generation plant, resulting in a loss of 1.2 lakh crores and angry shareholders. In the same year, his ambitious project of Mumbai power distribution business to industrialist Adani for Rs. 18,800 crore. Sold Big Cinema multiplex to aid the debt. Projects fail Present Fights bankruptcy in 2020. Faces lawsuit of Rs. 5.5 Billion by Ericsson telecommunications. Mukesh Ambani gives brother Rs. 8 Billion. Now, his share at Reliance Infrastructure see a surge of 281% advancement and other companies are also seeing progress. Present 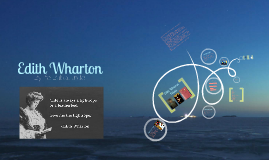