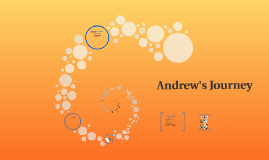 Transcript: Obvious things....... plus..... Build relationships Make time to have a coffee with someone you don't know Help everyone you can Use a recruiter Keep Linkedin profile up to date Apply to lots of positions (have a plan B) Change your name on facebook Dematic Bluescope research Ways to secure a job - Hints and Tips Thesis - Robot Wall Climber IBM Memcor Graduate IT Specialist Business Intelligence Specialist Mechanical Design and Control System Deloitte - Decision Science and Analytics Servian Cochlear UNSW Andrew's Journey 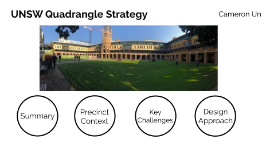 Transcript: Cameron Un UNSW Quadrangle Strategy Summary Summary The UNSW Quadrangle Strategy intends to conceive a public space that is recognisable by the community and improve connections to transport whilst exploring how the precinct functions as a whole. The UNSW Quadrangle Strategy will play an important role in increasing the liveliness of the precinct by incorporating an interactive design to attract students, staff and visitors. The strategy intends to reduce congestion in the Quadrangle which will provide a smoother path to public transport options. To improve the quality of the precinct, the strategy’s objectives are too: • Analyse which features of the Quadrangle are favourable and those that are inappropriate in its design. • Identify current issues which restrict the transformation of the Quadrangle. • Suggest several options to improve both the liveliness and access to public transportation of the Quadrangle. Strategy Objectives Objectives Precinct Context Precinct Context The UNSW Quadrangle is an important point of interchange between the upper and lower campus as well as public transport options. It is also a place where students can relax, gather to work on group projects or work individually. UNSW Quadrangle UNSW Campus Key Challenges There were a number of obstacles which restricted a satisfactory design of the Quadrangle which included: Lengthy and conflicting paths Makes it difficult for pedestrians to navigate around the Quadrangle without conflict. Path restriction by vehicular activity Occasionally trucks operate on the road parallel between High Street and the Quadrangle which causes congestion. Key Challenges Congestion Hot Routes Cold Routes Point of Congestion Timelapse Design Approach Design Approach Small Bridge & Ring Path Pedestrians are forced to conflict when using the crossroad style path. A small bridge over the intersection would allow pedestrians to cross on and under the bridge without conflict. The ring path will help pedestrians to manuever smoothly and create extra walking space. Multiple Entrances/Exits to High Street Many pedestrians are forced to funnel through one route which is also occasionally interrupted by construction efforts. To resolve this, more paths should be created. 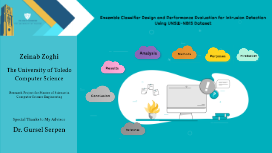 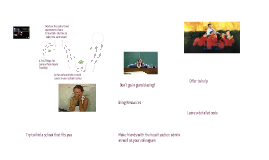 Transcript: A Few Things I’ve Learned from Casual Teaching Work on the content and appearance of your CV and take the time to tailor it to each school Arrive early and take a crash course in your school’s setup Bring Resources Don’t go in guns blazing! Offer to help Leave a detailed note Make friends with the head teacher: admin as well as your colleagues Try to find a school that fits you Best of luck! 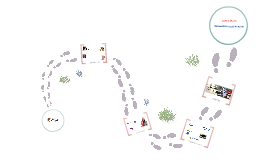 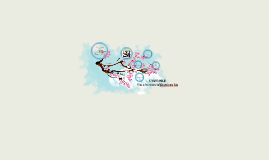 Transcript: Google site and project. My project Hi!Nice to meet you! UNSW PELE The adventure of Jingxiong Liu My name is Jingxiong Liu. I come from China,Jiangsu Province. I like traveling,doing execises and reading. And my favorite sport is jogging. Thank you! I am a foodie~ (1) Practice makes perfect (2)Success belong to the persevering. （3）One takes on the attributes of one's associates. My google site helps me a lot in recording my progress or my stories. But I didn't use it properly ,and I need to to log more things on my log book. TO BE CONTINUED.... What I have learned. My project is designed for reading skills. And I have learned a lot from it. The project isn't perfect,but I'll keep improving it. My main resources are <WSJ>,<Economists>,<NYT>,Qura,and everything worth reading for me.