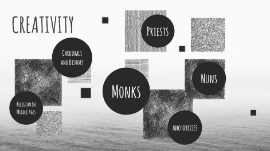 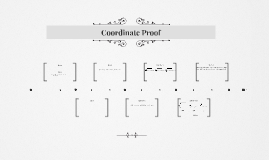 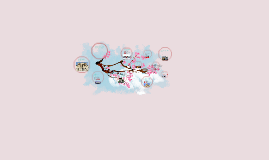 Transcript: built in 1819 by William Strickland doric Toledo Museum of Art https://wwcdn.weddingwire.com/vendor/35001_40000/37820/thumbnails/600x600_1257353542953-MMexterior.jpg http://www.toledomuseum.org/about/architecture/ http://www.toledomuseum.org/wordpress/wp-content/uploads/peristyle2.jpg http://toledoregionaltour.org/house-of-four-pillars https://c1.staticflickr.com/1/141/336300404_579e26ada4.jpg http://www.abrahamlincolnonline.org/lincoln/sites/memorial.htm http://media.web.britannica.com/eb-media/16/83216-050-BFBC914A.jpg https://upload.wikimedia.org/wikipedia/commons/e/e8/United_States_Capitol_Building.jpg https://www.visitthecapitol.gov/about-capitol http://www.nps.gov/inde/second-bank.htm https://upload.wikimedia.org/wikipedia/commons/0/07/Second_Bank_of_the_United_States_front.jpg http://washington.org/DC-guide-to/jefferson-memorial https://upload.wikimedia.org/wikipedia/commons/1/13/Jefferson_Memorial_At_Dusk_1.jpg https://upload.wikimedia.org/wikipedia/commons/4/44/Smithsonian_American_Art_Museum_exterior_3.jpg Built in 1792 by James Hoban Corinthian Made to be the home of the President The White House Designed by Edward B. Green and Harry W. Wachter in 1912 Ionic Made to display Edward Libbey's art collection to the public built in 1845 Doric Was part of the underground railroad built in 1922 by Pierre L' Enfant doric built to commemorate President Abraham Lincoln Designed by Thomas Jefferson ionic made to comemmorate President Thomas Jefferson Designed by Edward B. Green in 1933 Ionic Made for the museum's 1933 expansion Peristyle Theater Greek Columns in Modern Day United States Capitol Built in 1793 corinthian Made for Congress to meet Smithsonian Museum of Art House of Four Pillars The Second Bank of the United States The Jefferson Memorial Lincoln Memorial works cited 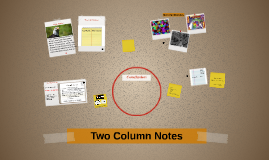 Transcript: Take a white board and marker Draw a line down the center Write "Key words" on the left Write "Information" on the right Rotate to the different stations Record keywords and information about the pictures you look at. Two Column Notes Eagle Activity http://www.flocabulary.com/note-taking-methods/ When reading: Look at the text structures Headings Subheadings Pictures Graphs Do not write what is already there Use your own words so you understand Meet the Microbes Two Column Notes Conclusion Key words Two Column Notes Key words Info Name Date Section Source Give me a . and a ? A statement about what I learned. A question I still have. Ticket Out the Door Two Column Notes Essential Questions H/W Meet the Microbes 1. Read 10 - H/W 2. Two column notes 3. Eagle Activity 4. Microbes Information 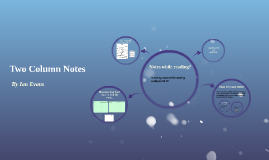 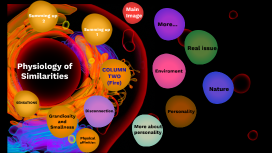 Transcript: Main Image More... Real issue Physiology of Similarities Enviroment COLUMN TWO (Fire) Nature Disconnection. Personality Grandiosity and Smallness More about personality The feeling of not being in control of the situation. It's no protection and no support to hold your hand. Essence They are very needy people. There is a naive element that lingers (persist) from Column One. They can apprehend the world through their intuition. They trust their gut instinct. How is it sustained? There is a defend self, not to fall (caer) from where it has reached. Hold on to his position. So, the theme is a SPREAD-FIGHT (lucha que se expande). EMOTIONS The issue is around the issue of separation from the overly protective, domineering, potentially castrating maternal influence of separation. Where is the struggle? It's against a disproportionately influential parent or domineering personality. What does it express? A struggle for individuality against the tenacious, oppressive maternal energy in order to build an independent Self. More... There is a struggle to separate and overcome the smothering(suffocate) embrace of the maternal force or any dominant figure. They have raised in an overprotective environment may find it difficult to be independent. A feeling of being under a powerful influence. More themes There are themes of repulsion and rejection, fear of being overtaken, avoidance of intimacy, excessive insistence on one's boundaries, and establishment of sharp (defined) boundaries. EGO It's required to set itself apart (differenciate), seeking to avoid and disconnect from the reality now imposed on him. The need for the Ego to distance itself from the feminine aspect will appear in women as coarseness (rudeness, vulgarity); as difficulties in feminine expression or lactation. More... More... It’s as the need to be different from the parents or the influential figure, to rebel and to doubt authority. . It's a need not always fulfilled. There is impulsivity in their nature. Like the spreading fire, they take initiative with adventurous enthusiasm. Fire needs to spread and explore. They are adventurers with immense energy. They deal with situations by pushing every obstacle out of the way. More... They are very temperamental. They get angry quickly, but forgive easily too. They are emotionally volatile yet very passionate. They can exhibit an explosive part of them but in an instant they can change their course. Then... He feels anger and resentment toward the aggressive world that threatens to devour him. They have a big personality. They love the life of a party and they can be loud, wild, and fun loving. And... Over-emphasis on self-expression without consideration for others' feelings. This can lead to selfishness, egotism or fanaticism. It's very difficult to get them to see things from anyone else's point of view because, deep inside themselves, they don't believe there is any other point of view; just their own. More... Facade... There is a external roughness and aggression cover up the soft, gentle nature within. Moto... “I want to do as I wish”, because if I remain devoted(loyal) to my roots, I will lose my individuality. There is quiet obstinacy and rebelliousness. Later on in the column that may become self-destructive. More... Women may be overly dominant, dictatorial, and in extreme cases even aggressive and warrior-like. Any coercion that is encountered creates immediate opposition. They have a strong sense of self. They can even be egoistic. A feeling is of being forsaken and of not belonging to society feel let down and betrayed by others. Feeling... There is feeling of being very unfortunate. They feel persecuted. They feel that they don't get what they deserve and are suffering for no (ningún) wrong of theirs. More... The destiny has been cruel to them and they try to overcome it. They feel that they function from a position of disadvantage. Then... This state which involves the rejection of the parents or the childhood framework, a necessary step during which the developing person defines himself as a distinct being and prepares himself for facing the external world. Meaning... This critical step in development is heroic, because renouncing the maternal quality comes at a cost. HERO... There are literal visions of saving the world (hero) and responsibility for the world, magnanimity, generosity, grandiosity and limitless benevolence, desire to be useful. More... Responsibility to the point of loss of self and exhaustion. There may be a tendency to give excessively and a strong desire to be useful. There may be difficulties in disconnecting from the protective parents and from external influences in general. How do I disconnect and be on my own? There are painful feelings of loneliness and disconnection. There are hurts that remain hidden, unspoken, and not even recognized. Fire Element Fire is that which is energetic and forceful. Fire gives them the desired drive (impulso) and passion. They are rational 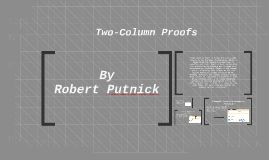 Transcript: Here is the problem prompt from lesson 14 that was a stumbling block to me. Example from the Geometry Textbook What I may have done wrong This week in math, I found the two-column proofs to be the most challenging. While I understand the numerous properties of equality and their implications, my problem was instinctively knowing how to move from statement to statement within a two-column proof. Something that helped me was the online Math-Cast video narrated by Mr. Thomas. However, the sample problem seemed much easier to comprehend, compared to some of my offline work. I am still slightly confused on writing statements for a two-column proof, but I think if I take my time with them, I'm sure I'll get better at posing correct statements. Two-Column Proofs What I thought was Challenging While trying to solve the offline problems, I often incorrectly wrote each statement, thus leading me to a wrong reason. For instance, when I was asked to prove the congruence of angles 2 & 3 in this problem below, I decided to compare angle statements. The answer sheet revealed that it was actually comparing side measurements. This one mistake led me to mess up subsequent steps in the proof. I think the most challenging thing was setting up each statement for each step. This is located on the left-hand column of a two-column proof. Determining the reasons for each step was not so difficult because you are relying on the different properties to justify each statement. Here is an example of a two-column proof from the Geometry textbook. I used this to aid me in making my own two-column proofs for various offline problems. By Robert Putnick 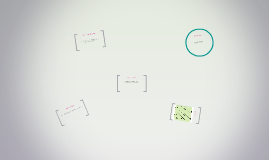 Transcript: Two Column Notes Supporting Details This is the main subject or idea in the article. Keep it simple and short! Conclusion These support the Main Idea, remember just one or two words. Your turn! Start with the Main Ideas What it looks like How to organize your thoughts and use nonfiction!