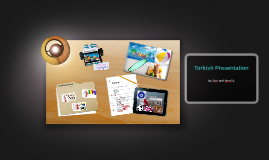 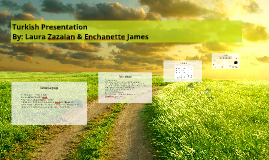 Transcript: Arabic Script “Lar” is an undotted back vowel, plural suffix added to “kapi” would form “kapilar” which means door. “ler” is a dotted front vowel, plural suffix added to “köylü” to produce “köylüler” which means villagers. Examples Let's Talk Turkey!..er-ish Turkish Grammar Agglutination- Suffixes are attached to the end of the word whether it is a noun or verb. Suffixes add to the words meaning and/ or mark grammatical function Does not mark grammar, it does not have gender pronouns. A single word marks “he, she, it” etc. Phonetic language- each letter retains it’s own sound. For example, in English the sound of letters can change, like “fat, fare, fate” In Turkish, there is no such pronunciation change. Back (thick) vowels Front (thin) vowels A-not dot E-dot a,i,o,u e,ï,ö,ü http://www.bbc.co.uk/languages/other/turkish/guide/facts.shtml http://www.omniglot.com/writing/turkish.htm http://www.turkishlanguage.co.uk/about.htm Turkish Vowel Harmony Turkish has a 2-dimensional vowel harmony system, where vowels are characterized by two features: [±front] and [±rounded]. Vowel harmony states that words may not contain both front and back vowels. Therefore, most grammatical suffixes come in front and back forms, e.g. Türkiye'de "in Turkey" but Almanya'da "in Germany". Turkish Noun Conditions • Language Family: Turkic • Subdivision: West Oghuz • 72 million people speak Turkish • Spoken in Iraq, Greece, Bulgaria, Kosovo, Albania and other regions of eastern Europe among many other places. Standard Turkish is based on the dialect of Istanbul. Turkish Presentation By: Laura Zazaian & Enchanette James Latin Alphabet Nominative: The root word carries no suffix – (el) el-the hand, hand Genitive: “Belonging to” ‘s, of (el-in) elin-the hand’s, of the hand Accusative: Meaning specific “the” direct object of a verb- (e-li) eli- the hand Dative: Movement: to, towards (el-e) ele- to/ towards the hand Locative: Place and position: in, on, at (el-de) elde- in/on/at the hand Ablative: Movement away: from, by, (el-den) elden- from, by the hand Turkish Language Each letter has one sound, and there are no confusing double consonants (like sh, ch, ght and so on), so each letter is pronounced separately. The pronunciation is as you would expect, except for the following: • c is pronounced like an English j (in jam). So sadece (only/just) is pronounced sah-deh-jeh • ç is pronounced like an English ch (in charge) – not s as in Latin based languages. • ğ is silent (elongates previous vowel sound) • ş is “sh” • ı – looks like an i without the dot. Confusingly when capitalised it is I (English i capitalised), but Turkish i capitalised is İ – so the city I was living in was actually İstanbul, not Istanbul). ı is pronounced as a schwa. • Umlauted ö/ü vowels work as in German. The first thing to point out is that Turkish is a phonetically written language and uses the Latin script. Up until Atatürk made some revolutionary changes to the language in the last century it was written using Arabic script. Each letter has one sound, and there are no confusing double consonants (like sh, ch, ght and so on), so each letter is pronounced separately. The pronunciation is as you would expect, except for the following: Turkish Alphabet: Until 1928, the Turkish Alphabet was known as the Ottoman Turkish Script. In 1928, in an effort to modernize Turkish, the Arabic script was replaced with a version of the Latin alphabet and is used now to this day. Consists of 21 Consonants and 8 vowels Total of 29 letters No lengthening for vowels The eight vowels are divided into two groups: 4 Undotted vowels: - a ı o u. The 4 Dotted Vowels - e i ö ü Turkish Vowel Harmony Epenthesis Pronunciation Quiz Turkish Alphabet Vowel Harmony Rule References A rule where subsequent vowels follow in a word or suffix follow the vowel properties of the previous vowel. Vowels can mirror the previous vowel in a word by changing the pronunciation and spelling. All Turkish words of Altaic Turkic Origin are pronounced either with the E-dotted group or A-undotted group of vowels. Turkish Vowels In phonology, epenthesis means the addition of one or more sounds to a word (usually the interior). Epenthesis may be divided into two types: excrescence, for the addition of a consonant, and anaptyxis for the addition of a vowel. In Turkish the epenthetic vowel undergoes vowel harmony. Turkish Vowel Harmony sehir (city) vakit (time) merhaba (hello) Benim adım (my name is) Sınıfta Türkçe konuşurlar (I speak Turkish in class.) 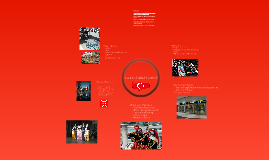 Transcript: Toronto Turkish Festival When and Where Is It ? August 7th and 8th From 10am to 10 pm at Yonge & Dundas Square, in the heart of downtown Toronto. What's It All About? Culture Food Music (traditional & modern) Dancing Art Celebrating identity How Much Is It? Entrance fee = $0 Only pay for food & things from gift shops All proceeds go to Nil Academy How Do I Get There? On the Yonge-University-Spadina Subway line Get off at Dundas Exit out of the mall Why Should I Even Go? Experience new culture Warm, inviting environment Live, and entertaining Fun for all ages Wonderful people Bibliography http://freshlyeducatedmen.files.wordpress.com/2009/07/turkish-festival.jpg?w=120&h=117 http://en.wikipedia.org/wiki/The_Toronto_Turkish_Festival http://www.torontoturkishfestival.org/indexen.htm http://upload.wikimedia.org/wikipedia/en/c/cd/TTC_Dundas_Station.jpg http://pixdaus.com/pics/1247446710eUfCdHu.jpg 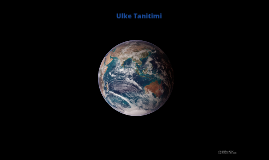 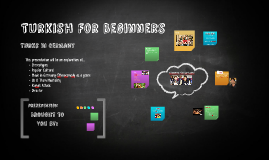 Transcript: Brought to You By: Real Housewife Justin Bieber & Hannah Montana 50 Cent posters Presentation This presentation will be an exploration of... Stereotypes Popular Cultural Made in Germany: Ethnocomedy as a genre Us V. Them Mentality Kanak Attack Director Turkish For Beginners Kanak Attak Türkisch für Anfänger Why and how did it come about? What is it? - ridicules ethnic stereotypes - ethnic drag as a tool - act of community - celebration of hybridity as identity German nationals against foreign immigrants The idea of assimilation or integration Assimilation Integration is the ideal way of creating a cohesive populace Turks in Germany Us v. Them Ethnocomedy ​-Anti-racism -influence from 1900s -what was the Kanak Attak? -Focus on culture Popculture Recap! Director: Bora Dagtekin Directed, produced, and wrote screenplay Creator credit and wrote 40 episodes of the TV series Turkish for Beginners Received the Grimme-Pries and the Civis Media Prize in 2007. Stereotypes Feminist Meathead(typical guy) Conservative Muslim Daughter Lonely Mother Creepy Kid Brother Crazy Turkish Dad 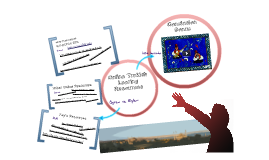 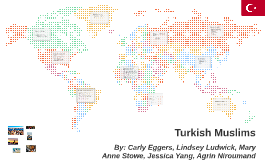 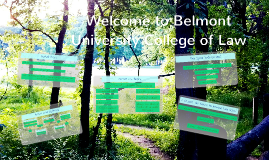