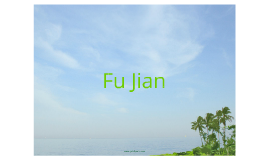 Transcript: Fu Jian The map of Fujian Wuyi Mountain is one of the most popular and most important places in Fujian. There are a lot of plants and mannals. The average temp of Wuyi Mountain is 17.6 degrees celsius ( it is equal to 63.68 degree fahrenheit). It is not too hot or too cold during the year. Most tourists come to visit Wuyi Mountain in summer. And every year there are 63,950,000 tourists to come here for their summer vacation. The most famous river in Wuyi Mountain is Jiuqu River, and there are a lot of bamboo rafts, you can sit on the bamboo raft and see the view of Wuyi Mountain. Qingyun Mountain is the national AAAA science zone. It is 75 km far away from Fuzhou City.That spend you 2 hours from Fuzhou City to Qingyun Mountain. The weather there is very cool in summer, because there are a lot of river. And it is about 7 1000-kilometer tall peaks and 9 canyons and rivers. That is really a beautiful places to visit. Three Lanes and Seven Alleys is the most oldest street in China. There are a lot of famous people lived there before, like Binxin, famous writer in China. The three lanes refer to Wenru Lane, Yijin Lane, and Guanglu Lane, while the seven alleys refer to Huang Alley, Gong Alley, Yangqiao Alley, Langguan Alley, Ta Alley, Anmin Alley, and Jipi Alley. Nowadays the Jiqi Alley, Yangqiao Alley and Guanglu Lane have been reconstructed into driveways, only two lanes and five alleys are remained. The most popular food in Three Lanes and Seven Alleys is called Yanpi, and they made from pounding pork. You can learn how to do that in Three Lanes and Seven Alleys. The distance from Fujian to New York 7751 miles or 12471.36 kilometers Agency's name : Travel Fujian Company Phone number: (0591)-88373827 Address: 12 Xiahang Road, China Name for contact: Xiaoxiao Cao Fujian is a very beautiful place, it is in the southeast of China. And it made by 9 citys, and I was lived in Fujian City before I went to the United States. The climate of Fujian is very warm and humid, the average temp in spring is 17.6 degrees, the average temp in summer is 27 degrees, the average temp in fall is 21 degrees, and the average temp in winter is 11 degrees. It is not very cold in winter but very hot in summer. And for the most time of summer, it rains. Culture Many famous teas originate from Fujian, including oolong, Wuyi Yancha, and Fuzhou jasmine tea.Fujian tea ceremony is an elaborate way of preparing and serving tea. In fact, the English word "tea" is borrowed from Min nan language. And there are many special festival in China, and people celebrate in speical ways, for example, in Duanwu festival, we always have a game which is called dragon boat game, that is for a famous guy named Quyuan. At fist time, they drove boats to find his body, but now, people have this game, and want Quyuan know that all of the people are health and we are happy, do not worried about us. For the language of Fujian, of course, Chinese (Mandarin), and we also have our local language in Fujian, it is called Hokkien, and most people used it in the south part of Fujian and Taiwan. 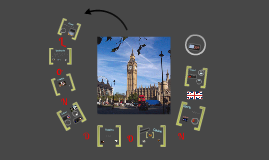 Transcript: The British Airways London Eye is the largest Ferris wheel in the world. Fish and Chips, an iconic British meal. London has a temperate oceanic climate. London's summer average is 75.2 °F. London receives about 24 inches in precipitation each year. London is the world's 3rd busiest film center, producing movies from Harry Potter to Notting Hill. Westminster Abbey is the burial place for England's kings and queens. It is also the site of many royal weddings, like Prince William's marriage to Kate Middleton. The Making of Harry Potter Warner Bros. Studio Tour. D N London is home to many famous landmarks such as Buckingham Palace, Big Ben, the London Eye, St. Paul's Cathedral, and Westminster Abbey. Climate London's rich history and cultural value are enough to draw any type of tourist to this classic city. Its wide variety of activites shows that there is something for all ages. Soldiers from the Queen's Foot Guard march to Buckingham Palace during the Changing of the Guard ceremony. Travel to London may include flying into one of its many airports, such as Gatwick, 45 kilometers south of the city. Sports London is home to some of the world's premier shopping, ranging from high end department stores to markets. Harrod's Department Store London is also very fond of its bus systems. Camden is one of London's most popular open air markets There are more languages spoken in London than in any other city in the world. L Afternoon Tea is a well-known English stereotype, but is still a common request from tourists. Culture Landmarks Most people in London, whether resident or tourist, use the "Tube" or Underground transportation as a quick and effective way of traveling throughout the city. London is also the only city that has held the Olympics three times, its third time being this summer. Travel London's activities range from musicals to studio tours to the historic Changing of the Guard. London is home to many sports teams, including rugby teams, cricket teams, and football (soccer) teams. Cuisine This tour gives an in-depth look at the making of the famous 8 part series. Arsenal is one of England's football teams that are based in London. Winters are usually cold, and snow falls about 3-5 times a year. Temperatures in the winter are usually between 24-57 degrees Fahrenheit. O Oyster cards and travelers cards are available for quick payment and access for use on the Tube. These buses are the iconic double-deckers that London is famous for. They provide an effective transport method and sightseeing opportunities. o N A third of the UK's archives are located in London, including the Magna Carta, which is kept at the National Archives. London's cuisine is almost as rich as its history, especially since many of their local traditions have been passed down for centuries. Buckingham Palace is home to Britain's Royal Family. Activities Shopping Britain's, and possibly the world's, most famous store includes departments for nearly everything, including an extensive Hair and Beauty section and a Christmas Grotto. Over the past 5 years, London based recording artists, such as Adele and Coldplay, have grossed around 1.9 billion pounds in worldwide sales. Although its cuisine doesn't compare to that of Italy or France, Londoners still believe that their food is exceptional. 14 London restaurants were placed in the world's top 50 restaurants in 2010. London Bridge--the subject of a popular nursery rhyme--has stood in London since Roman times, but the modern bridge was completed in 1972. It remains a prime representation of London with its archeitecture and fame.