Transcript: THE ROBOTIC TANK COUGAR The military tank called the Cougar is a classified Armored Vehicle it can carry at least 3 crew men and is used for reconnaissance and combat-support. 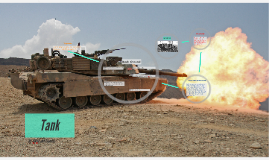 Transcript: What is it?: A war vehicle used to go over rough terrains. Who invented it?: Lancelot de Mole When?: Sept 6, 1915 Where?: Great Britain Why?: The army needed an armored vehicle to go across rough terrain and transport soldiers. It impacted politics because it cost a lot of money and needed to be payed for. The first tank By GRed and Charles Tank How it changed the world Importance Back Ground The army needed a mobile vehicle that could provide protection to the driver and that could drive through rough terrains to get closer in enemy territory. Impacts Before the tank was invented, crossing muddy and rough terrains was hard. Crossing enemy lines was much harder, there was no safe way to go through trenches, break through barbed wire or pass enemy fire. Also tanks helped move artillery that couldn't be moved by cars or trucks. Tanks gave armies many advantages in war. 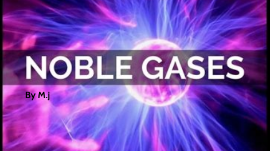 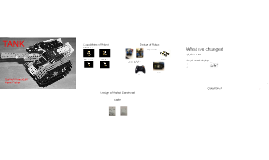 Transcript: Questions? Capabilities of Robot lego pieces & rivets batteries 1. wheels Movement of Gun Design of Robot Continued TANK Hannah Heyerdahl Kevin Fisher from what was originally written changed the music that plays physical structure Design of Robot remote also based on distance it has to other robots code What we changed 3. 2. Plays Music 2 servo motors for wheels 1 servo motor for gun Driving Capabilities 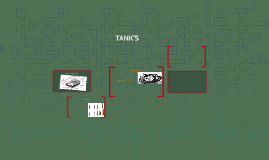 Transcript: history of tanks parts of the tank TANK'S Tank bullets The history of tanks began in WW1 when armored all terrain vehicles were a,response of trench warfare.here is a picture of a WW1 tank 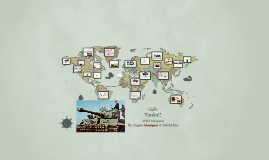 Transcript: (Notice that (A) is 30 mm thick, but when tilted 45 degrees, the thickness increases to 42.4mm) WW1 TANKS (World War Two Tank) (Flying machine , designed by Da Vinci in 1485) The first concept of what would become the modern tank was concieved by the ancient Romans, who had a military formation known as "The Tortoise," where a group of soldiers would lock their shields together to protect them from arrows, essentially forming a human tank. The Tortoise or formation was one of the most famous formations used by the Romans in battle. In 1939, most armies thought of an armored division as a mass of tanks with relatively limited support from the other arms. By 1943, the same armies had evolved armored divisions that were a balance of different arms and services, each of which had to be as mobile and almost as protected as the tanks they accompanied. MODERN TANKS The shape of the outer shell of the WW2 tank was also very different from the WW1 tank. TANK Massed armies still used tanks to great impact today. -At first the tank looked more like a warship than a land weapon, hence the name "Landship". -The initiative was codenamed "tank" because the British shipped their new secret weapon in crates marked "tanks" in order to disguise what was really inside. -The first prototypes were completed in early 1916 and by mid 1916 the first several dozen tanks were at the front. THE ROMAN TORTOISE FORMATION Leonardo Da Vinci designed his armored car while he was under the patronage of Ludouico Sforza in 1487. Da Vinci wrote the following to Sforza: " I can make armored cars, safe and unassailable, which will enter the closed ranks of the enemy with their artillery, and no company of soldiers is so great that it will not break through them. And behind these our infantry will be able to follow quite unharmed and without any opposition". Nothing similar to Leonardo Da Vinci's tanlk would be seen again until World War One, about 400 years later. WW1 Weapon By: Logan Madigan & David Roy Tanks!! -A max speed of 4MPH -Ability to turn sharply at top speed -Ability to climb a 5 foot parapit -Ability to cross an 8 foot gap, -A working radius of 20 miles -A crew of 10 men on board -Machine guns -Da Vinci designed a gear mechanism with cranks which were located inside the car. These hand cranks were used for propulsion for the vehicle. -A conical cover made of wood was meant to protect the crew inside of the car. This conical cover would have been built using the sloped armor technique. -On top of the structure, a sighting turret gave the advantage of having a mobile, harbored lookout. Leonardo Da Vinci THE TANK SHOULD HAVE: MODERN TANKS EVOLUTION, BABY!! A heavy armored fighting vehicle carrying guns and moving on a continuous articulated metal track. (Da Vinci's original drawing) (THE TORTOISE FORMATION) -Allied tanks became faster and more reliable (fewer mechanical breakdowns) -However, tanks were not available in large supply until late in the war. -Canadians actually only had 8 tanks during the battle of Vimmy Ridge. http://www.warmuseum.ca/firstworldwar/history/battles-and-fighting/weapons-on-land/chars-et-vehicules-blindes/ http://ww1facts.net/the-land-war/ww1-tanks/ http://www.historywiz.com/tank.htm http://www.dkfindout.com/us/science/famous-scientists/leonardo-da-vinci/ http://www.primaryhomeworkhelp.co.uk/romans/formation.html LEONARDO DA VINCI'S ARMORED CAR -In November, 1917, the British Third army launched a concentrated tank offensive around Cambrai. It surprised the enemy and was the most successful tank attack since the war began. -In 1918, many more tanks were available, with British and French having hundreds of them at their disposal during the summer attacks at Le Hamel and Soissons. -The tank was not decisive during the war but ut added weapons to the allied arsenal. -There was a total of 22 types of tanks used in WW1. SLOPED ARMOR -The First World war tank was developed from the interest of some military officers in the combination of tractors with caterpillar tracks as means of crossing trenches and other obstacles and breaking through barbed wire. -After a successful field demonstration in 1915, Britain established a secret "Landships committee" to study the military prospects of the vehicle. -Renault FT provided the accepted design – crew in the front, engine in the back, with a fully rotating gun or cannon turret at the top In 1914, Lieutenant-Colonal Ernest Swinton proposed the development of a new kind of fighting vehicle. Swinton needed an example of the machine that he believed would alter warfare on the Western Front. By June ninth, 1915, agreement was made regarding what the new weapon should be. -Britain first used tanks during the battle of Flers- Courcelette (part of the battle of the Somme) in September 1916. The tanks proved to be effective in performing most of the tasks they were built to do, such as crossing trenches and pushing their way through barbed wire, however, they were not able to