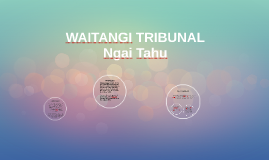 Transcript: PROCESS GRIEVANCE The land was brought off of the Tribe with a contract that was signed saying that they would build schools and hospitals. When this never happened, the land wasn't given back. They didn't have access to places that thehad spiritual meanings to them and food and resources. There were also disputes about the boundaries and the Crown had failed to established schools and hospitals as they had promised. There were multiple discussions about the settlement that was lead by Sir Tipene O'Regan . Sir Tipene and others picked up the legacy of the claim in the 1980s. The draft deed of the Ngai Tahu Settlement was finalised in October 1996 and was approved by parliament in September 29, 1998. They were given compensation valued at $170million. The Ngai Tahu were given ownership of Pounamu, they were given certain rights to their sites of significance, and also some role in managing conservation estate resources that were within their boundaries. The Crown also expressed a profound regret and apology for their hardship and suffering. Their secret mountain (Mt Cook) was to be returned to the tribe and was later gifted to the nation. The Tribunals report in 1991 had outlined a story of dispossession, deceit, broken promises and inflicted poverty. The claim covered land, sea fisheries, rights to pounamu and mahinga kai (traditional food sources). Protests began in 1849 for the low prices the Crown paid for their land, unclear boundaries, forced sale of the land which was very sacred to them and the promise they made which they did not fulfill. This was the first significant claim made to the Waitangi Tribunal and remains as one of the largest today. SETTLEMENT WAITANGI TRIBUNAL Ngai Tahu 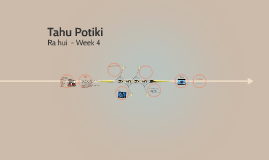 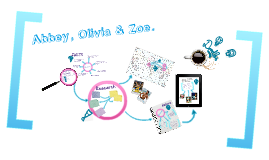 Transcript: Abbey, Olivia & Zoe. Timana quits footy over racist remark. remarkable person of significance like the rest of us. nsw origin Plays centre Currently playing for Penrith Panthers Aboriginal rugby league player Previously played for Paramata Eels Nationality: Aboriginal, Maori decent Date of Birth : 16 October, 1980 Height : 185 cm Weight : 98 kg Position : Centre Research "We are still hearing the same things that my mother was hearing when she was little." Timana Tahu HIS STORY Timana's mother is of Aborinal decent, and his father of Maori backround. Timana's mother was brought up in a mission and moved to Bourke where Timana was born. ''One day I was walking in Bourke by myself,'' Timana says. ''I had no money, I was starving, didn't have many clothes and my friends were doing bad [stuff] like stealing and whatnot. They were going down the wrong path, I was following them and I realised I hated the person who I was. I hated myself. And I said to myself, 'I want to change my life'.'' ''Dad loved me but I probably didn't feel like I was getting the attention I needed from both of them,'' Timana says without so much as a hint of disdain or sadness. ''A few friends of mine were going to the hostels and said you get to go to school and you get shoes, clothes. And I was just like, 'New shoes! I wanna go'. ''It was tough growing up there, so I ended up going. I did it on my own back - I caught a bus.'' Tahu walks out on Blues after offensive comments from Andrew Johns Offensive comments by Blues legend and current assistant coach Andrew Johns led to NSW winger Timana Tahu walking out of the NSW origin camp. FACTS (cc) photo by jimmyharris on Flickr (cc) photo by Metro Centric on Flickr TIMANA TAHU Timana Tahu San Francisco Budapest Notes Timana Tahu (cc) photo by Metro Centric on Flickr Stockholm Important Details (cc) photo by Franco Folini on Flickr 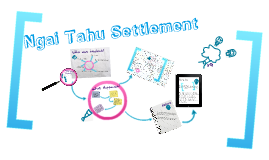 Transcript: Ngai Tahu Settlement Who was involved? What Happened? The "land bank" was set up in 1991. While the Ngai Tahu claim was still outstanding as protection. (cc) photo by Franco Folini on Flickr Matiaha Tiramorehu Matiaha Tiramorehu was the Rangatira of the tribe. Rakiihia Tau People of Tahu The Ngai Tahu Wahnui The Crown (cc) photo by Metro Centric on Flickr The land that the Crown bought for almost a penny an acre was actually economically valued at $20 billion. The Ngai Tahu Tribe have the same views about land as the europeans,that the land has value. Alexander Mackay Rakiihia Tau, filed for the claim The Crown bought 530,000 acres off the Tahu tribe. Results x9 The Crown is the Royalty at the time. The Maori have giving the Europeans what they promised but do not feel that the Europeans have given back what was deserved. Almost 150 years later the Tahu tribe singned the Deed of Settlement that provided compensation valued at $170 million. Notes (cc) photo by Metro Centric on Flickr New Zealand Alexander Mackay was The Native Court Judge and Commissioner Thye claim was presented in nine peices- The nine trees of Ngai Tahu. The first eight trees stand for different pieces of land bought fromn the tribe the ninth tree represents the food recsources of the Ngai Tahu. (cc) photo by jimmyharris on Flickr Important Details The Tahu Tribe protest began in 1848 when the realise they had got the bad end of the bargin. 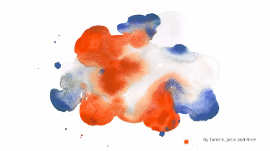 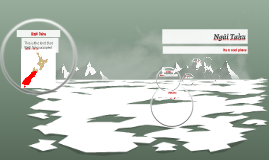 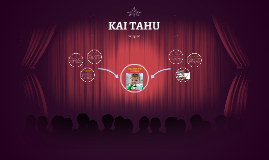 Transcript: COLONISATION OF KAI TAHU Archaeology reveals that settlements were predominantly coastal, probably to access their main food sources; which were from the ocean. As a result of population pressure about 500 – 800 years ago, settlements became more widespread. THANK YOU FOR LISTENING KAI TAHU Kai Tahu is the largest Maori tribe in New Zealand. The tribe extends from Blenheim, Mount Mahanga and Kahurangi Point in the north to Stewart Island (in the South Island). IWI Iwi are the largest social units in New Zealand Māori society. In the Māori language, the word iwi means "people" or "nation", and is often translated as "tribe". (The word iwi is both singular and plural in Māori.) FACTS KAI TAHU KAI TAHU: EARLY ON The first settlers of Polynesia colonised New Zealand between 1500 - 1700 BC. They found New Zealand uninhabited but full of wonderful new food sources. The first European explorer to sight New Zealand was Dutch navigator Abel Tasman on 13th December, 1642. Kai Tahu is also known as Ngāi Tahu. Ngāi Tahu means “people of Tahu”. The tribe’s founder is Tahu Pōtiki. The Kai Tahu tribe has tribal authority over 80% of the South Island. PICTURES