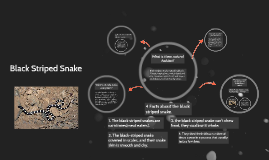 Transcript: If the Black striped snake becomes extinct, a rodent, bird, etc. would not or have a hard time making it because hey either feed off of them or get eaten off of them. So if one of those would become extinct the whole cycle would be messed up, because of the food cycle they run. 2. the black striped snake can't chew food, they swallow it whole. What is there natural habitat? Black Striped Snake natural habitat is: Forests tropical wet, moist, cloud and dry, savannas, agricultural landscapes, and edges of wet or marshy areas. where does it live? Shrew, Mouse, Insects, Grass, Rabbit,Cougar, and Deer. This is a fairly common snake, at least in the southern part of the range. In southern Texas found several individuals within a short time and said that the species is "fairly common and in no immediate danger of being extinct". How can we save/preserve them? A good way to save black striped snakes is to stop killing them. The more we kill them or the more we don't care for them the more likely they could become extinct. A good way is to have a shelter not just for the black striped snake but for all snakes that have a chance of becoming extinct. Endangerment The black striped snake has a habitat of forest also lives near loose, sandy soil habitats with scattered debris and piles of rotting cacti. It may also be seen in seeps in the soil that come when the soil dries out quickly or around buildings or construction sites. 3. The black-striped snake covered in scales, and their snake skin is smooth and dry. Scientific name of black striped snake is the: Coniophanes imperialis. 4 Facts about the black striped snake. Black Striped Snake Picture/Photgraph 1. The black striped snakes are carnivores(meat eaters). What is its role in the ecosystem? What species would be affected if it would become extinct? 4. They shed their skin a number of times a year in a process that usually lasts a few days.