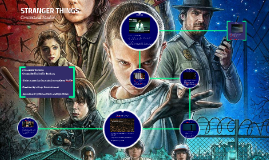 Transcript: Contextual Studies Editing Mise en scene Mise en scene Camerawork -Use of high shot shows the light is powerful and it shows will is inferior -Juxtaposes what we think is going to happen -Light bulb symbolises will? The light bulb also is a motif for how the audience doesn’t know what is going on at this point, therefore a literal lightbulb moment Sound Editing -generic horror techniques in editing. -Shot, react shot (shot of character, then what they see, then that characters reaction vocal/ facial/ visual) - Opening titles: Font is generic of horror genre. Is a Gothic text that has a very close resemblance to the titles included in 'Halloween' (Carpenter, 1978). STRANGER THINGS - She is wearing a hospital gown, no footwear, and has a shaved head. - Her appearance clashes with the forest that she is in. - The forest can convey she is lost STRANGER THINGS: -Created by The Duffer Brothers - Only 1 season has been aired currently on Netflix -Produced by 21 Laps Entertainment - Soundtrack by Michael Stein and Kyle Dixon Mise en scene - Their clothes and choice of game, says 80's - Their clothes also show that they lead normal lives. - The basement setting and choice of game shows that they are D&D players -Lighting indicates time of day. -11's mixed appearance shows inner conflict -Staging suggests that 11 is completely alone with herself -Diegetic sound for the TV makes it a lot more personal , in a way it feels like you re watching it with her - The Non-diegetic distorted breakup sound gives us the break from reality into the other side of elevens life. - The sound on the coke cane is emhasises as well as the music which gives what we are seeing on the screen more impact and purpose. More editing: -Post filming colour correction- dark orange tint (horror aesthetic) -Icy Blue colour filter- representing colder areas/ locations -Orange/ Brown/ Red colour filter- warm location. -Different colour filters can represent character emotions. -Also coloured filters used to emphasise colour during night time sequences/ settings. 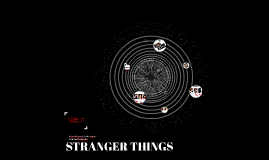 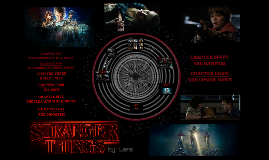 Transcript: Dustin by : Lara Hopper L T Eleven, also known as El, is one of the main characters of the first season of Stranger Things. She is a young girl with many psychokinetic gifts. Eleven has a mysterious past and is believed by Mike to be their best clue for finding Will. Eleven is portrayed by Millie Bobby Brown. T Nancy E Lucas Plot (Will's mom) Stranger Things is a horror/science fiction TV series created by the Duffer Brothers. It is about the disappearance of a 12 year old boy named Will Byers. Stranger Things takes place in the 1980's, and in a fictional town called Hawkins. R Fun Facts A - They auditioned 906 boys and 307 girls to find their young leads. Main Characters R Mike I R Eleven (El) Jonathan Will Byers vanishes during a night of many power outages across Hawkins . With the police chief and Will's family on the case , Will's three best friends, Mike, Dustin, and Lucas feel helpless and set out to find Will on their own. The three boys run into a psychokinetic girl named Eleven, who claims to know where Will is. As they uncover the truth, a government agency tries to cover it up, while a mysterious creature lurks below the surface. Where you can watch R L E (Mike's sister) - Millie (the girl who plays Eleven), shaved her head for the role. - The toddlers on set were terrified by the “monster”, but the crew calmed them down by telling them it was just like Monsters, Inc. I A -Before starting the show, the writers all watched (or rewatched) a large list of films, including E .T., Stand By Me, and The Goonies. Will Byers Joyce Michael "Mike" Wheeler, is portrayed by Finn Wolfhard. He is the best friend to Will , Lucas and Dustin . He is the first of the group to be close to Eleven and the first to believe her. Mike is also the brother of Nancy. He is a middle school student and a member of the AV club. It's a netflix Original Series (Will's older brother) 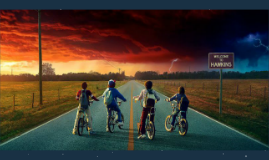 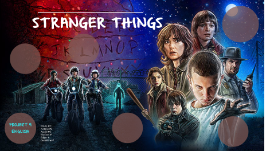 Transcript: MADE BY: Natalia #2 Astrid #6 Myriam # Edgar # Geraldine # STRANGER THINGS PROJECT 4 ENGLISH PROJECT 4 ENGLISH Original From 17 Chapters 2 seasons * First season July 15th 2016 * Second season Octuber 27th 2017 origin in UNITED STATES OF AMERICA creator HERMANOS DUFFER PLOT The story is set in INDIANA'S HAWKINS country during the eighties of the twentieth century, when a twelve-years-old bay named will mysteriously disappears. Soon after, a girl, apparently fugitive and with telekinetic powers, meets Mike, Dustin and Lucas, friends of Will and helps them in the search for he. characters MIKE MIKE Average slim stature with freckles and curly hair, is happy, fun, interesting, something serious and courageous. Will's best friend an the one in love with Eleven ELEVEN ELEVEN She is nervious, misplaced, happy, scare and beautiful. With telekinetic powers and limited vocabulary. She be friends Lucas, Dustin and Mike. she in love with Mike. She scaped from the hawkins laboratory whare they conducted experiments with her. LUCAS LUCAS Nervous, determined, fearful, cheerful, angry and friendly. Average height, tan and chinese hair. Is one of the best friends of Will and the lover Max He is funny, cheerful, charismatic, friendly and scared. He has short stature, rizasy and chimuelo. Is one of the best friends of will. DUSTIN DUSTIN She is happy, adventurable, problematic, rebel, scared, average red hair, with frecles, and join the friend of Dustin, Lucas and Mike. She in love with Lucas MAX MAX It's a police officer it's a will seeker, it's high, fat and with a beard. He is the adoptive father of Eleven HOPPER HOPPER She is hysterical, scared, desperate, impatient. is average height, short hair, disheveled. it's mom of Will JOYCE JOYCE PERSONAL OPINION Geraldine Is that it is a serie that teaches that you enter has a lot athough sometimes you get bored. My favorite character is eleven because he has gone trough a loy and although he suffered a good person a is very beautiful. Geraldine Myriam My opinion about stranger things is, that I really like the plot of wich they are looking for their friend because of the fact that suddenly they disappeared and that they know a mysterious girl with unimaginable powers Myriam Personally, the series seems boring to me in many moments, it did not entretined me. The characters seem good to me, although the plot was not so much. One of the characters that interesed me most was Eleven, because she s an usually child, and with-powers, wich I call my attention. Natalia Natalia My opinion of this series is good and positive because the series has many aspects of my likes as the adventure, mistery, suspense, the powers and a bit of comedy. Is that it is a serie of his thougth that you enter has a lot akthough sometimes you get bored. Edgar Edgar Personally, this series is very good because contains moments of mistery, adventure, fear, funny and suspence.My favorite character is mike because is brave, interesting and very loyal. With so few chapters this series has become one of my favorites Astrid Astrid Thanks you for your attention 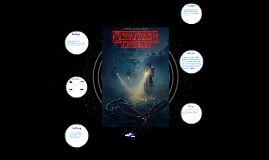 Transcript: Characters Eleven Mike wheeler Will Byers Lucas sinclair she also plays in the movie called intruders Plot Setting Noah schnapp plays as will byers. he plays in: the peanuts movies bridge of spies In a small town where everyone knows everyone, a peculiar incident starts a chain of events that leads to the disappearance of a child - which begins to tear at the fabric of an otherwise peaceful community. Tomato Meter - 95% Average Audience Score - 95% It has only gotten 3 bad reviews unfortunately the show did not win any awards but they were nominated for two The plot follows the disappearance of a young boy, and a telekinetic girl, who helps his friends in their search, while the boy's older brother, his mother, and the town police chief start their own investigations Millie bobby brown plays as eleven. Ratings Caleb Mclaughlin plays as caleb sinclair he plays in: shades of blue Noah dreams of origami fortunes finn wolfhard plays as mike wheeler he plays in: the resurrection the 100 supernatural aftermath it Ratings Dustin henderson Gaten matarazzo plays as dustin henderson and he was born without collarbones which effects the way his skull, teeth, and face are. unfortunately he doesn't play in any other movies. I rate this show a 10/10 because i love this show and you don't waste your time watching something boring because there is constant conflicts. Awards? 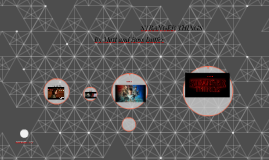 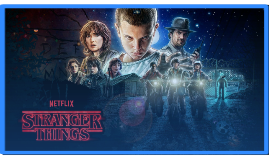 Transcript: Will Byers is a young boy who has mysteriously gone missing in Hawkins, Indiana on November 6, 1983. Joyce Byers played by Winona Ryder, frantically looks for her son with the help of Sheriff Jim Hooper who is played by David Harbour. As the characters uncover the truth, they are forced to take on a corrupt government agency who are trying to hide the truth and a sinister force that prowls in another dimension. Stranger Things is a thrilling adventure following each character on their journey to find Will Byers. The characters are forced to overcome major obstacles. Mike, Lucas, Dustin, and new friend Eleven are chased by the “Bad Men” who have kept eleven locked up in the local government facility doing tests on her since she was a child. Nancy and Jonathan are determined to find and kill the Demogorgon. While searching the woods where they believe the creature lives they find a portal to the “upside down” where the creature lives. Unknowingly Nancy ventures inside. While inside She loses track of where she came in. Jonathan just barely pulled Nancy out of the portal before the Demogorgon got her too. When the body of a young boy was found in the quarry, state police labelled the body as Will Byers. Joyce denies the police report and continues to believe her son is still alive. The people of Hawkins begin to think Joyce is losing her mind. Stranger Things does everything well, chilling scenes, timeless characters, and the monstrous adventures. It’s one of the only shows that will scare you, make you laugh, make you cry, and in the end still keep you wanting more and more. When it comes to acting Stranger Things hits the nail right on the coffin. Winona Ryder does and amazing job in represented a crazed and concern mother who feels it is her fualt that her son is missing.