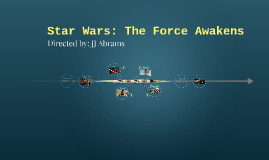 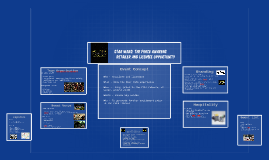 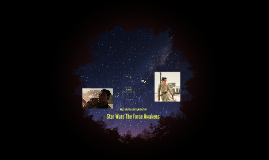 Transcript: 1.were going to bring blade builders and see how many cobinations we can make in 2min A:We think its luke skywalker top 5 reasons we like Our question and answer Our idea's What lightsabers were going to use when we do the battle and the blade builders Noah watch it on december 26 2015 and Carson watch it on january -- 2016 The top 5 reasons we like Star Wars are: 1.The Action and Sci-fi 2.How it's not normal (It's special) 3.The actors 4.the length of the movie 5.the pose's (especially Han Solo) Star Wars The Force Awakens Noah and Carson's project on Blade builders:Kylo Ren,Obi-Wan and 3 light dagers (one of them does not light up) Thanks for watching and listning The battle:Anakin and Obi-Wan 2.were going to bring "lightsabers" and do a lightsaber battle to see who can do better in a battle Q:Who is rey's father our passion is Star Wars The Force Awakens because we love it and we've seen it our passion 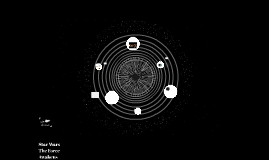 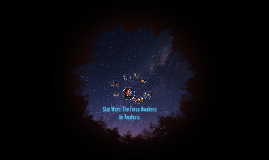 Transcript: Theme Colouring as a sign of Character Beiges, Browns, Leather and Cloth - Oh My! The Image Why, Yes! THE LOGO Themes Have I seen this before? Star Wars: The Force Awakens An Analysis. Tech-y. Robotic. Tall, Dark and Brooding. Blue and White? That's Alright! Red = Aggression, Therefore - Evil The Bad Guys The Good Guys Blue = Righteousness? Good? Red and Black? Take it back! Orange??? 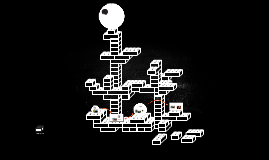 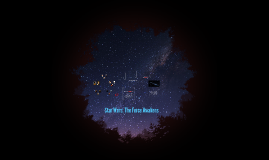 Transcript: A FORCE STRONG DESERT DWELLER WHO DREAMS OF MORE Bar located in Mos Eisley, Tatooine Han Solo IMPORTANT NOTE A small, cute droid carrying secret information The surrogate father figure is slain by someone previously close to them, who has turned to the dark side R2-D2 Poe Dameron PRODUCER: Kathleen Kennedy J. J. Abrams Bryan Burke RELEASE DATE: 18th December 2015 Thirty years after the Galactic Civil War, the First Order, and new threat Kylo Ren, has risen from the fallen Galactic Empire and seeks to eliminate the New Republic. The Resistance, backed by the Republic and led by General Leia Organa, opposes them while Leia searches for her missing brother, and the last known Jedi Knight, Luke Skywalker. When stormtrooper defector, Finn, crash-lands on desert planet Jakku, he meets Rey, a scavenger whose driod contains part of a secret map that concerns the whereabouts of Luke Skywalker. Together, they join forces with Han Solo to make sure the Resistance receives this information. Along the way, Rey realises that she too has the power of the force. Blue = light side Star Wars: The Force Awakens Symbol of Han's everlasting parental love for Kylo General Leia Organa RATED: PG-13 DISTRIBUTED BY: Walt Disney Studios Motion Pictures (Buena Vista) BOX OFFICE: $2.068 billion (worldwide) KYLO REN BEING A WORTHY SUCCESSOR IN THE EYES OF THE AUDIENCE: R2D2 BB-8 Death Star GENRE: Science Fiction,Action,Adventure Kylo Ren (Ben Solo) A DESERT PLANET Part of a series C3PO SYMBOLISM DIRECTOR: J. J. Abrams Starkiller Base KYLO REN Han Solo This walkway serves as the stage for Han and Ren's final interaction Red = dark side Kylo Ren (Ben Solo) is the son to Leia Organa and Han Solo, nephew to Luke Skywalker and grandson to Darth Vader (Anakin Skywalker) Captain Phasma Luke Skywalker First installment in the Star Wars sequel trilogy Seventh installment in the Star Wars film franchise Maz Kanata BROADCAST Chewbacca Jakku Rey An overconfident, smug ace pilot with rugged good looks Red and blue tones in these images can be understood as the light and dark side of the force. General Hux A seedy bar - filled with various space aliens and characters Reached #1 rank in its first weekend of release In release for about 24 weeks Widest release: 4,134 theaters Poe Dameron This scene in which Han Solo meets his fate when confronting his dark side turned son is a key example of how J.J Abrams has manipulated film and audio film elements to enhance the significance of each character's actions, bring clarity and emotional weight to the film and, to show the audience the inner mind of each character. "These images are a huge metaphoric exploration about the light and the dark side of the force, which I had long discussions with Rick about. The wide shot of the light glimmer just hitting the two of them - that’s the force essentially making its decision" - Kevin Jenkins, Supervising Art Director who worked on the original illustrations for the environment of this scene Similarities between The Force Awakens and A New Hope BB-8 We know and accept this because we've seen that the Jedi lightsabers (the light side of the force) are usually blue whilst the Sith lightsabers (the dark side) are red Rey PRODUCTION COMPANY: Lucasfilm Ltd. Bad Robot Productions Finn Emperor Palpatine 'Star Wars had the greatest villain in cinema history. So, how you bring a new villain into that world is a very tricky thing. We knew we had to do something f*cking bold.' J.J. Abrams on why Kylo Ren killed his father, Han Solo SUMMARY Tatooine Luke Skywalker SUB-GENRE:Fantasy An old, reclusive Dark Side master PRODUCTION BUDGET: $245 million Supreme Leader Snoke The hero watches helplessly as the surrogate father figure is slain BASED ON: Characters by George Lucas Supreme Leader Snoke Maz Kanata's Castle CHARACTERS A planet-destroyer superweapon station 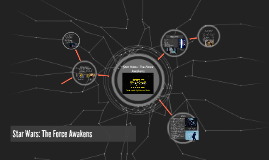 Transcript: The plan of the Resistance works. Rey fianally gets to fight Kylo Ren and sucessfully beats him The weapon of mass destruction is destroyed even though Han solo is killed by his son Kylo Ren Finn is badly hurt but can be saved. The Resistance finds the droid and buts all the pieces together. When they do Rey sets off with Chewbacca and in the Millennium Falcon and find the long lost Luke Skywalker. Exposition Protagonists: Rey Finn Antagonists: Kylo Ren General Hux Supreme Leader Snoke Captin Phasma Princess Laya Resolution Han and Chewbacca Rising Action Years after the fall of the empire Kylo Ren must keep the tradition going so the first order is set into place. Thier is a defector in The First Order A.K.A Finn. Rey is a scvenger wating on her family to return from the first order............ The first order raids a village where a secret piece of a map to find the long lost Luke Skywalker is being held by a droid This is where the defector Finn has made himself look suspicious when they shot the villagers Finn does not shoot making the leader Kylo Ren notice that he doesnt. Finn meets a Resistance pilot and they make it off the planet but crash land on the planet that Rey is on Finn thinks that th pilot is dead but he makes it. The First order have a weapon of mass destruction and they shhot it into the galaxy that the republic is in and destroys it. The Resistance is next.......... Finn Darth Vader Climax The Resistance developes a plan. Rey is taken as a prisoner moments after being given Luke Skywalkers Light Saber. Prezi made by Brianne Davis Rey: The Main Character Star Wars: The Force Awakens Kylo Ren Star Wars: The Force Awakens Falling Action The Big Fight Scene