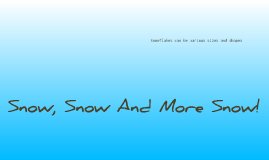 Transcript: Snow, Snow And More Snow! Snow is a type of precipitation within the Earth's atmosphere in the form of crystalline water ice, consisting of a multitude of snowflakes that fall from clouds Snowflakes can be various sizes and shapes Types which fall in the form of a ball due to melting and refreezing, rather than a flake, are known as graupel, with ice pellets and snow grains as examples of graupel 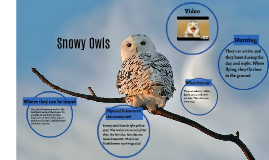 Transcript: They eat rodents, rabbits, ducks, geese, and other animals. Their diets are lemmings. What they eat Where they can be found They are active and they hunt during the day and night. When flying, they fly close to the ground. Snowy owls have bright yellow eyes. The males are more lighter than the females, females are more brownish. They have black/brown markings also! Hunting Physical Features of the snowy owl Video Snowy Owls You can find snowy owls in the Northern parts of the States. It's possible to see them in New England and New York. Also in Northern Quebec, and Northern Labrador Canada. 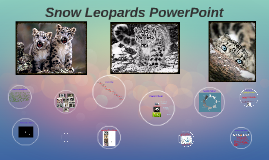 Transcript: There are up to 6,000 Snow leopards in the wild in 12 countries, but its numbers are gradually declining, with hunting and habitat loss this is just some of the reasons it is endangered. Snow leopards are endangered. Snow leopard Kingdom: Snow Leopards PowerPoint Mammalia FUN FACTS Producer Carnivora http://www.timetoast.com/timelines/the-evolution-of-leopards Their habitat extends throught 12 countries: Afghanistan, Bhutan, China, India, Kazakhstan, Kyrgyzstan, Mongolia, Nepal, Pakistan, Russia, Tajikistan,and Uzbeckistan Secondary Consumer Phylum: Panthera And here is a video :) Order: China is one of the most influental countries for our conservation efforts, as it contains as much as 60% of all snow leopards habitat areas. Fact 1: Snow leopards are up to 86-125cm long. They weight between 22-52kg, but males will be a third larger than females. Chordata Another Food chain Food Chain Evolution link Class: Numerous agencies are working to conserve the snow leopard and its threatened mountain ecosystem. These include the Snow Leopards Trust, the Snow Leopard Concervancy, the Snow Leopard Network, the Cat Specilist Group, and the Panthera Conservation. These groups and national goverments from the snowleopards range, nonprofits, and donors around the world worked together at the 10th international Snow Leopard confrence in Beijing. Family: Conservation Efforts Species: Bamboo Genus: Habitat / Biome Family Matter Taxonomy Endangered Status Felidae Fact 2: Snow leopards have wide, fur covered feet that act as snow shoes. Also these help to distrubute their weight over their soft feet and protect their soles from the freezing cold. Primary Consumer Fact 3: Unlike other big cats -like lions and tigers- snow leopards cant roar. P. uncia Animalia Giant Panda 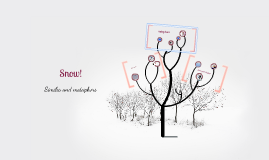 Transcript: Similes and metaphors Snow is like a big white cloud. metaphors Snow similes Snow is a warm hug. Sledding down a hill is like getting a cold chill from the wintery breeze. Snowflakes are crystals in my heart! Snow is like diamonds glistening in the sun. Ice skating is like gliding through the air on a cloud of ice. snow sports similes! Snow is a beautiful sensation! Snowflakes are like crystals in the sunshine. Snow! Blizzards are crazy tornadoes. Tubing in the snow is as fun as five days in Hollywood. 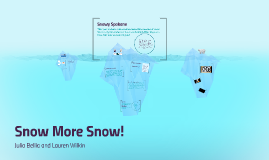 Transcript: Dixie Cups (5) Filtered hot water (microwaved to 180 degrees) Filtered cold water (refrigerated to 40 degrees) 2 tsp of salt 2 tsp of sugar Ruler Microwave Freezer Sharpie Thermometer Our campus uses a rock salt from Salt Depot called "Ice Heat" It is "environmentally friendly" and "not harmful to vegetation" as stated on the bag. We have used a lot of it this season and you have probably seen the remnants of it across campus. When we pour too much of it down, not all the crystals are used and little blue granules remain on the sidewalks. Average snowfall in Spokane over last 30 years = 44.9 inches This year = 60.6 inches Our snowfall this year beat the snowfall levels in Buffalo, New York and Boston, Massachusetts and Minneapolis, Minnesota. Accelerates freeze-and-thaw cycles Damages concrete Corrodes metal harming automobiles and house siding Damages plants in surrounding area Run off from sidewalks gets into nearby bodies of water and increases salinity This year we have witnessed an incredible amount of snow. Since early November we have watched it fall for days at a time. But now we want it gone! Acid Blue Liquid Colorant Blend Controlled Variables: Water level in millimeters Question 1% Magnesium Chloride How Does This Relate to Campus and the Spokane Area? Which of these substances—hot water, cold water, salt or sugar—melts ice the fastest? Graphed Results Water is a better heat-conductor than air. We see this occur all the time. Snow falls and makes ice and then rain can come later in the day and melt the snow. This is because the molecules in water are more dense than the molecules in the air. It allows more contact with the ice and a faster rate of heat transfer. Additionally, water has a higher heat capacity than air. Snow More Snow! Snowy Spokane room temperature (73ºF) lack of sunlight same size and shape of ice cubes (3oz.) use of filtered water ice cubes frozen at same temp for the same duration (10ºF for 24 hours) duration between measurements (10 minutes) water level was measured in millimeters for each This is the rock salt that Gonzaga uses around campus. Especially this winter, we see it everywhere. Most buildings have a bag of this just inside the door. This is mostly sodium chloride which can run off of our sidewalks into the grass, gardens and even into Lake Arthur and the Spokane River. Our results conclude, the most effective substances to melt ice occur in the following order from most to least effective melting rate: Cold water, hot water, salt, sugar, then no variable application. De-icing On Campus Time in minutes 97% Sodium Chloride Our Conclusion Hypothesis Salt and sugar interrupt the ice making process. Salt is made up of one sodium ion and one chloride ion. These split apart and bind to the hydrogen and oxygen that make up water. Due to the extra ions binding, the water can’t pack as densely. This lowers the temperature at which the water can freeze. Sugar works in a similar way, but with carbon, hydrogen and oxygen molecules. Sugar lowers freezing temperature, but not to the same level as salt. Materials: Dependent Variable Time Lapse of Sugar How do salt and sugar melt ice? The hot water will melt the ice cube the fastest. Harmful Effects of De-Icer This experiment looks at the different substances used to melt snow. Specifically, we tested hot water, cold water, salt and sugar to see which substance would melt ice the quickest. Time Lapse of Melting Time Lapse of Salt 1% Calcium Chloride Raw Data 1% Potassium Independent Variable Julia Bellia and Lauren Wilkin How does water melt ice? Sodium Chloride (NaCl) makes its way inot the soil, onto vegetation and into ground water. It is toxic to aquatic life and can't be naturally broken down, metabolized, absorbed or removed from the environment. 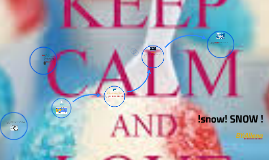 Transcript: !snow! If the ground is at 32 fenrenhiete then it will freeze the snow! the snow frezes at tempetures32 fhrenhiet and tures into snow! snow is clusters of ice that fall from clouds Water work cites:furgang kathy: every thing weather march14,2016 Snow forms when it evaperates into the clouds BY:Allena Water Falling From Clouds heres a fun fact you could always be a kid again if you want to taste a snow flake it is alway fun to be a k !snow! SNOW !