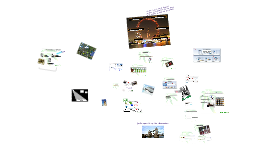 Transcript: Drive quality traffic "No, Sir, when a man is tired of London, he is tired of life; for there is in London all that life can afford." www.visitlondon.com www.londonandpartners.com Boss!! Introducing Receptional Link building & social media strategy 25 core terms Core target page optimisations Regain & maintain rank #1 Let's open it up for discussion... 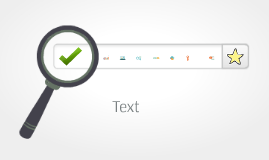 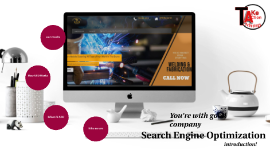 Transcript: Search Engine Optimization introduction! You're with good company Who we are Who we are Frank Amador Web Design SEO Strategy in Mind What IS SEO SEO, or search engine optimization, is the process of optimizing a website to get targeted traffic by ranking in search engines. People are searching for your products and services. What are they typing? Will they find you? Delivers Proven Results For example, people searching for “wedding invitations” on Google are likely shopping for invitations for their wedding. If your website sells wedding invitations, then ranking on the first page of Google when someone types in “wedding invitations” will send you lots of targeted leads that are ready to buy your products. This free traffic from the search engines could result in lots of revenue for your business. This free traffic from the search engines could result in lots of revenue for your business. Enables you to connect with customers Enables you to connect with customers How SEO Works General SEO process Keyword Research Keywords are the words and phrases that users type into Google. By doing keyword research, you can find popular keywords that are related to your products and services that can attract your target audience. Keyword tools: KW Finder SEM Rush KeywordTool.io Tittle tag / description Content Creation & On-Page Optimization distribute your content to relevant sites content syndication Off-Page Promotion and Link Building has intuitive navigation so that people can quickly find the content they are looking for. Websites should load quickly as slow loading sites frustrate users and cause them to leave Be sure that your site is easy to use User Experience our results We Dominate desktop searches, mobile searches, social media feeds, image search and video search to bump up your rankings on a monthly basis until you're #1. What we do Right SEO Is a long term Process How long does it take Progress Results 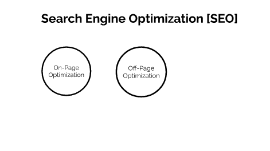 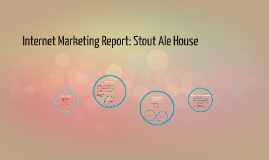 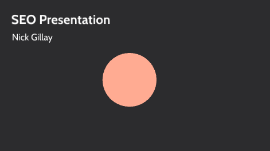 Transcript: Nick Gillay SEO Presentation What is SEO? Search Engine Optimization Description Description /Background -the process of maximizing the number of visitors to a particular website by ensuring that the site appears high on the list of results returned by a search engine. - created in 1997, -SEO exists – to help make sure that websites are appealing to the search engines. How it works How to build it Step 1: Find an “Opportunity Keyword” Step 2: Analyze Google’s First Page Step 3: Create Something Different… Or Better Step 4: Add a Hook Step 5: Optimize For On-Page SEO Step 6: Optimize For User Intent Step 7: Make Your Content Look Awesome Step 8: Build Links to Your Page Step 9: Improve and Update Your Content Bonus Step 1: Increase Your Domain Authority Bonus Step 2: Build a Community on Your Site https://backlinko.com/seo-strategy Potential uses in Recreation Can be used too... 1.)get website exposure 2.) make camp/ rec website more popular 3.) have your website appear first or in top/first search 4.)create key words and links that stand out and are less competitive Google- by far best example Bing.com yahoo.com Bodybuilding.com camp equipment Examples Examples an average SEO expert charges between $80 and $130 per hour. Further, the average monthly retainer lies somewhere between $750 and $1500 per month. Performance-based SEO is free to start, and has dynamic pricing. Cost Cost 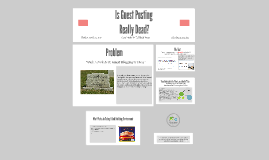 Transcript: According to Matt Cutts, guest blogging has "just gotten too spammy.I wouldn’t recommend accepting a guest blog post unless you are willing to vouch for someone personally or know them well...I wouldn’t recommend relying on guest posting, guest blogging sites, or guest blogging SEO as a link building strategy." The Test 1. Stay away from guest posting farms 2. Connect with people who already have an established Google Authorship 3. Build relationships, not links 4. How it works: John, a Conductor employee and contributor on the Conductor blog, has a guest post on Search Engine Land, which is an established and authoritative site in the industry, there is some "authority" that flows from Search Engine Land through John to Conductor. This is because an established authority has hosted quality content from John. Google now thinks that John has some authority and so his "host blog" (or site) reaps the value. Guest Post from 07/2013 on Business 2 Community (Domain Authority:80 ; PR: 6) "Guest blogging may be on Google's radar, but I wouldn't close the coffin lid just yet. " SEO Presentation Case Study by Ta'Rikah Jones In conclusion, guest posting isn't dead. It's all about Google Authorship, building relationships, finding quality sites and amazing content. Any additional Conductor authors, such as Sally, who are on an authoritative site are likely to reinforce signals that Conductor hosts "authorities". If Conductor hosts a multitude of authorities, they become an authority themselves. Transitioning into the "who is an authority?" Era Range: 09/24/2013 - 04/24/2014 Page Views: 13 Problem Range: 07/17/2013 - 04/24/2014 Page Views: 16 “Stick A Fork In It, Guest Blogging Is Done” Creating a trail of "authority breadcrumbs" for Google to follow. Guest Post from 09/2013 on Bright Work's blog (Domain Authority: 42; PR: 4) What Works in Today's Link Building Environment Friday, April 25, 2014 Is Guest Posting Really Dead?