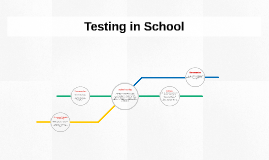 Transcript: Reccomendations A Transformed Score is any score that has been changed from a raw score in a systematic way. An IQ is a transformed score; because it is a mental age divided by a chronological age and multiplied by 100 School Testing Evaluation on teaching methods, there are two major ways of testing. Achievement tests and Aptitude tests. Achievement tests tell you about peoples skills over all. While an Aptitude test tests a specific skill. Differentiate Reliability and Validity Validity- How is measures what it is supposed to measure, checking against the norms Testing in School Transformed Score I would recommend an Aptitude test in specific subjects to get an accurate measure of how your students are learning in those subjects. Reliability- The consistency of a test, so that every completed test has a similar score There are several problems involved in testing. -Students could not test well generally -Testing creates a lot of stress leading to anxiety issues in the classroom -Testing may not be an accurate measure of knowledge because student can always guess. Problems 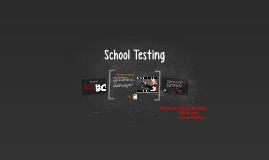 Transcript: Using alternate tests for minorities or exempting children with disabilities would be unfair to those students Separating them or trying to do so will create two, unequal systems, one with accountability and one without. 5th period: Patricia Gonzalez Fabian Mata George Montoya Standardized testing motivates teachers to work harder and more effectively. They can better identify areas of strength and weakness in their teaching plans and then can restructure them. Teachers will be more motivated to participate in professional development and support services to improve their instruction. The multiple-choice format used on standardized tests produces accurate information necessary to assess and improve American schools Stricter standards and increased testing are better preparing school students for college Standardized tests are reliable and objective measures of student achievement. Focuses on essential content and skills, eliminates time-wasting activities that don't produce learning gains, and motivates students to excel Teachers can also identify what content was not mastered by students and see which students have the greatest needs. TEACHING TO THE TEST School Testing Standardized tests such as the SAT and ACT have been shown to be effective in predicting a student's future performance in higher education, in the military, and in the work force Eliminating the SATs would have negative consequences. If the University did not require SAT scores from prospective students, they would have to raise their standard high school GPA to unrealistic expectations just to balance out the admissions process. NON-DISCRIMINATORY 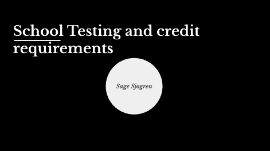 Transcript: School Testing and credit requirements Sage Sjogren Issue Students are required to have 24 credits and pass state testing to graduate. This means kids can't risk failing a class or even not passing the state tests. I think state testing shouldn't be apart of being able to graduate or not and there credits be reduced to 21. Current Law My Bill The current Washington state law requires that students graduating in 2021 or later need to have 24 credits, need to take state test such as the SAT, ACT, SBA, ASVAB, and take two years of a foreign language. https://www.k12.wa.us/student-success/graduation/graduation-requirements Current Law Amendments 1) State testing shouldn't be required, colleges should recommend and encourage it but shouldn't be required for a diploma 2) 24 credits puts diplomas at risk for the reason that students wont be aloud to fail a single class. That doesn't mean that I am okay with students failing a class, it gives some wiggle room for the struggling students with many unknown reasons. Credits should be kept at 21 as was the 2019 and 2020 class https://www.k12.wa.us/student-success/graduation/graduation-requirements/credit-requirements My Bill People who are affected All states All students in high school Consequences If a school were to force students to take the state testing or held a diploma because a student didn't pass all their classes then the school district would be charged with First time offense- $500 Second offense- $1,000 Third offense- $5,000 or permanent closure of said school Affect & Consequences Affect & Consequences Since the graduating classes later than 2020 are required to have 24 credits and attempt at all state tests, my law would go into affect over the summer of 2020 meaning that 2021 graduates and later will only need 21 credits and don't need to take state tests When my law would go into affect Timeline 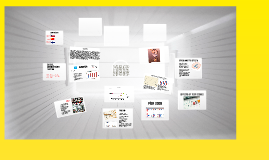 Transcript: Testing has it’s advantages but the negatives far outweigh the positive. Testing constantly induces stress in children and teens, and stress is known to cause health problems even ones that could last a lifetime in those still young. Our American school testing policy has become flawed and obsessed with the numbers we believe are qualitative. This emphasis on testing has been in place for almost 100 years but the number of tests and the high stakes of them has risen over the past few decades. The times that our parents talked about rolling out of bed to take the ACT are over and a stressful environment has taken its place. Stress is good for the body in small doses but prolonged over the years it can cause serious damage. Students are reportedly more stressed than ever and schools are calling for a change with some even boycotting tests and refusing to administer them. So is time for change? Some people say there should just one big one that would reduce stress. It wouldn’t. Chinese kids have reported higher levels of cortisol than before the Gaokao was introduced and the number admitted to college proportionally has dropped. A system like Finland’s would be the goal. One test that has no determining factor and the children’s ability and intelligence is measured in their quality of work. This being said, it would take years of reform and and a change in learning values. The real change can be actually subtle and thats changing our emphasis on the numbers these tests spit out and looking at each child and teen having different talents. School Standardized testing -Students take one big test called the Gaokao Finland Conclusion -45,000 schools are failing Finland America -High-stakes testing in school systems have been shown to narrow the curriculum and to lower the depth of what is being taught to all students across the board. Learning is being sacrificed for the sake of raising student’s test scores and causing the environment of the classroom to be hostile to slower learners. Teachers gear their lessons toward the specific upcoming test, and students feel the pressure from college admittance tests like the ACT and SAT in the American school system. Our presentation will cover how these tests and other high level assessment tests have affected the school district’s ability and student’s stress levels and how stress plays an important role in health and learning as well as a comparison to Finland and China’s testing policy. -One required Standardized test -Students will spend hours everyday for 4 years studying -Goes to school the least time China -Schools are cutting non-tested curriculum -From grades 1-10 student will take 40 standardized tests (Hippocampus) AMerica Stress and it's effects -Stress can cause selective brain atrophy when over stressed with information -Tests decide placement in gifted or remedial classes -poor schools are trying to force out low performing students Gaokao Test score create negative effects -Brain tries to forget information when under stress How does the emphasis society puts on school standardized testing affect stress levels in students? Introduction pisa 2009 -high stakes test caused lower fifth to be 1/4 more likely to drop out China Comparison -Students will hook themselves up to iv bags for study marathons -poorer schools lose the arts due to scores -Stress causes the hippocampus to release glucocorticoids, known as cortisol, in an over amount causing hippocampus damage Effects of test scores -stress can also cause anxiety disorder, coronary disease, and obesity. -Does not believe tests measure intelligence or ability -Placed 6th in math, 2nd in science, and 3rd in reading internationally -Students are reporting feeling more stressed than ever before 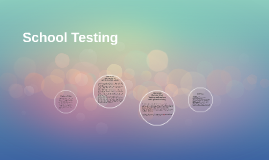 Transcript: Students get anxiety over tests which develops from the fear of alienation from parents, family, and friends due to poor grades. Standardized testing evaluates a student's performance on one particular day and does not take into account external factors Standardized testing causes teachers to "teach to the test" rather than teaching kids to use in real world and in there adult life School testing only shows the individual performance of the student instead of the students overall performance throughout the year Also, not only do the students receive an enormous amount of stress to perform good on the test, but so do the teachers because of the stress on having to prepare the students and if the students happen to do bad on the test they may feel that it was there fault for not teaching the students thoroughly enough Problem / Issue Standardized tests are not reliable and cause students to feel pressured and gain anxiety. In a 2001 study, it was found that over a years time 50 percent and 80 percent of the improvement of a schools testing from one year to the next were temporary. Indicating that just during those test times students seemed to get lower scores. As of May 26, 2011, the National Research Council did a report on school testing and found no evidence that the test-based incentive programs are working. Overall, our school systems are teaching students how to pass tests and "Teaching to Test" rather than teaching students to be productive in their adult lives. As well as, a test cannot measure... creativity, critical thinking, persistence, honesty, courage, leadership, motivation, resourcefulness and so many other traits that cannot be written on paper. Factors on why we should get rid of school testing www.nap.edu http://www.edweek.org/ew/articles/2001/05/23/37brookings.h20.html https://www.wsj.com/articles/SB10001424052748703766704576008692493038646 https://www.washingtonpost.com/blogs/answer-sheet/post/the-myths-of-standardized-testing/2011/04/14/AFNxTggD_blog.html https://www.thoughtco.com/examining-the-pros-and-cons-of-standardized-testing-3194596 http://www.npr.org/sections/ed/2015/01/06/371659141/what-schools-could-use-instead-of-standardized-tests Sources This law would require all states to take away any standardized testing such as aptitude tests, college-admission tests, IQ tests, and international-comparison tests. It would be replaced with growth testing, that will be tested at the beginning, middle, and end of the school year to only show the growth the child has made and to not be used for grading or acceptance purposes. This law would affect all kindergarten to 12th grade students and would take effect January 1, 2018. School Testing Take away Standardized Testing and replace with growth testing 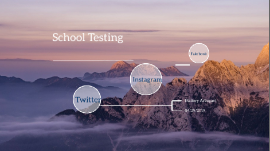