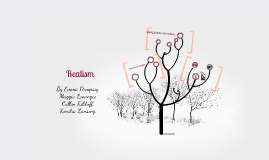 Transcript: By Emma Dempsey Maggie Levangie Cullen Kilduff Kendra Lansing The Origins of Realism Characteristics of Realism In the mid 19th century industrialization had changed the point of view on art and other cultural aspects. The romantic dreams seemed inevitable, and there was a direct shift to realism. Artists and writers wanted to show people exactly how life really was for the poor and working. Instead of focusing on their most desirable form of society, they were direct and depicted the filthiness and poverty of the working world. Modern World History Textbook thinkexist.com goodreads.com brainyquote.com askart.com artquotes.net tendreams.org The popular form of literature and visual art of the middle 19th century. The goal of this cultural movement was to show life exactly how is, and not what it should be. Going further into realism... Paintings showed the importance of the working class during the 1850's. The paintings depicted the crowded and dirty lives of these citizens. The novel's focused on describing the workers suffering, and science was deticated to observing and reporting facts. What is Realism? Ex: “It was the best of times, it was the worst of times, it was the age of wisdom, it was the age of foolishness . . . it was the spring of hope, it was the winter of despair . . . in short, the period was so far like the present period . . . .” Art - Charles Dickens Understanding Realism What is the purpose of realism? “Civilization will not attain to its perfection until the last stone from the last church falls on the last priest.” ― Émile Zola Works Cited Realism Realistic Literature "Equality may perhaps be a right, but no power on earth can ever turn it into a fact." Honore de Balzac 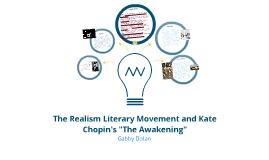 Transcript: The literary movement following romanticism was termed realism or verisimilitude. This period in literature was characterized by novels with an accurate portrayal of middle-class life. Realism was caused by an interest in science, documentation of history, and rational philosophies. A depression in the US began in 1893 so the literature from this period was not ultimately happy or fairy-tale like. Novels from the realism period are very true, uncut depictions of average reality without fake endings or added twists. Characters in realism were plausible, not dramatic or satirical but believable humans.What was written is normally what truly happened. "The Awakening" Kate Chopin assists in identifying the literary movement of realism in "The Awakening" by focusing on characters rather than plot, keeping things accurate, and telling a realistic story in a gimmick-free, matter-of-fact manner. Kate Chopin Realism Thesis Bee, Amber. "Kate Chopin: Writing Style." Mibba.com. Mibba, 2009. Web. 27 Sept. 2012. <http://www.mibba.com/Articles/Biographies/1849/Kate-Chopin-Writing-Style/>. Campbell, Donna M. "Realism in American Literature, 1860-1890." Literary Movements. Dept. of English, Washington State University. 8 September 2011. Web. 27 September 2012. <http://public.wsu.edu/~campbelld/amlit/realism.htm>. Le Marquand, Jane. “Kate Chopin as Feminist: Subverting the French Androcentric Influence.” Deep South 2.3 (1996). 27 Sept. 2012. <http://www.otago.ac.nz/DeepSouth/vol2no3/chopin.html>. Koloski, Bernard. "Kate Chopin The Awakening." The Awakening, Kate Chopin, Characters, Setting, Questions. Kate Chopin International Society, 2004. Web. 28 Sept. 2012. <http://www.katechopin.org/the-awakening.shtml>. Matthaei, Julie, and Teresa Amott. "America at Work / America at Leisure, 1894-1915." America at Work / America at Leisure, 1894-1915. Library of Congress, 1996. Web. 27 Sept. 2012. <http://memory.loc.gov/ammem/awlhtml/awlwork.html>. Wyatt, Neal. "Biography of Kate Chopin." Biography of Kate Chopin. Virginia Commonwealth University, 1995. Web. 27 Sept. 2012. <http://www.vcu.edu/engweb/webtexts/hour/katebio.html>. "The Awakening", set in the late nineteenth century on Grand Isle, Louisiana and New Orleans is a story of feminism at the turn of the century and finding self empowerment as a woman. The setting greatly affects the theme of domesticity among women and French cultures in everyday life in "The Awakening". Chopin knew first-hand the dynamics of the South and used her knowledge to truly reflect the depictions of feminism and realistic actions of a woman during this time. Edna Pontellier's raw, natural struggle to find herself and reject societal norms is the main plot of "The Awakening". Because Chopin illustrates a character that is so much like herself she demonstrates perfectly the realism literary movement. The ending is not a gimmicky, happily-ever-after type of finale, which exemplifies even more the truth and reality of Chopin's work. Gabby Dolan Kate Chopin grew up in St. Louis Missouri surrounded by feminism, Catholicism, and death. Her sister died in infancy and her brothers passed away in their early twenties. The young's girl's father was killed in a train accident when she was just five and her mother, grandmother, and great-grandmother became her care-takers and role models is life. Admiring the strong women around her, Chopin began building morals of female empowerment and individuality in a male dominated world. The author attended the Sacred Heart Academy and began finding her strength in creative writing and artistic expression. More and more deaths were occurring in her life, and she started to doubt her Catholic background; this probably contributed to her seeing and relaying things for exactly how they were and no better. The Realism Literary Movement and Kate Chopin's "The Awakening" Works Cited 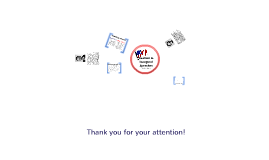 Transcript: Abraham Lincoln was the 16th President of the United States. He served from March 1861 until his assassination on April 14, 1865. He led his country through the American Civil War, a period of immense constitutional, military and moral conflict. As president, he successfully preserved the Union, ended slavery, and promoted economic and financial modernization in the US. Realist Period summary of texts Realism in Inaugural Speeches Modern Period Obama's speech is also romantic in that he is trying to adress a lot of issues of the country and improve the american moral by using idealistic rhetoric Both Obama and Lincoln were elected during times of difficulty, Obama during recession and Lincoln during the Civil War. Both speeches reflect a need for solidarity and patriotism, and promise better times ahead. They employ not realist styles, but romantic ones, meant to inspire more than inform. Both speeches plant seeds of hope for the American people. Connection Between the Texts Lincoln's (not so) Realist Text Lincoln & Obama At the time of Lincoln's speech, towards the end of the Civil War, most Americans felt disillusioned. Although realism was the most prevelent writing style of the time, Lincoln used romanticism to unite his war torn nation. Lincoln adressed the public as "we" and incorporated God and religion in his speech in order to inspire the nation as a whole and improve moral after the war. He uses thought provoking imagery to inspire the nation to rebuild and unite under divine favor. Lincoln is trying to pull together a war torn nation. He uses ramanticism rather than the prevelent realism of the time. Barack Hussein Obama was born August 4th 1961 in the state of Hawaii. He was elected the 44th president of the United States in 2008, during a serious economic recession. In his campaign he emphasized "hope" and "change" for the US. He promised to lower taxes, provide universal healthcare and unemployment insurance, stimulate the economy and lower the national debt. He is still in office and has high hopes for reelection in this year. Thank you for your attention! 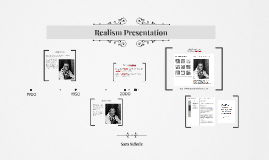 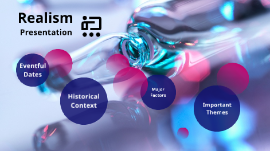 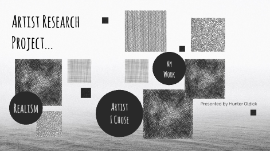 Transcript: Artist Research Project... Presented by Hunter Oldick Description: Realism Realism was created in hopes to portray real and typical contemporary people in different situations with truth and accuracy. Realists sought to expose the unpleasant and sordid aspects of life that the other art movements covered up. the work depicted all people of all social class in situations that arise in ordinary day to day life. Realism is primarily concerned with how things appear in the eye, rather than representations of the world. Popularity of this art movement started with the introductory of photography. Origin: Origin Realism was an artistic movement that followed Romanticism beginning in 1848 during what the French call the February Revolution. This revolution ended the July Monarchy and led to the creation of the French Second Republic. Artists and Examples Artists There were many artists within this movements including: Gustave Courbet ean-François Millet Honoré Daumier Jean-Baptiste-Camille Corot Courbet Gustave Courbet A French painter who led the Realism movement in 19th-century French painting. Committed to painting only what he could see, he rejected academic convention and the Romanticism of the previous generation of visual artists. Millet ean-François Millet A French painter and one of the founders of the Barbizon school in rural France. Millet is most noted for his scenes of peasant farmers Daumier Honoré Daumier A French printmaker, caricaturist, painter, and sculptor, whose many works offer commentary on social and political life in France. He produced more than 500 paintings, 4000 lithographs, 1000 wood engravings, 1000 drawings and 100 sculptures. Best known for his caricatures of political figures and satires on the behavior of his countrymen Corot Jean-Baptiste-Camille Corot a French landscape and portrait painter as well as a printmaker in etching. He is a pivotal figure in landscape painting Gustave Courbet Artist I Chose Born in the early 1800s Courbet had influences within his work such as a writing of Victor Hugo and a Lélia illustrating George Sand. Courbet practiced still life paintings and this is the concept I would like to follow as I create my own sketch. My Work My Drawing: Real Picture: 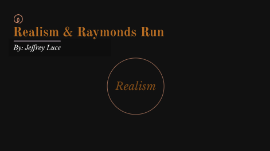 Transcript: Realism & Raymonds Run By: Jeffrey Luce Realism Realism American realism was a style in art, music and literature that depicted contemporary social realities and the lives and everyday activities of ordinary people. The movement began in literature in the mid-19th century, and became an important tendency in visual art in the early 20th century. Raymonds Run Raymonds Run In Raymonds Run a girl everyone calls Squeaky takes care of her handicapped older brother Raymond. This can easily can happen in real life i've seen it before with my friend and his blind mother. Throughout the story you find out that Squeaky has a room full of trophies and ribbions from winning. This can also be seen in the real world with anyone who likes to be in events and wins. By the end of the story Squeaky starts to see eye to eye with her former rival Gretchen who she believes can help her older brother become a great runner. This is something that happens very little in life, bu tit happens all the same. Conclusion Conclusion Realism seems to be seen less and less throughtout the years, but many authors still use it they are just a little harder to find. Realism is meant to show real life struggles in a story which most of the time are fantasy.