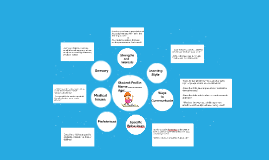 Transcript: Sensory Preferences -Does he learn by seeing, listening or having a hands on opportunity? -What is the best way to provide feedback on the child’s work? Learning Style Does the child have specific students/friends he likes or dislikes? Specific Behaviours Are there specific behaviours to be aware of such as a tendency for the child to run away, or toileting issues? How the child can be calmed if upset, etc? Are there specific medical issues that are important to reference such as epilepsy, allergies, etc.? Does you child take medication and will it need to be given by the service provider? Medical Issues Strengths and Interests -Does he use picture symbols, photographs, sign language, words, or a combination? -Does the child have a special communication device he uses? -Does the child ask for what he wants or needs and how? -What are the ways your child expresses emotions such as joy, sadness, being upset? Does your child have sensory sensitivities; either over or under-sensitive to sound, light, textures, smells or tastes? Does the child have a special interest that could motivate him/her in the learning process or that should be avoided because he/she perseveres on the interest? Ways to Communicate Student Profile: Name:_________ Age:____ 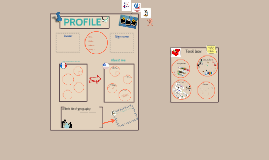 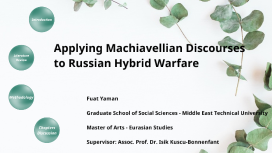 Transcript: Applying Machiavellian Discourses to Russian Hybrid Warfare Fuat Yaman Graduate School of Social Sciences - Middle East Technical University Master of Arts - Eurasian Studies Supervisor: Assoc. Prof. Dr. Isik Kuscu-Bonnenfant Research Topic Hybrid Warfare: Understanding Russian Hybrid Warfare in a Theoretical Concept Introduction Underlying necessities related to the implementation of hybrid warfare concept by the Russian Federation within the conceptual framework of Niccolò Machiavelli's political philosophy. Research Question -What are the specific circumstances that have necessitated the Russian Federation to adopt hybrid warfare concept as a military doctrine and how can this be evaluated theoretically? Research Question Thesis Statement Russian adoption of hybrid warfare concept is an outcome of certain necessities and this can be assessed within the framework of Machiavelli's realist political philosophy. Thesis Statement Objectives To find out the specific motivations for the Russian Federation to adopt hybrid strategies. Objectives To bring out a theoretical connection between Russian perspectives on the hybrid warfare concept and Machiavelli's strict realist approach to political philosophy. Literature Review As a result of its nature, hybrid warfare contains various parties and, obscures the lines between versatile means of warfare and also between peace and war. (Wither, 2016) Literature Review The Russian view of modern warfare is based on the idea that the main battle-space is the mind, and as a result, new-generation wars are to be dominated by information and psychological warfare. (Berzins, 2014) Threats that incorporate a full range of different modes of warfare including conventional capabilities, irregular tactics and formations, terrorists acts including indiscriminate violence and coercion, and criminal disorder, conducted by both sides and a variety of non-state actors. (Hoffman, 2007) The very 'rules of war' have changed. The role of non-military means of achieving political and strategic goals has grown, and, in many cases, they have exceeded the power of force of weapons in their effectiveness. (Gerasimov, 2013) For politics, Machiavellian thought, at least in its most challenging form, is quite different; the idea is that it is sometimes legitimate for political rulers, precisely because they are rulers, to deceive, cheat, betray or even torture and murder, where these acts are clear violations of the moral code that seems to bind us all. (Warburton, Pike, and Matravers, 2000) Methodology Methodology Descriptive Research Design Use of Qualitative Content Analysis Method Secondary Research - such as reviewing available literature and/or data. Data including books, articles, journals, scholarly reports, official documents of the Russian state institutions for textual analysis. The Political Philosophy of Machiavelli Chapters Discussion 1469-1527 The Path to Hybrid Warfare in Post-Soviet Russian Strategic Thinking Post-Soviet Russian Perspectives and Necessity of Hybrid Warfare -Dissolution of the USSR and the Putin Effect -Russian Experience in the Chechen Wars: Asymmetrical Means and Forms -The Color Revolutions and The Arab Spring: New Information Technologies and Social Media Preliminary Cases of Russian Hybrid Conduct Special Operation Forces (SOF) Private Military Companies (PMCs) Information Warfare (IW) Government Organized Non-Governmental Organizations (GONGOs) Russian Orthodox Church (ROC) Thank you for your attention! Title Title Title Title Title Maskirovka Reflexive Control Theory The Gerasimov Doctrine Virtù Necessità Raison d'etat