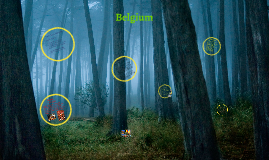 Transcript: Originally the french people in Belgium are called Walloon and Dutch are called Flemish. Flemish is used by 58% of the population, Walloon is 31% and German and others is 11% The official languages of Belgium are Walloon, Flemish and German. Famous Landmarks Gentse Festeen: is a 10-day music and theatre celebration in July and is the third largest festival in all of Europe. Christmas: Christmas starts off with the feast of saint Nicholas which is on December 6th. On the eve of Christmas, families gather in their homes for a meal with a serving of the La Buche de Noel, And on Christmas Day Belgians go to church with their families and continue their celebrations together with their friends the whole day. New years Eve: parties are thrown and at twelve everyone kisses, wishes good fortune and toasts. On New Year’s Day children read greetings and wishes for a good year to their parents and godparents. Antwerp:Known for its vibrant nightlife, bars, restaurants and numerous festivals. Spa: the city of Spa, a Belgian town referred to “Pearl of the Ardennes,” is in a wooded valley surrounded by rolling hills and countless rivers and springs. Having given its name to all spas, visitors from across Europe have traveled to Spa for its healing hot spring water treatments since the 14th century. Cinquantenaire Arch: The Cinquantenaire Arch is a sculpture anchoring the large park in Brussels known as arc du Cinquantenaire or Jubelpark. Runners-Up: is Belgium's largest Gothic-style cathedral, with seven naves and several outstanding pieces of art by the Belgian master painter Rubens. Capital: Brussels Location: Western Europe, bordering France 620 km, Germany 167 km, Luxembourg 148 km, Netherlands 450 km Area:11,780 square miles (30,510 square kilometers) Belgium chocolate is referred to Pralines; Pralines are made from nuts and sugar syrup, whether in whole pieces or a ground powder. They consist of a hard chocolate shell with a softer filling inside. Belgian Society Belgium For buisness meetings men should wear suits with black ties and women should wear suits, dresses or skirts and blouses. Most Belgians live in the same town they grew up in. Men are expected to stand when a women enters the room. and also on a public transportation (city bus) until the women is seated. if dining with company the hosts sit on opposite sides of the table, never together. when you are meeting or greeting someone you would shake hands with everyone present, this is mostly during a buisness or social event. when invited to someones home bring flowers for the hostess, it is also appriciated to bring a small gift or candy for children. (if they have any) Get to know Belgium Belgian Chocolate Languages Holidays/Festivals The End!