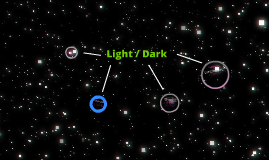 Transcript: Pg. 45 "The lights grow brighter as the earth lurches away from the sun" Exhibitionism: extravagant behavior that is intended to attract attention to oneself. Voyeurism: a person who enjoys watching Daisy's light grows brighter as the sun goes down The moon is always shining on Gatsby's house Ch 7 "He put his hands in his coat packets and turned back eagerly to his scrutiny of the house, as though my presence marred the sacredness of the vigil. So I walked away and left him standing there in the moonlight-watching over nothing" Buchanan's are exhibitionists Gatsby and Nick are Voyeurists Ch 1 "Inside the crimson room bloomed with light" Ch 2 "I wanted to get out... each time I tried to go I became entangled in some wild strident argument which pulled me back..." Ch 7 Fried chicken scene Gatsby and Nick are always outside Tom and Daisy are always inside Night and Day Ch 5 "Two o'clock and the whole corner of the peninsula was blazing with light... Gatsby's house lit from tower to cellar" Light / Dark Inside and Outside Voyeurism vs. Exhibitionism The scene of Gatsby's house after Daisy Most of the time, the outside is dark Rooms or houses are always bright Ch8 "She was feeling the pressure of the outside world" Ch 2 "the apartment was full of cheerful sun" 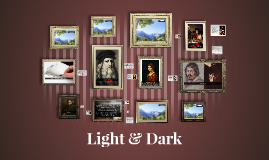 Transcript: He used very dark shadows that would blend into very dark backgrounds. He also used very little “grey area”. The contrast was mostly a harsh clash between dark and light values. Caravaggio’s lighting style was inspired by his tragic life. He has murdered someone in his lifetime, and reflected his feelings through dark and intense pieces. Caravaggio lit his scenes with dramatic lighting coming from a shaft of light emanating from a constricted (and often unseen) source. In Caravaggio’s work, the light areas held the most detail while the dark areas contained subtle detail and little interest. He developed a technique called tenebrism which would affect the style of the entire baroque period. Like Chiaroscuro, tenebrism exaggerates the light and dark values within a piece. Rembrandt All three artists, masters of light and dark, made valuable contributions of different lighting techniques to their eras. Da Vinci contributed Chiaroscuro, Caravaggio contributed tenebrism, and Rembrandt shared the Rembrandt Technique. All three of these artists were very influential upon each other and inspirational for artists of the future. It was these three artists among many others that influenced and brought ground breaking discoveries about light and dark values to the art world Born: July 15, 1606, Leiden, Netherlands Under the influence of Caravaggio as a fellow Baroque artist from Holland and Flanders, Rembrandt van Rijn practiced and perfected tenebrism and chiaroscuro. He used these lighting techniques to achieve dramatic intensity, rhythmic visual harmony, and psychological depth within a piece. Rembrandt created moods of gloom or enthusiasm through light alone. He took an expressive approach to light and dark. He used dark shadows in the faces of his subjects to identify lines and crevices. The deep shading in the face can set the nature of the subject’s thoughts. Rembrandt painted light differently from other traditional Dutch artists. His shadows tended to pick off of the background and his light was not lighting obscure space; it underlined details and hid others in half light. He was also known as a master of light and dark. Rembrandt used light and shadow to create ultimate realism. It is because of this that critics may argue that Rembrandt preferred ugliness to beauty. Like his fellow light and dark masters, Rembrandt had a signature lighting technique that he created called the Rembrandt Technique. The less laminated side of the face would have a “triangle” of light. INTRO ABOUT The light focuses mainly on three figures. Captain Cocq, the Lieutenant, and the small girl. The other figures are overlapped in shadow. This can also show depth. The shadow figures have darker clothes to bring out the light on the areas of emphasis, aka Captain Cocq. The Rembrandt Technique is used on the Captain’s face. Only St. Peter’s face is illuminated. The other faces that are not as relevant to the piece as Peter’s are hidden in shadow. A spotlight effect focuses on St. Peter which amplifies the use of tenebrism, as well as the near black background. Supper at Emmaus Cast shadows show Caravaggio’s use of tenebrism as well as the stage lighting. MONA LISA The light source comes from a window which shows harsh shadows. In this piece, it is very clear to see Leonardo’s range of values go from black, to colour, to white. The dark background also enhances the figure in the piece. BENOIS MADONNA Born: September 29, 1571, Milan, Italy Da Vinci’s innovation and talent spread forwards into the Baroque era where Michelangelo Merisi, also known as Caravaggio, was the leading artist. Caravaggio’s lighting techniques are reminiscent of the Renaissance and Mannerist eras. Light and Dark add realism to a piece NIGHT WATCH Caravaggio OLD MAN IN RED Light & Dark Born: April 15, 1452, Vinci, Italy His great knowledge in math and science tied in with and expanded his knowledge of light and darks in art. He was inspired by the works of art from Greco-Roman artists, and developed a technique called Chiaroscuro which is the exaggeration of light and dark values within a piece. “Clothe your subjects lightly, as dark clothes will mix with the dark shadows, and they will be lost.” His focus in his paintings was not on colour, but on a range of values. His range went from darkest blacks, to the base colour tone, to near white CONCLUSION ABOUT Portrait of a Lady The dramatic lighting and range of values really enhance the figure The dark background blends into the shadows of the figure. Here Rembrandt uses light and dark to create crevices in his face to show age. The dim light source used can reflect the man’s thoughts. Perhaps he is reflecting on something. The Rembrandt Technique is also used on his face. RETURN OF THE PRODIGAL SON Harsh values enhance the focus of the piece, which is the figure of the woman. The dark clothes and hair against the light background is another great example of his use of chiaroscuro within the piece. Da Vinci developed 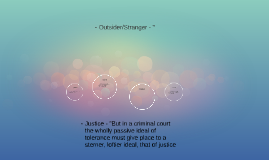 Transcript: "Is my client on trial for having buried his mother, or for killing a man?" (page 121) When evening sounds were creeping up from all the floors of the prison in a sort of stealthy procession. (page 101) Light/Dark "The two police man led me into a small room the smelled of darkness." (page 102) Sound Death Justice - "But in a criminal court the wholly passive ideal of tolerance must give place to a sterner, loftier ideal, that of justice Freedom Outsider/Stranger - " 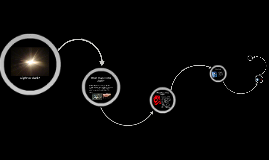 Transcript: What lives in the dark? Many animals live only in the dark. These include cave crayfish, eyeless fish, and eyeless crayfish. They often have no skin color and no eyes. There is no such thing as darkness, only the absence of light The sun is a quite small star, comparatively The light from the moon is reflected from the sun It is fast, so fast that if it went faster it would not exist. It can be invisible or visible. It is made of electro-magnetic radiation. Fun Facts What lives in the light? In Greek mythology, Artemis is the goddess of the moon If you are in total darkness for more than three days, you can become totally blind Light or dark? Dark Facts I know that a lot of you are going to go," Well, duh! Everything lives in the light!" Well, there are a few living things that need light for more reasons then others. Plants, for instance. Without sunlight, they would not be able to make their energy or food, thus them dying! Light Facts 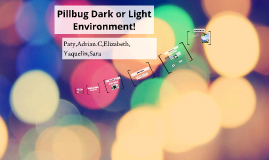 Transcript: Conclusion Choice Chambers, Filter Paper,12 Pill bugs, Foil, Timer Materials Procedures Hypothesis Paty,Adrian.C,Elizabeth, Yaquelin,Sara What do pill bugs prefer Light or Dark environments? Graph We predict pill bugs prefer dark areas better than light environments If you put pill bugs in light or dark areas, than they will prefer Dark environments. The purpose of this experiment is to determine whether pill bugs prefer light or dark environments. Question? Pillbug Dark or Light Environment! We concluded that pillbugs like dark places because if they feel disturb they curl up in a dark ball 1.Collect 12 pillbugs 2.Take out the adults from the group of pillbugs that you have. 3.Get the Choice Chambers and your foil. 4.Cover one side with the foil so it can be a dark side and light side. 5.Put your 12 pillbugs in the center of the choice chambers. 6.Observe your pillbugs for ten minutes, then every thirty seconds write down your data. 7.Take pillbugs out choice chambers. 8. clean up station and then let your pillbugs out in the wild. Objective Results Claim 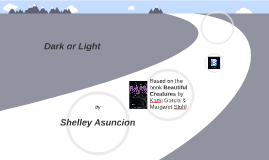 Transcript: By Shelley Asuncion Based on the book Beautiful Creatures by Kami Garcia & Margaret Stohl Dark or Light 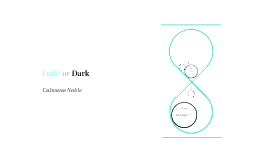 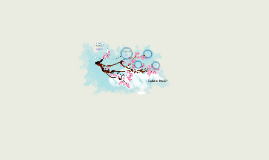