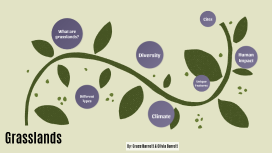 Transcript: Grasslands By: Grace Barnett & Olivia Barrett What are grasslands? -made up of large open areas of grasses - primarily occur in interior of continents - too moist too be a desert, and too dry to be a forest -maintained by grazing animals and frequent fires What are grasslands? Coteau Des Prairies Coteau des Prairies -approximately 200 miles in length and 100 miles in width -Eastern South Dakota Types of Grasslands: 1. Tropical (savanna) 2. Cold (arctic tundra) 3. Temperate (prairie) Different Types Tropical Grasslands: aka: Savanna cover almost 1/2 of Africa Most important factor= Climate Found in warm and hot climates annual rainfall= 50.8 to 127 cm (20-50 inches) per year climatic, edaphic, derived savannas tropical Pictures Arctic tundra coldest of all biomes frost-molded landscapes, extremely low temperatures, little precipitation, poor nutrients, and short growing seasons Average winter temperature= -34° C (-30° F) Average summer temperature= 3-12° C (37-54° F) wide variety of plants that grow here (1,700) over 400 types of flowers cold pictures Temperate characterized as having grasses as the dominant vegetation trees and large shrubs are absent hot summers & cold winters prone to seasonal drought and occasional fires Prairies are grasslands with tall grasses steppes are grasslands with short grasses. temperate Pictures Diversity Diversity - each grassland has its own diversity of species - some examples are: Tanzania's Serengeti Plain -grasses are subject to heavy foraging by about 3 million individuals of twenty-seven species -wildebeest -zebra - Thomson's gazelle - buffalo - topi Serengeti Plain Serengeti Plain Pampas, Argentina Pampas, Argentina -inhabited by a limited number of indigenous animals - birds - rheas and oven bird - native mammels - mara - the plains viscacha -the guanaco - Pampas deer Pampas, Argentina The Great Plains The Great Plains -account for one quarter of the continent's land area -Plant and animal types vary by location and climate - dominant plant life in the Great Plains is grasses -common animals - American bison - prairie dogs - jackrabbits - coyotes -Pronghorn sheep - rattlesnakes The Great Plains The Great Plains Climate Semi-arid climate Rainfall and soils insufficient to support significant tree growth Most common at mid-latitudes and near the interiors of continents climate is determined on what type of grassland it is (tropical, cold, temperate) Temperatures may change by as much as 30 °C from day to night Climate Unique features Unique Features - 25% of Earth - grassland biome on each continent except Antarctica - periodic fires -US makes efforts to restore grasslands - has only 2 seasons - growing season and dormant season American Prairie Reserve "Our mission is to create the largest nature reserve in the contiguous United States, a refuge for people and wildlife preserved forever as part of America’s heritage." American Prairie Reserve - providing resilient and rich habitats where animals can move and thrive - Collaborating with state and federal agencies - Partnering with ranching operations around the Reserve's edges to increase tolerance for wildlife Human Impact Human Impact - humans love the rich soil of grasslands - Most of the grasslands in the United States have been converted into fields -effected several species - monarch butterflies - disappearing as more and more grasslands have been converted into farmland - grasses - invasion of non-native species (13-30%) - San Joaquin kit fox - listed as endangered - fewer than 7,000 -pesticides and rodenticides Cites Cites https://www.nationalgeographic.org/encyclopedia/grassland-biome/#:~:text=Temperate%20grasslands%20are%20found%20in,or%20grazing%20land%20for%20cattle. https://www.ducks.org/conservation/waterfowl-habitat/biodiversity-in-the-grassland-biome https://www.britannica.com/science/tropical-grassland https://asknature.org/strategy/species-diversity-maintains-grasslands/ https://sciencing.com/great-north-america-animals-plants-6552490.html https://www.biologicaldiversity.org/programs/population_and_sustainability/species.html https://www.softschools.com/facts/biomes/grassland_biome_facts/165/#:~:text=They%20do%20not%20receive%20enough,a%20forest%20and%20a%20desert. https://www.americanprairie.org/wildlife-restoration 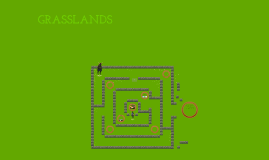 Transcript: Climate Growing Season Grasslands are found in every continent in the world except for Antarctica. Most Grasslands are found in between deserts and forests. The most famous or well known Grasslands are found in China. They are The Hulunbuir Grassland (115°31′126°04′E and 47°05′53°20'N), The Xilingol Grassland ( 111°59′E and 120°E and 42°32′N and 46°41′N), The Qilian Mountain Grassland (37°23' - 38°12'N and 101°59' - 103°23'E), The Ordos Grassland (40° 58′ N and 110° 00′ E), The Narat Grassland (43° 16' 35" N and 84° 05' 42" E) , and The Sangke Grassland (35°12' 20.50" N and 102°31' 27.42" E). Dormant Season Works Cited Grasslands The Sangke Grassland. During the winter the temperature can get as low as -40°. During the summer the temperature can get as high as 70°F. There are two seasons, a growing season, and a dormant season. The growing season is when it's not as cold and plants can grow. The dormant season is when it's too cold and nothing can grow. The average amount of rain in the Grasslands is 10-30 inches of rain per year. The Grasslands are typically very dry so not many trees grow there because the grass is taking up all of the water. Redone Version By. Alejandro GRASSLANDS Location environment.nationalgeographic.com chinahighlights.com/travelguide/grasslands blueplanetbiomes.org/grasslands plantbiology.northwestern.edu/people/students/images/CoreyUpdatedPhoto1.jpg geolocation.ws 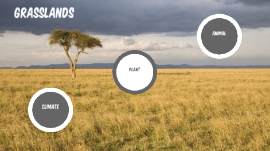 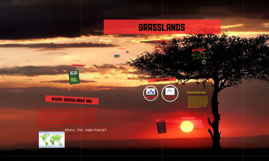 Transcript: Grassland Climoatograph Bibliography Grasslands are made up of grass (obviously hence the name), bushes and trees. Pangolin live in Savanna Grasslands. Pangolins are covered in scales that camouflage and protect them from bigger predators, if they feel threatened then they will curl up into a ball. There are 8 species of Pangolin. Pangolin eat bugs, ants and termites. They use their long tongue to eat them. They do not have teeth because they do not need to chew their food because their stomachs have the ability to digest and chew the food for them because their stomachs are very strong. They stay by themselves and usually stay awake during the night. The importance to have different biomes is so that different plants and animals have the chance to survive. Because some plants and animals are only able to survive in some conditions. Temperate grassland have needle grass, blue grama, buffelo grass and galleta. Grass from temperate grasslands get destroyed or will be not able to thrive properly if they have problems like getting eaten by many grassing animals, getting burnt from a fire or drying up from a drought. Umbrella Thorne is a very well known African Grassland tree. Umbrella Thorne Acacia grow in areas that have a yearly rain averaging of 4cm. Umbrella Thorne put up with 50° degree heat and freezing temperatures. Umbrella Thorne have grey to green colored leaves. Umbrella Thorne have thornes of various sizes that harden as they get old. The gum that is produced by the tree is eatable by humans we nickname it the "poor mans gum." Umbrella Thorne leaves, pods and flowers are eaten by many animals. Seeds inside the pods can be consumed by animals then the seeds pass naturally in droppings them are replanted in the soil. Characteristics Polar lands can have temperatures ranging from 5 degrees to -50 degrees Celsius. This is very different to Grasslands because Grasslands like the Savanna can go to 50 degrees celcius and drop low at night this is very different to the freezing conditions in Polar Lands. Polar lands are at the top and the bottom of the earth where the sun doesn't hit it as much as the Grass lands who are below and on top of the equator. Which gives polar lands at the top of the earth only a summer and a winter and a summer that can be very dark Flora In Grasslands Where grasslands are Grasslands have many different types of grass. Savanna Grasslands have many types of grass such as Rhode Grass, Red Oats, Star Grass and Lemon Grass. Savannas flora can get very dry in the dry season. Therefore the Savanna grasslands catch on fure very easy. The Savanna Flora get very familier with the situation so the plants have evolved. The trees have grown thick bark that allows the water storage stay in the trunk. The grass have grown longer roots that reach the water source underground and have the ability to regrow fast after fires. Harrier are a type of bird of prey. They fly low over open areas in grasslands to hunt for small prey. They are in the same group as hawks. They hunt usually during the day rather than night. They have their nest protected near tall grasses or bushes. Grassland and Polar Lands Lions live in Grasslands where you can hear their loud roar from 5.5 km away. Lions are not hunted by any other animals which make them at the top of the food chain. Lions eat many big mammals like Zebra's, Wilde beasts, Warthogs and even animals bigger than them like Hippo's. Giraffe's, Buffalo's, Elephants and many other animals. They spend most of their time sleeping in a Pride (a group of lions) where they all hunt together. A Pride usually has between 12-40 lions. Lions in the wild usually live the age of 15. Hollenstein-Kraftwerk Climate Graph Polar Lands and Grasslands fauna Of Grasslands Grasslands There is grasslands on every continent except Antarctica. Some of the countries you can find grasslands in are North Africa, South Africa, China, Australia, India, Southern Brazil Botswana, Namibia, Kenya and many more countries.There are many different names for the many types of grasslands. In South America they called their grasslands Pampas, North America call theirs Prairies, Africa calls theirs Savannahs, Asia calls theirs Steppes and Australia calls theirs Grasslands. Grasslands are en forests and deserts. Infomation: Grasslands Flora <http://www.ecomare.nl/en/encyclopedia/organisms/plants/vegetations/grassland-flora/> Visited 21-8-15 By Drecomm Grassland Habitat<http://www.skyenimals.com/browse_habitat.cgi?habitat=grassland> Visited 18-8-15 Harrier <http://www.skyenimals.com/animal_index.cgi?animal=harrier&img=image3> Visited 23-8-15 Added by SkyeNicole - falcon Date Updated Fri Feb 7 20:25:05 2014 Lion <http://www.skyenimals.com/animal_index.cgi?animal=lion&img=image18> Visited on the 23-8-15 Added by JindoJeff - Cheetah Updated on Sun Mar 1 16:40:18 2015 Pangolin <http://www.skyenimals.com/animal_index.cgi?animal=pangolin&img=image2> Visited 23-8-15 Aurthor JindoJeff Last Updated Sat Jun 29