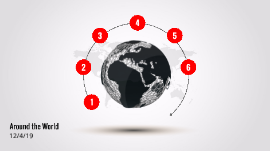 Transcript: 12/4/19 Around the World The Globe Theater 1 By: Ricoya Jordan & Diamonte Downing 2 What is the Globe Theater and Where is it Located? Globe Theater What is the Globe Theater? The Globe Theater was a famous building used plays that William Shakespeare was performed Location Where was the Globe Theater Located? The Globe Theater was located in London, England and was made in 1599 How was the Globe Theater Constructed? 3 The Globe was built using illegal timbers. Since the old playhouse was there last hope, they dismantled the building and kept the same auditorium shape for the new building What was the purpose of the Theater? Shakespeare built the Globe because it couldn't use the facility that James Burbage, who was the father of Richard Burbage, a leading actor had built in 1596. 4 Richard Burbage What are the different levels of the Globe for the audience? 5 The Globe contains 3 levels. Royalty- Queens And Kings The Nobles-Paid for better seats The lower Classes- paid 1 penny to get in. How did people know when plays were happening? Flags were put on top on the theater to notify people when plays were happening. They had different flags for different types of plays. Red Flag- History, blood involvement Black Flag-Tragedy, Death White Flag-Comdey 6 What happend to the Globe and Where can it be seen today? What did it cost to get in the theater? The lower classmen payed 1 penny to attend plays The nobles played 5 pennies The globe is now being used for acting companies in London 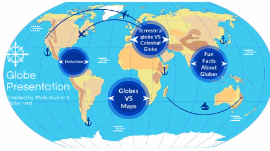 Transcript: Globe Presentation Created by: Molly Wymer & Abby Ford Globe Definition Definition -A globe is a picture of a planet drawn on a sphere. It is like a scale model of the planet. Globes VS Maps Globes VS Maps -The Earth is a sphere, a globe is a sphere, maps are flat. Maps are not the best option when looking at the Earth -Difference between map and globe. A map and a globe are very different. A map gives a 2-D presentation of certain regions in the world, a globe gives a 3-D presentation of the entire world. Pros Pros of using Globes most accurate representation of Earth The continents are the correct shape and size You can see the whole world No distortion Most accurate representation of Earth Cons of using a globe They are expensive to buy Hard to travel with No detailed information Only provides half of the world's view at once Cons -Maps are much easier to travel with compared to globes -They give bigger specifics -Maps do not use internet -Maps givea bigger picture Pros of using a map Pros of using Maps Is distorted and not correct Does not show whole world Cons Cons of using a map Terrestrial globe VS Celestial Globe Terrestrial and Celestial Globes Terrestrial- A terrestrial globe is a spherical model of the Earth that maps out the various continents and oceans. Celestial- Used to map the sky Terrestrial Globe Picture Terrestrial Globe Picture Celestial Globe Picture Celestial Globe Picture Fun Facts About Globes Fun Facts -Martin Behaim was the first to create a globe in 1492 -Most globes are mounted at 23.5° angle. - It is a common myth that Christopher Columbus discovered the fact that Earth is round. But the Ancient Greeks had figured that out centuries earlier. -The word "globe" comes from the Latin word globus, meaning round mass or sphere. More Fun Facts More Fun Facts! Last but not least! Ending Globe Slide Show THE END!!! 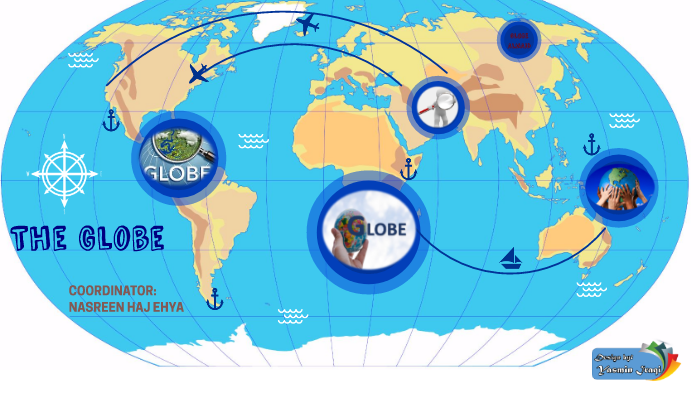 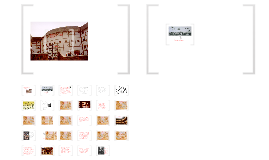 Transcript: A Guided Tour A Guided Tour This portrait appeared on the cover of the First Folio -- the first publication of his plays -- in 1623. Shakespeare’s Globe Theater STAIRS: Ascending to the first level from the PIT for theatergoers to reach the galleries. Between 1586 and 1588 William Shakespeare took up residence in London, England, leaving his family behind in Stratford. He had reached some level of prominence as an actor by 1592, when he became the subject of a scathing review by Richard Greene in a piece titled “A Groatsworth of Wit.” THE HEAVENS: Area above the stage with a trap door for lowering actors and props. Ceiling was painted with the signs of the zodiac. Shakespeare’s Globe Theater TRAP DOOR: Entryway into HELL, used for ghostly comings and goings. The floor of the PIT was typically covered with nut shells, the leavings of thousands of patrons who purchased the nuts and then just dropped the shells on the ground during the shows. STAGE DOORS: Doors opening into the TIRING HOUSE from the stage TIRING HOUSE DOOR: The rear entrance for actors and privileged spectators. THE HUTS: Storage area for pulleys and area for sound effects. The Globe Theater COMPANY SIGN: Sign identifying the theater and the acting company for the patrons. These are the GALLERIES. You could purchase a seat in them for two pennies and for a little extra could also rent a cushion to put on the wooden seats. DOORWAY: Entrance from hallway into the gallery. The Globe -- called “the Wooden O” by Shakespeare -- opened in 1599 with a performance of Henry V. What follows is a pictorial tour through Shakespeare’s Globe. ROYAL (PATRON’S) BOX: The special seating area for members of the royalty or for the patron of the acting company. INNER STAGE: A recessed playing area set off by a curtain which was opened for appropriate scenes In this view the paintings on the HEAVENS are clear. The overhang helped keep the actors dry during inclement weather. HALLWAY: Allows entry to the galleries HELL: The area under the stage used for ghostly comings and goings, appropriate scenes, and storage PIT: The area immediately around and below the stafe where the Grounglings stood to view the play. GALLERY: Seating for upper class patrons (2 cents) TIRING HOUSE: The backstage area which provided space for storage and business offices. An actor by trade, Shakespeare joined The Lord Chamberlain’s Men, a renowned acting company, in 1592. By 1599 the company needed a new playhouse after being forced out of their old one and so decided to become equal partners in a new venture -- the Globe Theater. WARDROBE: The storage area for costumes. Because of laws passed by the city fathers of London, no theaters could be built within the city itself. Therefore, The Globe, like the other theaters of the day, was constructed across the river Thames in Southwark. DRESSING ROOM: Rooms where the actors were attired and waited for cues. ENTRANCE: Main Entry to the theater where admission would be collected. During a performance of Henry VIII on June 29, 1613, an over-charged cannon misfired. The wading landed on the thatch roof, setting the theater ablaze, destroying the building Shakespeare had retired from only two years earlier. The PIT or the YARD is the area at the foot of the stage reserved for the Groundlings, each of whom paid a penny to see the play. In the PIT one would also find wine and fruit sellers mingling among the patrons. The Globe Theater Between the PIT and the GALLERIES, almost 3,000 people might cram into the Globe to watch a performance. Nowadays the rebuilt Globe holds 1,500 -- 1000 in the Galleries and another 500 in the Pit. BALCONY: Located above the stage, it housed musicians or spectators and was used for special scenes FLAG: Announcing the type of performance that day -- comedy, tragedy, or history. With the ascension of James I to the throne of England in 1603, Shakespeare’s company changed patrons -- becoming The King’s Men. The Globe continued to be the building in which the company’s plays were performed, even after William Shakespeare’s retirement in 1611. From the front the stage of the Globe was designed to look rather like the front of a building. In the center was the curtained entrance into the INNER STAGE. To either side you will see the entrances into the TIRING ROOMS, doorways used during the productions for entrances and exits by actors. For example, one side for Capulets and the other for Montagues. The BALCONY above was used by Shakespeare for special scenes (Romeo and Juliet, Act II, scene ii), for the musicians, or as seating for special play-goers. The stage floor stood approximately 5 feet above the floor of the pit, allowing the actors to use the area under the stage -- HELL -- for scenes involving graves (Hamlet), for ghostly appearances (the witches’ pot in Macbeth or the ghost in Hamlet), and for characters who must decend into Hell (Marlowe’s Dr. Faustus).