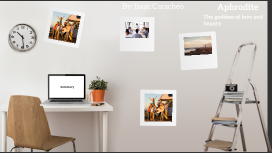 Transcript: By: Isaac Caracheo Aphrodite The goddess of love and beauty Aphrodite is extremely self-absorbed, jealous and self-centered. She likes to be recognized as the most beautiful being in the entire world. Aphrodite can blame you when she is angry. Aphrodite's characteristics Fun facts about Aphrodite -Aphrodite had many children with different men. -Aphrodite was often associated with several symbols. -She was one of the three contestants for the apple of Eris. -Aphrodite was the sculptor's favorite. -Aphrodite's depictions are perfectly symmetrical. Pictures of Aphrodite Aphrodite's enemies Aphrodite's enemies included Hera, Zeus wife Athena, Helios, and Artemis Aphrodite's enemies A myth of Aphrodite According to legend Paris, while he was still a shepherd was chosen by Zeus to determine which of three goddesses was the most beautiful. Rejecting bribes of kingly power from Hera and military might from Athena, he chose Aphrodite and accepted her bribe to help him win the most beautiful woman alive. Summary Summary Aphrodite has many enemies for many reasons.She was chosen on who was the most attractive according to Paris. She has many symbols that represent her. She always tries to make everything about herself. 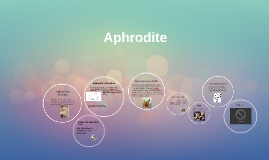 Transcript: Aphrodite's true parents are unknown, but the popular thought is that Zeus and Dione made Aphrodite. Where Did Aphrodite Live? Aphrodite's Powers Aphrodite was the goddess of beauty, love, pleasure, and sexual attractiveness. She had a power that made any man fall in love with her. In the story of the Argonauts, Hera, who sponsored Jason's quest, had requested Aphrodite to make the King of Colchis' daughter to fall in love with Jason and help capture the Golden Fleece from the grove where it hung. Aphrodite did so, and proved Jason's quest successful. Video Aphrodite is good. Aphrodite and Ares had a child named Aros, the god of love. Aphrodite's Relatives Aphrodite lived in Babylonian and Sumerian. In the Iliad Aphrodite promised Paris Helen the most beautiful women in the world. D Iliad The rest of her Children are irrelevant. Aphrodite is a good goddess even though she has done bad things with her son and his wife she just wanted what was best for her son and her family. Aphrodite's festival, Aphrodisiac was a way where many priestesses (a.k.a sacred prostitutes) who plied their trade upon the streets of Corinth. Also when they did their cults they were often naked. Myths involving Aphrodite Aphrodite's Cult Aphrodite Aphrodite had many affairs with plenty of different gods and mortals alike. 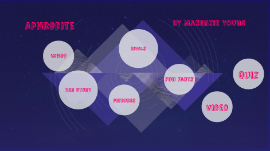 Transcript: Aphrodite By Makenzie Young Who? Love Beauty Who? Family Tree Family Tree 1st Story of Birth: Mother: Dione father: Zeus 2nd Story of Birth: She was born by Foam of the Sea c h i l d r e n Phobos (fear) Anteros (requited love) Eros (love) Adrestia (revenge) Himeros (lust) Harmonia (harmony) Deimos (dread Siblings: Hermes Ares Husbands: Hepaestus God of blacksmiths, sculptors, metallurgy Team Characteristics Attractive Fearsome Unfaithful weaker frightful Rivals!! Athena Hera ~Jelous of Beauty~ Rivals Aphrodite Was... Aphrodite was... Major Goddess She was an Olympian Her Story ~Ahprodite's Story~ Aphrodite was proved to cause the Trojan War. She wanted Paris to declare the she was the fairest of them all. To get him to declare that she promised him Helen. Helen though was already married to the king of sparta. So aphrodite helped paris take helen away to troy, causing the war against the greeks and the Trojans. Pictures Pictures Fun Facts FUn Facts Aphrodite was the model for the famous sculpture, Venus de Milo. #2 Fun Fact #2 Out of the 3 contenders; Aphrodite, hera, and athena, for the fairest of them all. THe winner got a golden apple. the winner was aphrodite. #3 Fun Fact #3 Aphrodite used a swan-drawn car to glide easily through air. #4 Fun Fact #4 She Symbolized: Dolphin Rose Scallop SHell myrtle dove Sparrow girdle mirror swan Video Video 1. Who was Aphrodite? 2. What are 2 characteristics about Aphrodite? Quiz Quiz goddess of Love and Beauty Attractive, fearsome, unfaithful, weaker, or frightful 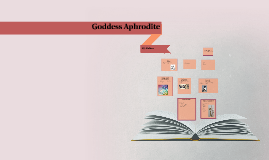 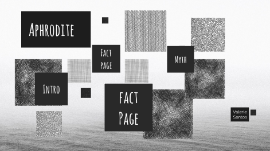 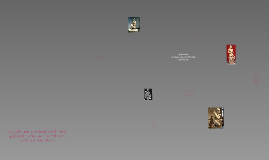 Transcript: Aphrodite: Goddess of Love, Beauty, and Desire Aphrodite was born when Cronus threw genitals into the ocean which began to churn and foam and arose Aphrodite. Aphrodite was born as an adult and pregnant. Some say that Eros was the child she was born pregnant with. Others say that Ares was the father. Zeus was afraid the gods would fight over Aphrodite's hand in marriage so he married her off to the smith god Hephaestus. Hephaestus made her beautiful jewels, but this was not wise for it made her too beautiful and she was too irresistable already. She was not content being married to him. Aphrodite was loved and loved many gods and mortals. Her most famous mortal love was Adonis. Ares Hermes Poseidon Zeus Dionysus Nerites Anchises Boutes Phaethon Divine Offspring: Anteros; Ares Beroe; Adonis Deimos; Ares Eros Harmonia; Ares Hermaphroditos; Hermes Himeros; twin bother of Eros Iakkhos; Dionysos Peitho Phobos; Ares Pothos; Erotes Priapos; Dionysos, Zeus, or Adonis Rhodos; Poseidon Mortal Offspring: Aeneas: Ankhises Astynoos: Phaethon Erxy: Argonaut Herophilos; Poseidon Lyros; Ankhises Aphrodite's attributes are the dolphin, dove, swan, pomegranate, and the lime tree. 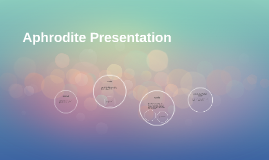 Transcript: Some of Aphrodite's traits are that she thought very high of herself and she was very deceptive. Symbols Aphrodite's symbol is a dove. Her symbol is the dove because it represents peace and love. Domain She caused the Trojan war. Just so she could win a beauty contest. Traits Power She was born all ready grown-up in sea foam. She is not in charge of a specific domain. Greek and Roman Name Her mother was Dione and her father was Zeus. She also had a husband named Hephaestus but they were not happily married. She had nine children. Her greek name was Aphrodite and her Roman name was Venus. Myths Aphrodite's power was love so she could make people fall in love. She could also make people more beautiful. Aphrodite Presentation Family 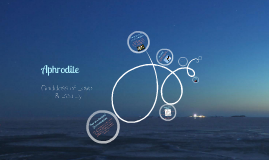 Transcript: Marriage! Doves Any children? When she arrived, Zeus quickly chose a husband for her; afraid the gods would fight over her. He chose Hephaestus, god of war. Dolphins How she was born. (second assumption) The young people of Greece would pray to Aphrodite and ask to bring them a loving spouse. She was known to have represented all things that were beautiful. Her presence made the world to be away from darkness and cold.. She inspired true and eternal love. Aphrodite Some of Aphrodites Symbols. Aphrodite How was she born? (first assumption) Aphrodite was said to have Girdle, a special power to make people fall in love Yes! Aphrodite has one son, by the name of Eros, (Or otherwise known as Cupid!) There are two different stories to how she was born. Many say she is the daughter of Zeus (king of all gods) and Dione (an early earth/mother goddess) Other stories suggest she was born from the foam of Uranus' severed body when he was thrown to the sea. Goddess of Love & Beauty , Why's she so important? Any Powers? Myrtle (flowers)