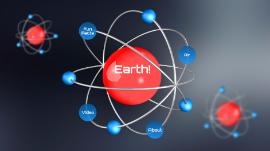 Transcript: Earth! Here are some facts about Earth: As you know, Earth is mostly blue with a third of it brown. Earth orbits the sun at 67,000 mph, almost 1030 times the speed of a car on the highway! Earth is the 3rd farthest planet from the sun. Earth-our home About The Earth is 7918 miles in diameter. 70% of earth is water. Of course, one Earth day is 24 hours and one Earth year is, well, one Earth year (365.25 days). Earth has four layers- the inner core , outer core, mantle and crust. Info- continued The Earth is 7918 miles in diameter. 70% of earth ... Earth's moon has been named "Luna" by the romans and "Selene" by the Greeks. Our moon is the fifth largest natural satilite. Fun Fact: Earth's moon can fit inside Earth 49 times! Earth's moon Earth's moon The average temp. on Earth is 61 degrees fahrenheit. Earth's atmospheric composition is as follows: 20.95% Oxygen, 78.08% nitrogen, and 0.98% argon with other trace gasses. Air Fun Facts! Earth is called the Goldilock planet. Earth wobbles- its tilt goes from 22.1 degrees to 24.5 degrees every 42,000 years. There are an estimated 8.7 million species on the planet. Fun Facts Earth is the only planet with liquid water. It would take 163 years to get here from the sun driving a car. 97% of all water on Earth is in the oceans. More Fun Facts Video Fun video!! 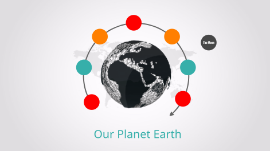 Transcript: Our Planet Earth How big is Earth? 12,756.3 kilometers in diameter (about 7926.3 miles) fits 151 Plutos inside of it. Temperature? averages 61 degrees Fahrenheit coldest temperature: -128.6 degrees F in Vostok Station, Antarctica hottest temperature: 136.4 degrees F in El Azizia, Libya 365.25 days=one revolution 24 hours=one rotation Earth is made mostly out of iron, magma, rock, oxygen, silcon, aluminum, calcium, sodium, potassium, and magnisum Earth has four layers: the inner core, outer core, mantle, and crust Earth's layers Inner Core inner most layer solid iron, may contain sulfur, nickel, and traces of other elements 9,000 to 13,000 degrees Fahrenheit Outer Core liquid layer mostly iron, plus some sulfur and nickel 7,200 to 9,000 degrees Fahrenheit Mantle second outer most layer liquid layer magma or rock that is so under pressure that it flows slowly and is 1,800 miles thick divided into two layers, upper mantle and lower mantle Crust outer most layer made of oxygen, silcon, aluminum, iron, calcium, sodium, potassium, and magnisum. we live on it The Atmospheric Layers 1. Troposphere- surface, we live in it 2. Stratosphere- 12 miles above the surface, has ozone 3. Metosphere- 31 to 53 miles above the surface and thick enough to burn meteors 4. Thermosphere- 53 to 375 miles from Earth, very thin atmosphere, auroras accur here 5. Exosphere- 6,200 miles above Earth, atoms and molecules escape into space, and satilites orbit the Earth here How is Earth Different? has the only atmosphere that is 21% oxygen humans are able to survive on Earth liquid water on surface Fun Facts Earth is very fragile, with plates that create earthquakes Earth has seasons, because it is tilted slightly It is an exact sphere It is the densest planet in our solar system every winter 7 septrillion snow crystals fall each year named the "Goldilocks Planet" because Earth is not too hot, not too cold one theory of how Earth was formed is that about 4.6 bya stray materials formed together by the force of gravity Earth's only moon Temperature ranges from 253 to -243 degrees Fahrenheit 3,745 miles in diameter formed about 4.6 billion years ago 239,000 miles away from Earth takes 27 days for one orbit very weak atmosphere and no liquid water=no life marias, highlands, and craters is some of what the moon is covered with The Moon The Moon https://www.youtube.com/watch?v=gKdxPw9HDUs Video! Any questions? Thanks For Watching! Sources http://nineplanets.org/earth.html http://utahscience.oremjr.alpine.k12.ut.us/sciber00/7th/earth/sciber/erlayers.htm https://solarsystem.nasa.gov/planets/moon/needtoknow www.bbc.co.uk/science/earth/earth_timeline/earth_formed https://www.quora.com/Who-created-earth http://www.bbc.co.uk/schools/gcsebitesize/geography/natural_hazards/tectonic_plates_rev1.shtml http://www.srh.noaa.gov/jetstream/atmos/layers.html http://www.space.com/18175-moon-temperature.html http://nineplanets.org/luna.html http://www.planetsforkids.org/planet-earth.html http://space-facts.com/earth/ http://science.howstuffworks.com/moon1.htm 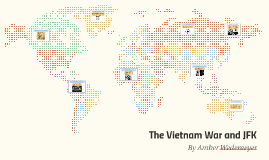 Transcript: What are some ways the US became involved in the war? What was the goal of Kennedy's Vietnam policy? What are some ways that Robert McNamara were involved with JFK? Viet Cong and the National Liberation Front President Johnson escalating the war JFK increased the number of US military advisors to Vietnam Military aid by itself could not ensure success Background of the War By Amber Wedemeyer McNamara was one of JFK's closest advisors on Vietnam Helped shape policies that drew the US deeper into war Cut costs while modernizing armed forces International conference in 1954 to arrange peace settlement (Geneva Accords) SEATO US Involvement Communist Advances The Vietnam War and JFK Interactive Check Vietnam's history of nationalism Vietnam spent a lot of time resiting China France established itself as a new colonial power in Vietnam in 1800's US provided economic aid to the French effort in Vietnam US began to support anti-Communist Vietnam Eisenhower pledged his support to the South Vietnam's Diem Johnson's announcement in 1964: Vietnamese torpedo boats had attacked US destroyers 30 miles north of Vietnam Congress passed the Gulf of Tonkin Resolution Kennedy's Vietnam Policy A Divided Vietnam Expanding Presidential Power McNamara's Role 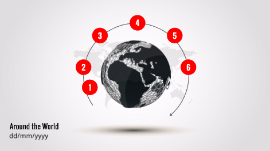 Transcript: dd/mm/yyyy Around the World Introduction 1 The mars rover exsplores mars so they can show what mars looks like. 2 Sun The sun #1 #2 Important Detail #2 #3 Last but Not Least #3 Suitable for Many Presentation Topics 3 Customize 4 The World is Watching Where are You? 5 6 Question time