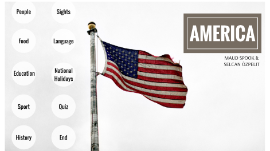 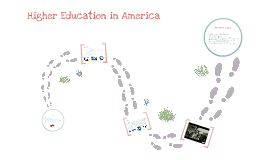 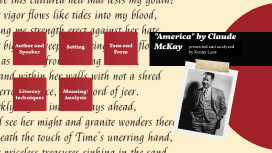 Transcript: "America" by Claude McKay presented and analyzed by Kenny Lane Festus Claudius McKay was born and raised in Sunny Ville, Clarendon Parish, Jamaica, the youngest of eleven children. He worked as a wheel-wright and cabinet maker, then briefly as a police constable, before writing and publishing two books of poetry in Jamaican dialect. Author and Speaker Claude McKay The Move to America In 1912, McKay emigrated to the United States, where he attended Booker T. Washington's Tuskegee Institute in Alabama and studied agricultural science at Kansas State College before moving to New York City. Writing in America McKay was one of the oldest Harlem Renaissance writers and the first to publish, publishing the poetry collection Harlem Shadows in 1922. His other works include the novels Home to Harlem and Banana Bottom. He also wrote an autobiography titled: A long Way from Home Setting Following this line of reasoning, Claude might have written this poem in Alabama or New York City Setting Either way, Claude uses this poem to express his thoughts on America Since the poem is more of a description of America the location is not stated. However, if we put Claude as the speaker, then the poem could have been written when he emigrated to the U.S. Tone and Form Tone The tone changes throughout the poem. At the beginning it starts with a bitter tone, almost sad describing the savage nature of America. As the poem continues it shifts to a hopeful tone, mixed with love and pride for America. Tone Form - The poem is written in the form of a Sonnet - 14 lines - ABABABABABABCC rhyme scheme - The poem is split into three quatrains and a final rhyming couplet. (as required by Sonnet form) - 8th line has a Volta, slightly varying the poem's form Form Oxymoron: "cultured hell" Literary techniques Literary Techniques Personification: Referring to America as "she" and "her" throughout the poem. Giving America actions such as feeding bread or having vigor Metaphor: "sinks into my throat her tiger's tooth" "Yet as a rebel fronts a king in state" Alliteration: "...throat her tiger's tooth" Meaning/Analysis Meaning Claude McKay seems to be making a statement about America in his poem. As the author, and most likely also the speaker, he highlights both the good and the bad of America. My Analysis In my opinion, McKay does an excellent job of painting a picture of life in America. Every negative comment is also balanced with an attitude of positivity and hope. McKay almost seems to love America, even though he has been through difficult times since his emigration. 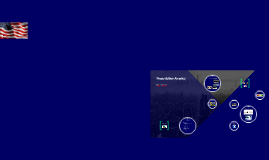