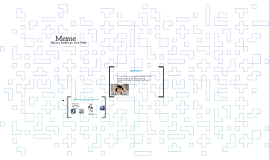 Transcript: Meme What are some types of memes A meme is an idea, or behavior that spreads from one person to another within a culture. It can be transmitted through writing, speech, rituals and the internet. Meta meme Viral meme Internet meme Remix meme It tells a story an idea Ex. Santa clause and coa cola bottle It resembles the culture Ex. arabic gangnam style It is used in business marketing Ex. the business cat with a tie Definition Abdulla Abdulaziz, 201417896 Why is it important 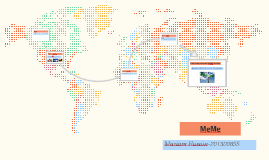 Transcript: How Powerful can our MeMes Become? Mashup: Combine two memes together. Remix: Add some changes on the meme It is anything familiar to whole the world. MeMe Turning memes in to money. Types of MeMes Mariam Husain-201300855 Example of MeMes MeMe It could affects the country's outcome. UAE memes: Burga, Burg Al Arab, Emirates palace and others. Marketing MeMe 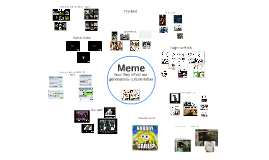 Transcript: The End face palm what they think i do, what i really do grumpy cat 241543903 nobody cares indestructible Nokia 3310 jack never let go how they affect our generations culture today Harlem shake dude you were so drunk last night Meme rage comics 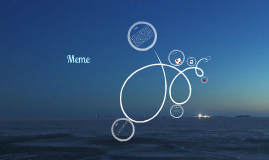 Transcript: Sometimes ‘jump’ from one medium or genre to another Some even jump into different dimensions! Memes are born, grow/spread and sometimes die. Sometimes they “go viral”. It can be transmitted from one mind to another through writing, speech, gestures, rituals or the Internet. Is an idea, behavior or style that spreads from person to person within a culture. Sheikh Khalifa meme British scientist Richard Dawkins coined the word meme in his 1976. He wanted a word like ‘gene’ that conveyed the way in which ideas and behavior spread within society.Since then, the word has been picked up to describe a piece of information spread by e-mail or via blogs and social networking sites. A meme can be almost anything—a joke, a video clip, a cartoon, a news story—and can also evolve as it spreads, with users editing the content or adding comments. Meme Example of meme Of course, a meme for the next generation, the President of the UAE. Example of meme The late Sheikh Zayed (may he rest in peace), is a meme of central importance to the UAE. This image is so commonly seen in the UAE that students may not have considered the cultural information this image carries. meme Tom and Jerry is a series of theatrical animated cartoon films created by William Hanna and Joseph Barbera for Metro-Goldwyn-Mayer, centering on a never-ending rivalry between a cat (Tom) and a mouse (Jerry) whose chases and battles often involved comic violence. Sheikh Zayed Memes can : 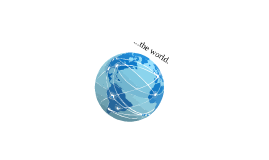 Transcript: Ideas that unite... The internet has allowed meme's to spread globally at an incredible rate. to the next Gene found this on Reddit... LMAO Imitating the word: ideas. love your last post! reminded me of this^ 1976 Because of their ability to generate a massive audience at nearly no cost, meme's have tremendous potential for advertising and marketing. The term meme was originally coined by biologist Richard Dawkins. A cultural unit that is passed from one person to another by non-genetic means. Memes are often modified and collectively built upon. ...the world. Bouncing between websites, memes are not constrained to particular audiences. Memes can be ideas, images or videos. –noun Meme fromone -Princeton University A meme originates when someone creates something interesting or memorable. But at their core, memes are ideas that large groups of people can relate to. Meme's account for the non biological aspect of evolution: Memes spread organicially Meme mīmeîsthai: To imitate or copy. exponentially. But Dawkins never predicted the internet... ah hahahaha Origin: 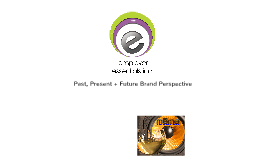 Transcript: Develop visuals that represent our client positively Develop a character that represents how we want people to view HR & Payroll Humanize the character and make it more palatable for consumers Develop a warm lead-in to initiate conversation with potential clients Develop a presence by changing industry vernacular A brand with legs allows for robust collateral in the future and an array of marketing opportunities co-marketing Don't scare people! www.employeressentials.com Past, Present + Future Brand Perspective Past Perspective Just what does Harris represent? Past Perspective We're not innovative... Combined Experience strategy + idea development We’re not a premier agency. We don’t consider ourselves to be first in position, rank, or importance, and we’re not spending anyone’s money trying to achieve such status. We are grounded. We are centered with an unpretentious approach. We are realistic and balanced with strong principals and a keen understanding that there are many ways to have an impact. We're not innovative... live activations We are grounded. digital + social media Studies show that there is a direct link to the five senses and how they effect human memory and emotion, and can greatly enhance one’s engagement with a brand (offline and online). Indulging the five senses also increases the likelihood of advocacy and stronger business results. In the world of business, connecting at an emotional level is key to brand loyalty, and catering to the five senses is often the missing ingredient to capturing hearts. 32 Years of Marketing, Sales, and Success The #1 goal… Brand Standards Indulge the senses. How We Do It Website Online + Offline creative services branding Experience Gained We're not a premier agency... cultural intelligence Harris was born! Business Cards Expertise to Share We are meme. HARRIS was born... We are disruptive. We’re not innovative. We’re not trying to do the same thing better nor are we trying to trump the thinking of our peers and teachers in the marketing industry. We are disruptive. We aim to interrupt our notions of how marketing should be done and investigate ways of how marketing could be done to achieve new…and possibly!...better results. We're not results-oriented... We are effective. We’re not results-oriented and feel the phrase is pointless. Every business partner you engage should be looking for results. The question we ask is, are the results effective in accomplishing our objectives? And so, we aim to be effective. We are looking to make a real and positive impact on every project we touch. In fact, if we feel we cannot be effective with the results we seek, we will decline an assignment. Harris is the HR and Payroll monkey on the backs of today's small business owners