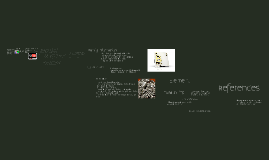 Transcript: You May Find This In Toxis Like Maybe Foe Example Rat Posioning, and Insecticides. DeFine Isotopes : are different types of atoms (nuclides) of the same chemical element, each having a different number of neutrons Anion are negative ions Mordern Periodic Table Element Electonegativity is a chemical property that describes the ability of an atom or, more rarely, a functional group to attract electrons or electron density towards itself. Thallium (Ti) Cation Metallic atoms hold some of their electrons relatively loosely, and as a result, they tend to lose electrons and form. A low-abundance element in both the solar system and the Earth's crust, boron is concentrated on Earth by the water-solubility of its more common naturally-occurring compounds, the borate minerals. It is Not Use in Anything Industry. DeAunte Long 2nd Hour Boron Group Boron (B) The Difference Bewtween Group & Period ? A group is also called a family, and runs in columns. All the elements in a group share the same characteristics. For example, Group 18: The Noble Gases, do not react with any other elements. Elements in a period however, do not share the same characteristics. Periods run in rows. There are 7 periods and 18 groups The Elements Are semi-metal Boron (B) and metals Aluminum (Al), Gallium (Ga), Indium (In), and Thallium (Tl). Thallium Atomic Number is 81 and the Mass Number is 204.383. It Is Also Metal. Atomic Radius is a measure of the size of its atoms, usually the mean or typical distance from the nucleus to the boundary of the surrounding cloud of electrons Ionization energy is is the minimal energy required to remove (to infinity) an electron from the atom or molecule isolated in free space and in its ground electronic state All My Information amd Sites I went to Was Wikipedia, and Also Google Picture. And Chemical Resoures,com Family Information The History Over The Periodic Table Of Elements Started Reflects Over A century Of Growth in the Understanding Of Chemical properties and culminates with the publication of the first actual periodic table by Dmitri Mendeleev in 1869. History Boron Family (13) - do not occur elementally in nature - are scarce in nature (except aluminum, which is the most abundant metallic element) - have three valence electrons - are metallic (except boron, which is a solid metalloid) - are soft and have low melting points (except boron, which is hard and has a high melting point) - are chemically reactive at moderate temperatures (except boron) The Periodic Table Is Arranged By Atomic Numbers. They Are Positioned into vertical columns (Groups) and horizontal rows (Periods) to display these commonalities. Atomic Number Tells Me How Many Protons Are in A Atom. Mass Number Tells Me how many protons and neutrons in its atoms. References Boron Group 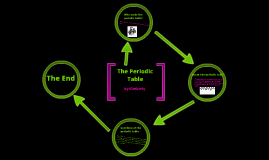 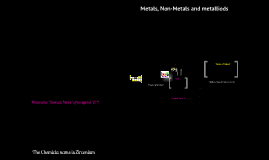 Transcript: Metals, Non-Metals and metalliods Metals Where is the "metals" location on the periodic table? Metals are located on the left side and the middle of the periodic table. Metalliods What is a Metalliod? A Metalliod is a mixture of an metal and a non-metal. Non-metals How many elements are non-metals? There are 16 elements that are non-metals. What is the "symbol" of Arsenic? The symbol of Arsenic is "As" What is the "Chemical Name" of the symbol "Zr"? The Chemicla name is Zirconium Zi 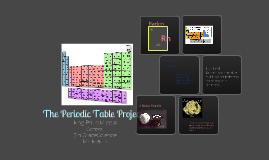 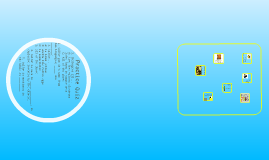 Transcript: Uses Sulfur Chalcogen elements in test tubes. Bleaching Practice Quiz 1. Chalcogens all... A: Have five valence electrons B:Are found in copper ores C: All of the above Compounds containing chalcogens are called chalcogenides Chalcogen family on the periodic table Discovery of sulfur Properties Of Sulfur sulfer's chemical square It is not known who discovered sulfur, but it was mentioned in the tale of Sodom and Gomorrah. Lemon yellow Smells like rotten eggs 5. Sulfur is mentioned in the bible as _________. Chalcogens Nonmetalic Most Interesting Aspects Reed James Per 5 11/2/11 Chalcogen Family Charateristics One of the most interesting of aspectsis that in the bible, hell is described as brimstone and fire. Also an interesting fact is that sulfur is essential to life, while sulpheric acid is very dangerous. Sulfur is also used in tear gas, and is what makes your eyes water when you chop onions. Black gunpowder Sulfur has been known since ancient times. It is mentioned in the bible as brimstone. Sulphuric acid Sulfur in the bible All chalcogens are found in copper ores 4. Sulfur is used in _____ _________, an explosive invented by the chinese. The word sulfur also comes from the latin root sulphur Pure Sulfur Tear gas All chalcogens have six valence electrons Sulfer got its name from the sanskrit word sulvere,meaning sulfur. 3. Sulfur... A: is lemon yellow B: smells like rotten eggs C: is nonmettalic D: all of the above Sodom and Gomorrah 2. Sulfur got it's name from two languages; _____ and ________. 1 gas, 2 semimetals, and 1 metal 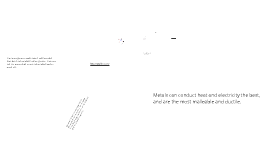 Transcript: Compounds, Ionic and Covalent bonds. Compounds are.... a substance formed by the chemical combination of two or more elements examples of compounds are... water- H2O carbon dioxide-CO2 table salt-NaCl Na has 11 protons and 11 electrons. It has to give away one electron to form and octet. It can bond with group 17 or the halogens, because they have 7 valence electrons, and need one more. After they bond, they become NaCl or table salt! This is an Ionic bond because... one or more electrons are transferred from one atom to another A covalent bond is when... electrons are shared between atoms http://ptable.com/ metalloids are in between non-metals and metals. They can conduct heat and electricity better than non-metals but not as well as metals. They are along the stair steps. Metals can conduct heat and electricity the best, and are the most malleable and ductile. The noble gases already have filled the octet. they don't not bond with other groups. They are not malleable, ductile, can not conduct heat or electricity. http://www.nbclearn.com/portal/site/learn/chemistry-now/how-atoms-bond 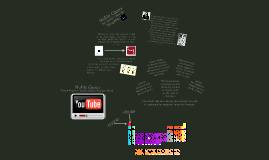 Transcript: By: Hailey Tabor,4th Dmitri Mendeleev created the first Periodic Table according to atomic mass in 1869. Throughout the years, other scientists were able to find or create these missing elements to form the table we know today. Todays Periodic table is ordered by atomic number instead of atomic mass. Henry Moseley was the first to order the elements by atomic number so elements would fit together in groups/families and periods better in 1913. -Elements of the periodic table are arranged in order of increasing atomic number. Starting with Hydrogen(H) with only 1 proton, and ending with Ununquadium(Uuq). with 114 protons. -The atomic number tells you the amount of protons in that specified element. .Atomic Radius- the distance from the atomic nucleus to the outermost stable electron orbital in an atom at equilibrium. .Ionization energy-the amount of energy required to remove an electron from an atom to form a cation. .Cation- any positively charged atom or group of atoms .Electronegativity- containing negative electricity; tending to migrate to the positive pole in electrolysis .Anion- any negatively charged atom or group of atoms -The trends that exist among these proper tiies can be explained by variations in atomic structure Noble Gases GROUP PERIOD -Xenon -Argon -Neon Noble Gases Krypton, -Krypton -An Isotope is one of two or more atoms having the same atomic number but different mass numbers -Radon -Helium 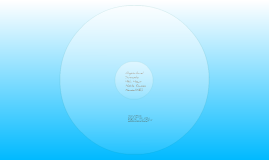