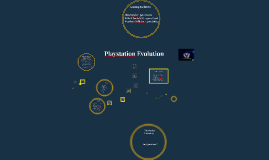 Transcript: Thus game development made a huge leap. With the introduction of full 3d 32bit games. Games such as Diablo which made it into gaming history as one of the best rpg games. Future Technology History of company Evolution of console Future of Sony Playstation 1 Pc gaming A big change came about with the introduction of windows operation system which was created by Bill Gates and was released in 1995. Thus giving it the name windows 95. The major change that it was moving from a 16 bit architecture to 32. The system was run on Windows 2000, this made it easier for Microsoft's software developers, to easily work within the architecture of the console. With console giants Sony leading the industry with the Playstation 2 which was currently on the market at time, having the Xbox running a PC operating system, gave them a competitive edge over Sony Future of Sony Sony was founded May 7th 1946 They were nintendos partner but then went on to be there biggest rival. Sony made there biggest breakthrough in 1994 by releasing Playstation . As the internet was making its way to nearly every home so did online gaming. The internet changed the way the games were played and created new concepts. Despite the drop in price and sales, Xbox was not done yet. The much anticipated online gaming experience, Xbox Live, was released in November 2002, the multiplayer experience allowed users to fight against other players from around the world. This was a new and very large step in the console industry, with over 150,000 subscribers within the first week of its release, it was without a doubt, a success, not to mention the new subscribers in the years to follow. The current generation in gaming consoles, The Xbox One has amazing Graphics and capabilities, it was originally sold to include the Kinect, but can now be purchased without the Kinect for €399 PS3 (2006 - 70 million units sold) CPU - 'Cell' with 6-core equivalent architecture (3.2ghz) GPU - 'Reality Synthesizer' (500mhz) System RAM - 256mb XDR (3.2ghz) Video RAM - 256mb GDDR3 (700mhz) Resolution - 720x480 (SD), 1280x720 (HD), 1920x1080 (Full HD - certain titles only) Media - 25gb BD, 50gb dual-layer BD History of Pc Thank you for your time From the early 2000 games made a huge step upwards, with the introduction of new hardware and software. Games got bigger and much more graphical. Instead of 32 we got 64 architecture. The introduction of direct X 11 made games more real than ever. With the introduction of new game engines such as frostbite 3 (ea) made destruction in games possible. With the release of windows 95 in 1995 and then windows xp in 2001 video game production made a huge leap from the previous 10 years. As the pc was getting more and more powerful with each year so were the games. With the direct X 9 and open GL games were getting more smoother and loosing there "boxiness". Classics such as need for speed underground 1 and 2 came and grand theft auto vice city came out. The fact that pc were getting cheaper with each year more and more developers started appearing on the market thus giving a bigger variety of games to the consumer. A big step for Microsoft, came about in 2010 with the release of the Kinect for Xbox, which allows users to to control their Xbox using Voice and Motion commands. As well as the release of the Kinect, Microsoft also released a slim version of the Xbox 360, with more memory, more USB ports, better specs and lets not forget, the built-in Wi-Fi. It became known as the "Xbox 360 S". Xbox Live Playstation portable Thanks for Listening Sony PS1 (1994 - 102 million units sold) CPU - 32-bit MIPS (33mhz) GPU - 32-bit R800A (33mhz) System RAM - 2mb Video RAM - 1mb Resolution - 640x480 (SD) Media - CD-ROM (Compact Disc, read-only-memory) Kinect & some Liposuction PS2 (2000 - 155 million units sold) CPU - 64-bit 'Emotion Engine' (299mhz) GPU - 'Graphics Synthesizer' (147mhz) System RAM - 32mb Video RAM - 4mb Resolution - 720x480 (SD), 1280x720 (HD - certain games only) Media - 4.7gb DVD, 9gb dual-layer DVD Xbox was finally released in the U.S on November 14, 2001. With over 1 million consoles sold after the first 3 weeks of release, the console was somewhat of a success, with Halo as its flagship game, this was key contributor to the consoles success. However, after being released in Japan in February 2002, and in Europe in March 2002,the console failed to gain popularity, eventually causing Microsoft to cut the price from $299 to $199 in April of the same year. Terminology Sony isn't falling behind its main competitors and also started work on a virtual reality headset "Project Morpheus" It is somewhat similar to oculus rift will be more focused towards the console market. It is currently in testing and should be released to the wider public in the next 2-3 years. Red Ring of Death PSV (2011 - 4 million units sold) CPU - ARM quad-core (1ghz clock, 2ghz max) GPU - Quad-core 5XT (250mhz clock, 500mhz max) System RAM - 512mb Video RAM - 128mb 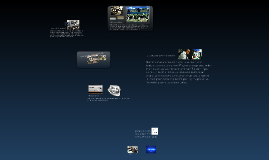 Transcript: 1. Mouse and keyboard support Well, duh. Console kids who have grown up with a controller in hand might argue, but there's still no better way of playing just about any game in any genre – not just shooters – than the combination of keyboard and mouse. It just works, offering orders of magnitude more precision and speed than fiddly analogue sticks. 2. High screen resolutions While Microsoft and Sony scream about 'true HD' in their games – but in many cases don't actually deliver it – the PC has been happily running games at 1080p and above for years. In fact, the near-HD default res of 1,280x1,024 is very 2001; even a medium rig can handle 1,600x1,200 or more these days. 4. No red ring of death Well, you only get this on the Xbox, of course, but the last thing you want your gaming machine to do is to completely konk out everyone knows bros play on the computer via lan party! YOU DON'T GET THIS WITH XBOX! BRO LAN PARTYS. yes that is a mouse you mad? WHY GAMING IS BETTER ON A PC 3. Upgradeable hardware With the aforementioned higher resolutions and textures, chances are a new PC game already looks better than its console counterpart right now. But even if you can't run it with all the visuals tweaked to the max, processor and graphic cards prices drop so quickly that it's hardly bank-breaking to refit your rig in a year or so, for better graphics and more speed. Click anywhere & add an idea 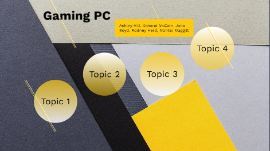 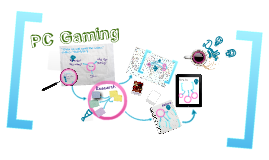 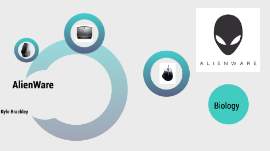 Transcript: AlienWare Kylo Brackley AlienWare PC are around about 1500 pounds and the storage is a Intel Core i7+ 8700 Processor Memory 16 GB RAM / 16 GB Intel Optane Storage: 1 TB HDD Graphics: NVIDIA Ge Force GTX 1070 this good but you can get a higher ram like 32gb ALIENWARE PC Laptop by alien ware laptop 17 inch Laptop 17 inch the 17 inch laptop is got a vr experince on it and it has new contol options and it has color changes and it runs on windows 10 and it i sa Up to 8th Generation Intel Core i9 and its also comes with tobii technology Keyboard and Mouse keyboard and mouse that alienware make are quit pricey averaging around about 120 for both on a other there key fetchers about to mouses is that the mouses has two buttons good for gaming and special features about the keybord is that is had 5 programmable Marco key functions mechanical switch keys and a zone-based RGB backlight with alien fx tenolgy bilogy off alienware https://www.dell.com/en-us/gaming/alienware https://www.dell.com/en-us/gaming/alienware-accessories-and-gear https://www.dell.com/en-us/shop/alienware-pro-gaming-keyboard-aw768/apd/580-agjp/gaming Biology 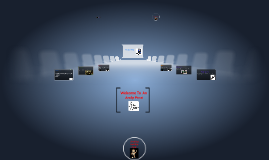 Transcript: You can see more if you have more then 1 monitor even more if you have big T.V While consoles can't get better until the next version PC's always get better Reason 6: Welcome To An Andy Prezi Reason 3: PC Gaming With a gaming computer you can have a gaming mouse and keyboard to suit your game type eg. MMO, RPG, Action PC's have better graphics but that if you have the PC to run them Reason 1: Reason 2: Good Bye And Stay Away You get better Frames Per Seconds FPS No not First Person shooters Frames are how fast the game is going eg. Next Gen Consoles Get 60 FPS A high end gaming PC can get up to 600 FPS Reasons 8: Reason 7: and why it's better then consoles Reason 4: Reason 5: You never really have to get a new PC you can just keep editing After you build a gaming pc you can always upgrade it when new parts come out There is 2 ways to get a gaming PC 1: Build 1 2: Buy 1 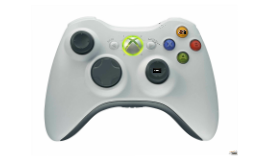 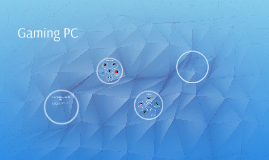 Transcript: Controllers The MSI Z77A-GD65 Gaming Motherboard is a good match with the Graphics Card and Case, the Graphics Card is made by MSI and so is the motherboard, the motherboard fits right in the case, and the Graphics Card connects to the Motherboard The Razer Mamba is a nice mouse which has green LED's, you can make it wired or wireless, this mouse is smooth and accurate when playing games and on the web. MSI GTX 780Ti GAMING Twin Frozr Graphics Card, Graphics cards are now the most important part in gaming because it makes your FPS higher and it gives you more of an advantage over your enemies, Solid State Drive I am building this PC for... a PC gamer, a fast graphics card and 8-16GB of RAM. Graphics Card Keyboard The Crucial M500 960GB SSD comes with alot of memory and the same price as a 300GB SSD from last year, you will be able to keep all of your games stored on this SSD. Extras Mouse Gaming PC This is the Razer Blackwidow Ultimate 2014, it uses mechanical keys which feel nice to the touch, each key is lit seperately and can be turned on and off, there is also a gaming mode, these keyboards are made for gamers by gamers. The Intel Core i5-4670 3.4GHz Socket 1150 Quad Core Processor is good for gaming, it has alot of power but there is no need for an i7 because there is no difference with it for gaming. Main Parts Case The Corsair Vengance RAM is power full with heat sync's which don't let it overheat. Microphone RAM Motherboard This Xbox One controller is good for PC Gaming if you prefer using a controller, this Xbox One controller is comfy to hold and it works on computers Monitor Webcam Processor The Blue Yeti microphone is one of the best in it's price range, it supplys clear audio and is omni and multi directional. This webcame is made by logitech and it is 1080p, it is great for Skype or recording your webcam for other things. This is the Aerocool X-Predator Black Full Tower Gaming Case, it is a good looking Case, it has orange led's and will look nice when the lights are off. The BenQ Rl2455H is a top of the range monitor used by professional gamers in the MLG, the low response time offers fast reaction so you will be ahead of the game.