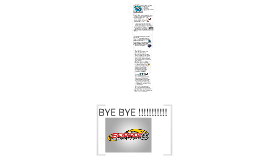 Transcript: for metal beyblades they were to claw145,135,100,gravity ball145,tornado125 came when they decided to make wd(wide defense) and more this is represented by more beyblades vixis with a track 23mm high ms(metal sharp)es(eternal sharp)bs(ball sharp) no energy ring and BASIC tracks and tips Tomy they were made of plastic and about 50% larger than beyblades today heveier then any other or flame size and shape like hades kerbexs insted of 14.5 mm high. and more beyblade parts these include these take up tip and track and change and feature all switch 145 and many more with a metal wheel 25 grams these beyblades were fine until the metal fusion BEYBLADES beyblades with parts of incredible by aujusting these parts this is labaled Tarkera Tomy made a tv become even COOLER!!!!!!!!!!! the tracks were the tips were f (flat)s(sharp)b(bulb)and d(defense) new tips such as ........ hf/s(hole flat/sharp)sd(semi defense) came from japan and are still enjoyed a turn new energy rings such as zrafa,laserta, here and now (B:D) AND MANY MORE!!!!!!!!!!!!!! metal fury show based on these beyblades 50 mm wide or twisted tempo BYE BYE !!!!!!!!!!! and lanched three seasons. in the anime new beyblades from horuses,persues, and many,many more new metal wheels such as gravity,twisted these beyblades are called pre-HWS included plus the new maxim seris which has the seris which is in japan as a mode change tips during battle (F:D) (F:S) manualy before beyblades are spining hades, and more metal fusion beyblades had energy rings had rf(rubber flat)hf(hole flat)fs(flat sharp) they also new tracks such as... there are also 4d preformanse tips but there was a lot more to come the first beyblades origanited in japan by Tarkera HISTORY all over the world are shown METAL MASTERS battle (D:D) (X:D) they can also freespin the tip that i cannot tell you all of them with a metal wheel and track both has two or more parts and you can 145 125 or105 but the main thing is the metal wheel battle tops that change the shape of the metal wheel metal beyblades. the first metal beyblades toyline came out (hybrid wheel system) beyblades has sooooooo many new beyblades 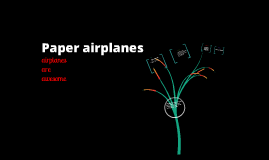 Transcript: If the white paper goes the farthest our hypothesis will be correct. Paper airplanes Hypothesis Experiment Design: The white paper flew straight.The construction paper did a loop in mid air as it flew.The news paper airplane flew straight down Our question is,out of white paper, news paper, and construction paper which will fly the farthest. Conclusion First you fold the piece of paper hamburger style then you fold the ends like a triangle.Next fold the end in then out .finally put two paper clips on the front, then fly it to see how far it goes. airplanes are awesome QL:Data: This concludes the paper air plane project, we hope that this shows our project clearly 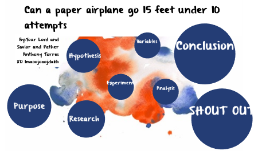 Transcript: By:Your Lord and Savior and Father Anthony Torres XD lmaoojoaojdakh Can a paper airplane go 15 feet under 10 attempts Purpose Purpose I wanna see how far the plane can go past 15 feet. In under 10 attempts Research Research The forces that allow a paper plane to fly are the same ones that apply to real airplanes. A force is something that pushes or pulls on something else. When you throw a paper plane in the air, you are giving the plane a push to move forward. Hypothesis Hypothesis I think that it will be able to go 15 feet in under 10 attempts Experiment Experiment First I will make a paper airplane, then i will throw it, after i will track it each time how far it will go Independent: The Airplane Dependent: How far it will go Control: The wind Variables Variables My research tied in with this project because, it seemed to go the away my research told that it would go very far. My hypothesis was correct and it was able to go 15 feet in under 10 attempts Analysis Analysis In conclusion i was able to make the paper airplane go 15 feet in under 10 attempts Conclusion Conclusion THANKS FOR HELPING ME MAKE THE PAPER AIRPLANE XD THANKSSDJKAJSJH:HH:HAIUHUEULHUIHF:LIUFHEA?:HFEO:HEOO THANKS SAM and KUMI SHOUT OUT 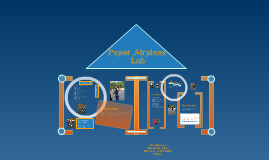 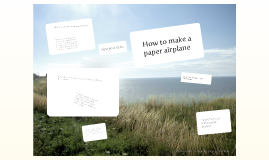 Transcript: 1. First fold the paper in half the long way 3. Starting at the very tip of the point, fold the paper down on each side so the inside edges line up with the center crease. 4. Turn the paper airplane over and fold it in half along the centerline. 5. Fold the first wing with the line of the fold running nearly parallel to the centerline of the plane. Make this fold from 1/2 to 1 inch from the center. Step 6 shows this fold more clearly. 6. Fold the second wing exactly as you did the first. Now your done. 2. On one end of the paper, fold each corner in towards the center to the point where the inside edges are even with the centerline crease. Photo credits: 'horizon' by pierreyves @ flickr How to make a paper airplane Here is how you make a paper airplane. 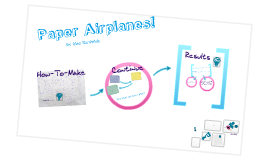 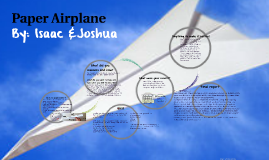 Transcript: Velocity - the time rate of change of position of a body in a specified direction Time - period or interval between two successive events Distance - the extent or ammount of space between two things Speed - rapidity in moving, going, traveling,proceeding, or performing, etc. After folding both planes we marked a specific distance 3m (9ft), and timed how long it took each plane to fly that distance Image by Tom Mooring One thing that we believe would make this experiment better is to create some sort of airplane launched that will launch with the same amount of thrust every launch so that results don't vary because we humans aren't persistent with every repetition (i.e. we may give more/less thrust to the plane one one trial than we would the other but if we had a persistent launcher that wouldn't be a concern.) Thank you!!! What were your results?? Vocabulary words: Aerodynamic lift thrust gravity air drag By: Isaac &Joshua Final report *Note: P2 didn't make it the full 3m; it hit the floor before then, only traveled roughly around 1.5m till crashing* What did we learn? 1.) What would be the speed of a paper airplane that fly's a distance of 21.3 feet in 8.4 seconds *Calculate answer to m/s* 2.)Whats is the force that acts on a paper airplane in order to make it stay afloat and fly faster, and how can this be done? a) Thrust; by folding the wings up. b) Lift; by folding the wings up. c) Drag; by folding the wings down d) Gravity; by folding the wings down. Whats the physics behind it? What did you measure and how? http://allpaperplanes.weebly.com/the-physics.html What did you want to show and how were you able to show this? There are four physics components that act on a paper airplane, these are... Thrust - keeps the plane moving forward Aerodynamic lift - acting on horizontal surface areas that lifts the plane upward Gravity - which counteracts lift and pulls the plane downward Air drag - counteracts thrust and reduces the planes forward speed We wanted to show how differently folded planes have different flight abilities. we showed this through two differently folded planes (using the same material). Plane 1 was folded in a complex manner, plane 2 was folded in a simple manner as everyone may know how to fold a paper airplane. This means that Plane 1 traveled a longer distance faster than Plane 2's time for a shorter distance; Thus, plane one was faster. This also means that plane 1's more complex folds have more flight ability than the simple/quick/easy folds of plane 2. Paper Airplane How long it took to travel 3m We measured the speed of each plane by measuring the time it took to travel a specific distance. 1.8 Quiz 1.9 1.9 1 2 3 Title - Paper airplanes Goal/ Hypothesis - If we make two paper airplanes, one more complex to fold than the other, then the more complex plane will fly better than the simple one because it has a greater center of gravity and is more aerodynamic Background research - 4 physics components of a plane (lift, drag, thrust, gravity) Materials list - two sheets of paper (any), colored pencils, timer, measuring tape. Procedure - take both sheets of paper and design them however you may please (optional); make two planes using both sheets, one easy to fold, the other not so much; take your measuring tape and measure 9 ft; have a timer ready and throw each plane across the specified distance; record your results for each plane (3 trials each) Analysis- we found out that planes with greater center of gravity and larger wingspan will have more capable flying abilities Summary - Our hypothesis turned out to be correct. We would create a launcher to make results precise with each trial. we learned that the hard way is the best way, it was harder to make plane 1 than it was plane 2 and it took more time but it flew way better than plane 2 What does that mean? Anything to make it better? P1 P2 2.1 2.0 2.3 3.) What force acts against thrust? a) Air resistance b) Aerodynamics c) Drag d) Thrust 4.) If you want your paper airplane to fly at a speed of 6m/s^2 over a distance of 17.2 feet, how long would this take? 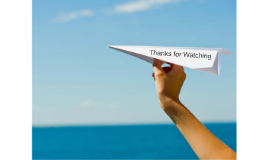 Transcript: Things you'll need: Step 5: Fold the little flap at the middle up. Step 7: Fold your paper in half vertically. And there you have your wonderful paper airplane. Thanks for Watching How to Make a Paper Airplane Step 3: Fold the top corner down. Step 6: Turn the paper around and then fold each side to the middle. Step 1: Fold your paper in half (hotdogs way), than open it back up Step 2: Fold the corners to the middle so it meets the margin. sheet of paper hands ruler 2 minutes concentration Step 4: fold the top corners about 1/3 of the way down .