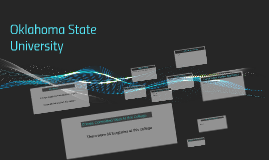 Transcript: $1,030 Males-45% Female-43% Crimes Committed Most At this College $20,027 (out of state) 6 year graduate rate for people pursuing bachelors degree Location of Oklahoma State University Males-57% Females-65% My Major Cost Of Tuition And Fees (latest years) 20 to 1 There were 36 burglaries at this college Oklahoma State University % of males and females enrolled I chose Sports Communication program Student To Faculty Ratio % accepted that apply 75% got accepted that applied 32 people have gotten this degree This school is located in Stillwater,Oklahoma! There are 25,962 students who attend this school! Cost Of Books And Supplies Student Population 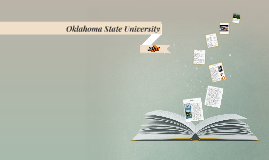 Transcript: Tuition Oklahoma State University On December 25, 1890, the Oklahoma Territorial Legislature finally gained approval for Oklahoma Territorial Agricultural and Mechanical (A&M) College. The first students assembled for class on December 14, 1891.Classes were held for two and one-half years in local churches until the first academic building, later known as Old Central, was dedicated on June 15, 1894, on the southeast corner of campus, which at the time was flat plowed prairie. Admissions Old Central at Oklahoma A&M, 1894 On May 15, 1957, Oklahoma A&M changed its name for the final time to Oklahoma State University to reflect the broadening scope of curriculum offered. In 2005, OSU announced its "Campus Master Plan", a campaign to enhance academic, athletic, and administrative facilities. Over $800 million is ear-marked for campus construction and renovation over twenty years. The Plan calls for an "athletic village" where all of the university's athletic facilities will be located on the main campus. Oklahoma State has hosted a number of high-profile speakers throughout the years, including several sitting presidents. Richard Nixon, George H.W. Bush, and George W. Bush all gave commencement addresses while they were in office. When Oklahoma A&M first started the sports teams had been referred to as the Agriculturists or Aggies, the Farmers, and officially but unpopularly, the Tigers. Around 1923, when Oklahoma A&M College was searching for a new mascot to replace their tiger, a group of students saw Frank Eaton leading Stillwater's Sheep Parade. He was approached to see if he would be interested in being the model for the new mascot, and he agreed. However, it was not until 1958 that "Pistol Pete" was adopted as the school's mascot. Incoming Freshmen Admissions Documents Required: Completed Admission/Scholarship application $40 nonrefundable application fee Official high school transcript reflecting unweighted GPA and class rank (if available) ACT or SAT test score Assured Admission Students qualify for assured admission if they meet ONE of the following criteria: 3.0 GPA or better unweighted cumulative AND top 33.3% rank in high school graduating class, OR 3.0 GPA or better in 15-unit core AND 21 ACT/980 SAT or better, OR 24 ACT/1090 SAT or better I chose this university because of the great atmosphere there is when on campus. It is a beautiful place and it also offers engineering. Pistol Pete Frank Eaton, the inspiration for Pistol Pete History Oklahoma Resident Tuition and Fees $8,440 Room and Board $8,710 Books & Supplies $1,030 Total Direct Expenses $18,180 Out-of-State Tuition and Fees $21,020 Room and Board $8,710 Books & Supplies $1,030 Total Direct Expenses $30,760 Student Union Building at OSU 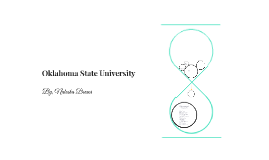 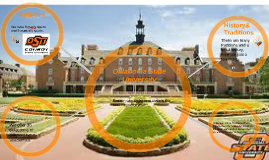 Transcript: There are many farms around stillwater also. Tradition Oklahoma State University Stillwater, OK is Northeast from Oklahoma City. Stillwater is out in the open surrounded by land but we still find a way to have fun. Academic Programs We have 51 National Championships. There is over 300 all americans Oklahoma A&M college was changed to Oklahoma State University later on Academics Softball Basketball Tennis Cross Country Track and Field Soccer Equestrian Golf One tradition here is to lock arms and sway after every touchdown and every home game won. We have 16 majors. 57 study options. 37 student organizations Our campus is surrounded by 5 lakes. Athletics Academic Programs Athletics Agriculture Science is our biggest academic Location The women's athletics are... Osu is located at 202 Whitehurst Way, Stillwater, Ok Reason why Oklahoma State is the best choice for you! History History We have 8 men's sports and 8 women's sports. Location We offer 36 selections of different types of academics. Athletics History& Traditions There are many traditions and a lot of history, here are just a few things Location Location Athletics Baseball Basketball Cross Country Football Golf Tennis Track and field Wrestling Oklahoma A&M college was founded in 1890. Our mens sports are... 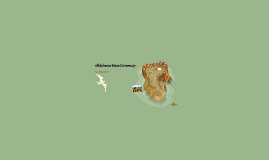 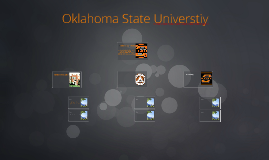 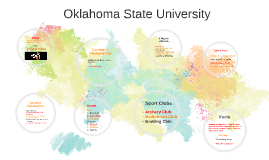 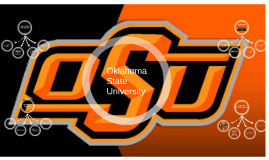 Transcript: OSU offers a sports internship or job Oklahoma State University LOCATION "The Spirit Rider" of OSU was started by a band director and a student named John Beall. This started in 1984, but got the name "Spirit Rider" in 1988. OSU has five popular majors; they are: Business, Marketing, Management, and Related support services. OSU's mascot, Pistol Pete, was modeled after a real person. That person's name was Frank Eaton. ATHLETIC OPPORTUNITIES There is:OSU Stillwater, OSU Tulsa, OSU Oklahoma City, OSU Okmulgee, OSU center for health sciences, OSU college for Veterinary medicine, and Oklahoma Agricultural experiment station. Oklahoma state has many different campuses OSU awards 181 different bachelors degrees ACADEMIC PROGRAMS In football, after every touchdown OSU scores the fans "wave the Wheat" and link arms OSU has 51 team national titles: Wrestling-34, Golf-10, Basketball-2, Baseball-1, and Cross Country-4 OSU has been in 7 different athletic conferences OSU offers a variety of athletics, the popular ones being Baseball, Basketball, and Football Degrees that have to do with people are: Teaching, Aviation, and Health and Leisure. Stillwater is located in North Central Oklahoma OSU offers secondary education programs including: English, Foreign Language, Mathematics, Science, and Social Studies. The name Bedlem came about because of the old-school battles between Oklahoma A&M and Oklahoma Downtown Stillwater is a pleasant place to shop, eat, or just see sights History and Traditions