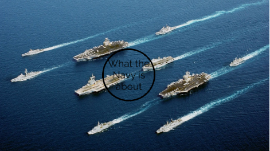 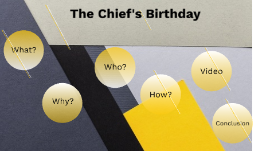 Transcript: The Chief's Birthday What is the Chief's Birthday? What? The Chief's Birthday is one of the longest celebrated and certainly most important ceremonies dedicated to a special group of American sailors every year with the coming of the 126th birthday of the United States Navy Chief. April 1st 2018 rang in a birthday that spans decades of United States Navy traditions, training, and hard work. Such high levels of dedication and sacrifice are not seen by many, thus, making those celebrated stick out as superiors. Bonus Information bonus information The chief petty officer, as recognized today, was officially established on April 1, 1893. Why do we celebrate it? Why? For any organization to continue to improve, innovate and achieve excellence it needs great leadership throughout. A strong leadership is the single most influential variable that affects growth. Sailors trusted with the rank of Chief have shown this leadership, and therefore are celebrated every April 1st. Who is the celebration for? Who? Chief Petty Officers are responsible for three main things: discipline of their Sailors, effective supervision of Sailor’s work, and to act as an advocate for Sailor’s best interest. We celebrate the individuals who have worked to this level because of the amount of discipline and grit they have shown to get to the rank of Chief. The holder of this position is the most senior enlisted member of the U.S. Navy. The rank is appointed by the Chief of Naval Operations (currently, Admiral John M. Richardson). On April 28 1967, Delbert Black was elected the first MCPON. This is the highest rank in the Navy, equivalent to an E-9. Master Chief Petty Officer of the Navy Master Chief Petty Officer of the Navy How did it start? How? To understand the importance of being a Chief in the U.S Navy, it is important to understand how and why the rank was created. It all started with the signing of General Order 409 by President Benjamin Harrison on April 1st, 1893, which made Chief Petty Officer an actual rank, rather than a title assigned by a commanding officer to the most senior First Class Petty Officer in each rate. The order also made the insignia for Chiefs a gold fouled anchor surmounted with a silver U.S.N, with the U standing for unity, the S standing for service, and the N standing for navigation, which are the primary traits for a Chief to have and also the reason that Chiefs are called the " Backbone of the Navy". This, along with the triumphs, responsibilities and experience that is associated with being a Chief in comparison to the rest of the enlisted ranks, are the reasons we celebrate the collective birthday of the rank of Chief. https://ytcropper.com/cropped/Vi5af0e886a8406 Video The role of Chief Petty Officer is a diverse one, being a technical expert and a leader. The position helps future sailors encounter more leadership roles as they progress. It’s very important to mentor the newly commission avengers, I mean officers. Its leadership, as each and every Chief Petty Officer has both a rate and ranking job specialty. For instance, a Chief Petty Officer who has the rate in the Gunner’s Mate would be referred to as Chief Gunner’s Mate. Conclusion Conclusion Unlike a Petty Officer First Class and lower ranks, advancement to Chief Petty Officer not only carries requirements of time in service, superior evaluation scores, and specialty examinations, but also carries an added requirement of peer review. ​​ yup peer review. Hmmm...Nowwe get why some of these guys are stuc​​. It’s because a Chief Petty Officer can only advance after review by a selection board of serving Senior and Master Chief Petty Officers, in effect “choosing their own” and conversely not choosing other. Part 2... Continued With that being said do you know that prior to 1958 the Chief Petty Officer was the highest enlisted rank? But now we have ranks like Senior Chief Petty Officer and Master Chief Petty Officer, because we all love and leadership loves us back. Let’s get to know our chief. What made you decide to join the Navy? Why be a Chief Petty Officer? What were some of the sacrifices you have made to be where you are and who you are today? Where do you see yourself in ten years from now? What is your favorite hobby? Q&A Continued 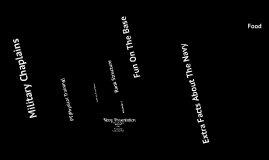 Transcript: Navy Presentation REQUIRMENTS If Two People Were To Enlist At The Same Time The Person They'd Choose First Is The One That Had The Higher GPA In High School. You Need To Be In Shape You Have To Pass A Physical And A Physical Test Which Is Like Running 1.5 Miles, 20 Pushups, 5 Pullups, And 35 Situps As My Estimation. You Can Not Be Overweight. They Are Service Dress Blues, Service Dress Whites, Service Dress Khaki, Full Dress, And Dinner Dress Service Uniforms Are Regular Uniforms Worn On Base Service Khaki Summer White Service Navy Service Uniform Also Have Working Uniforms Like Blue Digital Camo Uniforms & Inspections During A Uniform Inspection You Will Have Your Unifom Inspected By An Officer Or Someone Of High Rank You Will Be Checked On Whatever They Decide To Check On Your Uniform Your Rank, Ribbons, Collar Devices, If You Have Any Stains, They Check Your Belt, Your Gig Line, Your Shoes, Pants, Shirt, And Anything Else Having To Do With Your Uniform PT(Physical Training) PT Stands For Physical Training Rank Structure Military Rank Structure I Will Tell You A Few Of The Military Ranks And Their Pay Grades E-1 Seaman Recruit E-2 Seaman Apprentice E-3 Seaman E-4 Petty Officer 3rd Class(PO3) E-5 Petty Officer 2nd Class(PO2) E-5 Petty Officer 1st Class(PO1) Fun On The Base You Can Have Fun And Leave Off Base To Do What You Got To Do But Make Sure Your Back For Your Duties And Dont Come In Drunk Or Anything Extra Facts About The Navy When In Uniform On Or Off Base In Full Uniform If You Hear The National Anthem Start Playing You Face The American Flag If Not Present You Face The Direction The Music Is Coming From And Preform The Proper Salute When You Retire From The Navy If You Get Any Problems While You Were In There They Will Compensate You For Those (Disabilities You Could Call It) The Scuttlebutt Is Pretty Much Like A Water Fountain Skylarking Used To Be Called Skylacing Was When A Young Navymen Would Go Climb And Slide The Backstays For Fun The Navy's Medal Of Honor Authorized December 21, 1861 It Is The Oldest Continuosly Use Military Award In America Military Chaplains Chaplains Are Pretty Much Preachers, Priest, Minesters. Who Pray For The Whole Unit Or Anybody They Need To Or Want To Food I Almost Forgot The Food On The Ship Or On Base We Have A Mess Hall Which Is Where You Will Eat The U.S. Navy The Bath Room Is Called The Head Because Back In Older Days When There Was No Bathrooms You'd Have To Go To The Head Of The Ship And You Know Let Your Business Go In The Ocean You Also Need A Clean Criminal Record (Exemptions From Some Things Are Possible). You Also Need To Pass A Drug Test They Give So Never Ever Do Drugs If You Plan On Joining The Navy (Waivers Might Be Possible). On Base During Your Free Time You Can Do Many Things They Are... Service Dress, Service Dresses Are For Speacial Ceremonies And Ocassions. They Are... Uniform Inspections You Will Need To Know Your Rank Structure Keelhauling Was A Extreme Brutal Punishment Where The Offender Was Tied To A Rope And Thrown Overboard While The Ship Is Moving If You Did Not Drown To Death While Under The Ship Barncle Usually Ripped You Apart And You Bleed To Death And If You Survived You Apparently Weren't Guilty So Pretty Much They Were Leaving God To Determine You Fate What I Would Do On Base Is Play Some Cards With Other Cadets To Get Into The Navy You Do Need A High School Degree. Navy Seals Navy Mascots Used To Be 2 Cats, 1 Dog, 1 Carrier Pigieon, But It Is Now A Goat And The Macot's Name Is Bill XXVIII(28) During PT You Do Exercises, Jog 9 Miles And Run 3 Probably And Your Commander Or Chief Can Call For PT Anytime They Want You Could Be Sleeping And In The Middle Of The Night You Could Be Woken Up For Some PT Navy Has 12+ Uniforms Navy Colors Are Navy Blue And Gold Morales, Dominick Presented By: USN There Is Also Written Tests You Have To Pass Which Helps Them Decide What Area They Should Employ You In And Finally The Oldest U.S. Military Award So Remeber Always Have Your Uniform In Top Condition