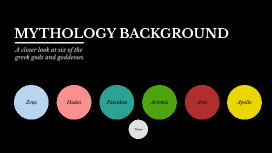 Transcript: MYTHOLOGY BACKGROUND A closer look at six of the greek gods and goddesses. Zeus ("Jupiter") Zeus The God of The Sky How was Zeus created? Birth Zeus, similar to other greek gods and goddesses has an interesting and abstract story of his creation. To stay brief; Zeus, born in 700 B.C. was the youngest of the titans "Cronus" and "Rhea". When Zeus was born, his father, Cronus intended to swallow him just like he did with his siblings. Instead, his mother, Rhea, hid him on a mountain called, "Mount Dicte" in Crete, which avoided him being swallowed along with his predecessors. (paraphrased from Mythweb) How Zeus became the god of the sky. Rise to power Once Zeus grew up hidden from Cronus, he eventually caused the titan(Cronus) to throw up his brothers and sisters, freeing them and allowing them to join him in fighting the Titans for control of the universe. Eventually, Zeus and his siblings vanquished the Titans (including his father) to Tartarus, the underworld. Once they had gained control of the universe, they divided up responsibility/godhood amongst themselves. (paraphrased from Mythweb) Three interesting facts about Zeus Interesting Facts 1. Zeus always kept a golden eagle by his side due to its semblance of strength and justice. 2. Zeus was very harsh in his punishment of mortals and other gods/goddesses. "For example, when Prometheus stole the fire and gave it to humans, Zeus punished him and had a giant eagle eat his liver daily" -Aleksandar Mishkov 3. One legend claims that Zeus was raised by a goat named "Amalthea". Soldiers would dance and shout when the goat was spotted to prevent Cronus from hearing the baby(Zeus) crying. Zeus - Works Cited Works Cited “Mythology: Character List | SparkNotes.” Sparknotes, www.sparknotes.com/lit/mythology/characters. Accessed 20 Jan. 2021. pg. 1-2. Mishkov, Aleksandar. “15 Facts about Zeus from Greek Mythology.” DocumentaryTube, 20 Feb. 2017, www.documentarytube.com/articles/15-facts-about-zeus-from-greek-mythology. pg. 1-1. | (Paraphrased facts) “Zeus.” Mythweb, https://www.mythweb.com/gods/Zeus.html. Accessed 20 Jan. 2021. Pg. 1-1. Wikipedia contributors. “Zeus.” Simple English Wikipedia, the Free Encyclopedia, 18 Jan. 2021, simple.wikipedia.org/wiki/Zeus. Accessed 20 Jan. 2021. Pg. 1-1. *sources aren't specific to pages as all information presented is a collective of these sources* Hades ("Pluto") Hades The God of Death How Hades was created Creation Branching from Zeus's "origin story", Hades was one of the ones vomited up by Cronus, his father and leader of the Titans. Once Hades was saved by Zeus, he joined forces with his siblings to regain control of the universe. How Hades became the god of death. Rise To Power Once Hades and his siblings regained control of the universe, powers and responsibilities were divided up among them. Hades got the underworld, this put him in charge of all death and made him the king of the underworld. Three interesting facts about Hades Interesting Facts 1. Alike Zeus, Hades had a pet. This pet was a dog with three heads named, "Cerberus". Cerberus was, in essence, the watchdog for the underworld. (paraphrased from Wikipedia) 2. Saying Hades' name was frowned upon in the society of that Era in fear of undergoing something tragic and ending up in the underworld. (paraphrased from EveryFactEver.com) 3. Hades is one of the least portrayed greek gods throughout history due to the fear surrounding what he represents. (paraphrased from EveryFactEver.com) Works Cited for Hades Works Cited !! Morris, Beth. “25 Facts About Hades.” Every Fact Ever, 26 Mar. 2020, everyfactever.com/facts-about-hades. Accessed Jan 20. 21. Pg. 1-1. Wikipedia contributors. “Cerberus.” Wikipedia, 7 Jan. 2021, en.wikipedia.org/wiki/Cerberus. Accessed 20. 21. Pg 1-1. Wikipedia contributors. “Hades.” Wikipedia, 12 Jan. 2021, en.wikipedia.org/wiki/Hades. Accessed Jan. 20. 21. *sources aren't specific to pages as all information presented is a collective of these sources* Poseidon ("Neptune") Poseidon The God of The Sea How Poseidon was created Following suite with the previous god's covered, Poseidon was one of Zeus's siblings rescued from Cronus, their father. Cronus swallowed all of his children except Zeus. Eventually, Poseidon was saved by being vomited up by Cronus due to the actions of Zeus. Creation How Poseidon became the god of the sea Rise to Power Once Poseidon broke from the "grasp" of Cronus, him and his siblings fought the Titans for control of the universe. Once this battle was won by Poseidon and his siblings, power was divided up among them. Poseidon received the sea, and with this, the power of earthquakes, storms and horses. Three interesting facts about Poseidon Interesting Facts 1. Poseidon's "pet" was in fact Pegasus, a legendary winged horse. (Paraphrased from EveryFactEver.com) 2. During the "era of greek gods" sailors were so frightened of Poseidon that they would bring horses on board boats with the sole purpose of throwing them overboard in 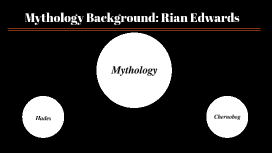 Transcript: Mythology Background: Rian Edwards Mythology Mythology This presentation references Greek mythology and Slavic mythology. Greek mythology is a body of stories concerning the gods, heroes, and rituals of the ancient Greeks. Slavic mythology or Slavic religion describes the religious beliefs, myths and ritual practices of the Slavs before Christianity, which occurred at various stages between the 8th and the 13th century. The story of Hades Hades Hades was a son of the Titans Cronus and Rhea, and the brother of Zeus, Poseidon, Demeter, Hera, and Hestia. He was eaten by his father but was later freed by his brother Zeus. After being freed and defeating the giants and titans he was assigned to be the god of the underworld. In traditional greek mythology Hades was not a cruel ruler and only got angry when someone tried to take people from the underworld or tries to cheat him. Later you see that he kidnaps his wife ,Persephone (because Zeus had promised to give her to him but lied), and tricks her into eating a pomegranate seed so she stays with him forever. Main characters Characters There are three main characters in the story of Hades. Zeus Freed Hades from his fathers stomach Zeus Hades Hades, also called Pluto or Pluton (“the Wealthy One” or “the Giver of Wealth”), in ancient Greek religion, is the god of the underworld. Hades Persephone Hades wife and the god of the seasons Persephone If two disagreeing parties have an issue they can still work it out Theme One example of this is in the story of Persephone where even though the two parties were opposed and Hades wanted to be with Persephone because he loved her and Demeter, Persephone’s mother, did not want to be without her. They came to a compromise where Hades got to be with his wife and Demeter would still make crops for most of the year. Allusion Hades is constantly referred to in the Bible as a dark and menacing creature. It was not a good thing to be referred to as Hades. Allusion Citation Citation Cartwright, Mark. “Hades.” World History Encyclopedia, 27 Sep. 2021, www.worldhistory.org/Hades. MacLeod, Michael. “Hades: God of The Underworld.” Prezi.Com, prezi.com/tbp-ffutmecd/hades-god-of-the-underworld. Accessed 27 Sept. 2021. The story of Chernobog Chernobog The black god Chernobog is the cause of all misfortune and bad things according to the Salvic myth. His only goal is to spread dark and gore everywhere. He is especially feared in the northern part of Russia. The people of the Salvic religion honor Chernobog to insure that are not attacked or hurt by him is to worship him endlessly. Even with this though, his attempts to turn the world to darkness have always been stopped by his opposing twin brother Belobog who is a god who helps people. Main Characters There are two main characters in the story of Chernobog. Characters Chernobog The god of darkness Chernobog Belobog The god of light Belobog Dark and light can not live without one another Theme This is shown because in the story of Chernobog he is always being stopped by his brother who is the personification of happiness and light. Even though Chernobog is shown to be a bad god it is implied that if he were to disappear then the humans would have nothing to fear and begin to challenge the order of the world. Therefore Chernobog and Belobog can not live without one another creating a ying-yang sort of outcome. Allusion Chernabog is a demon featured in the "Night on Bald Mountain/Ave Maria" segment of Disney's 1940 animated feature film, Fantasia. He is based on the God of the Night in Slavic mythology. Allusion Citation Citation Dixon-Kennedy, Mike. Encyclopedia of Russian and Slavic Myth and Legend. Illustrated, ABC-CLIO, 1998. “Disney Lore: Chernabog.” Disney Wiki, disney.fandom.com/wiki/Chernabog. Accessed 28 Sept. 2021. 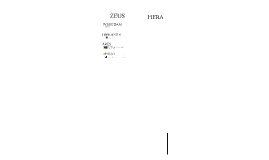