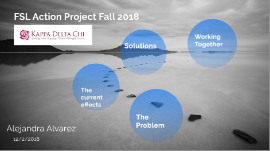 Transcript: 12/2/2018 Alejandra Alvarez FSL Action Project Fall 2018 Nationals gave current members of Kappa Delta Chi starting Fall 2017 one year to raise GPA's from what was a 2.5 to a 2.75 GPA to be meet at the start of the 2018 Fall semester. The Problem The Problem There was no voting or input from ANY of our chapters across the states. Which makes this hard to go against.... Because Nationals makes the rules. Challenge 1 Challenge 1 NO action plan was received from Nationals as to how we were going to get members who were meeting 2.5 and get them to a 2.75 in preparation for the next academic year SO THAT THEY WOULD BE ACTIVE. Challenge 2 Challenge 2 NO Consideration or extension was mentioned if a members has a possible learning disabilities that may hinder the member from meeting the GPA by the new allotted time period.. Challenge 3 Challenge 3 The current effects What problems we have encountered as a chapter since entering the new GPA period... Trend 1 The ratio from Active members to Mandate Inactive members 1:2 This means that there's responsibilities put on active members in picking up more positions to keep chapter running this fall and now possibly spring semester. Trend 1 Trend 2 Stress. On everybody and for everything. Because of this, there's tension between sisters because they may think its something personal and while this is not the case there is also closed lines of communication. Trend 2 Trend 3 By-laws dictate that Mandated Inactive members may NOT attend any open or closed functions. This is effecting one of our first set of values : UNITY Trend 3 Ways We as a SISTERHOOD can come together in this time of difficulty Solutions Solutions Have Academic Chair Meet with every members 3 times during the semester and make an action plan with realistic goals and expectations so that members can go up in GPA. Solution 1 Solution 1 Request the help of Student Disabilities so that our chapter can be educated as a collective on what are the options and ways in case one among us has a learning disability and we can help each other, make it as a team to get our GPA's up. Solution 2 2 Solution Keep the mandated 5 out of the 10 mandated group study hours. -But partner members who are in the same major (if possible) Solution 3 3 Solution While it's unfair that members were only give one year to bring grades up. More than ever should we focus more our attention to our academics. Working together Working Together An emergency meeting should be called if less than 12 members are active. Issues can be then addressed and coming up with various solutions to meet the needs of all individuals is what this chapter needs. The Final Solution If all else fails We must come together and be there to support each other in this time of uncetainty after a change such as this. Final Comment Final Comment Questions? Questions? 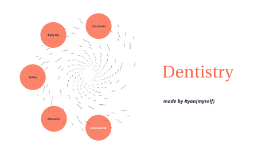 Transcript: Dentistry made by Ryan(myself) Introduction Medical field that focuses on the oral cavity. Also focuses on the muscles in the head and neck. What is dentistry? Education pre-dental/ biology/ chemistry. After university four year dental school. After dental school get certified. Education Salary Varies depending on where you live. Usually ranges from $68,000-$208,000+ Average $153,900. $alary Daily life Diagnose oral diseases Promote overall oral health Create treatment plans. Examine x-rays. Monitor growth and health of teeth and jaws. Daily tasks. Conclusion Dental health is important. Bad oral health is alot more expensive than just going to the dentist in the first place. There will always be room for a dentist. Conclusion Facts Growth in this field is expected to excede 18% by 2024. Only 2% of annual state revenue is spent on dental care. Facts 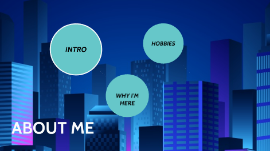 Transcript: ABOUT ME 1. I was born in Beirut in.. I am the only child. 2. I was raised in Oklahoma 3. I learned a lot about the tornadoes 4. I live with my uncle and aunt who have taught me a lot about life and expectations. 5. I have a part time job which helps me with my school expenses. My name is Ali INTRO Why I am here in Albuquerque WHY I AM HERE 1. I came here to finish high school 2. I came here to live with my uncle and aunt 3. I want to finish college here. 4. I want to pursue a career in Albuquerque after graduation. 1. I enjoy collecting coins. 2. I have a few expensive pennies which one day will be worth a lot of money. What are my hobbies HOBBIES 1. Achieving financial stability 2. Pursuing an exciting career 3. Taking care of my grandma 4. Staying healthy 5. Being with good friends and family In 5 years I see myself... WHERE DO I SEE MYSELF IN 5 YEARS

Transcript: Prezi is easy to use! And you zoom to the selected part of your presentation!!! Just tap... SEE!!! EASY!! With the Zebra you can move your text in three different ways!! Presentation for class 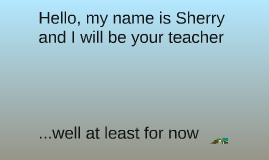 Transcript: Deep Sea Vent Organisms *Flea-sized animals called amphipods *Spaghetti worms that looks like strings *Clams *shrimps *eels *Tube worms(makes food through chemosynthesis) *Pompeii worms that can withstand temperature as high as 80 degrees C *Contains thousands of bat skeletons(some over 1,000 yrs old, also a specie of vampire bat that is now extinct) *Unique organisms not found on land *Ancient artifacts Scientist explores forests at night with a special kind of goggles in order to see. *Nocturnal animals rest during the day but is active at night. Animals that are nocturnal have fewer predators. *Owls and insects have good eyesight and can see well in the dark to hunt and to avoid predators *Snakes have poor eyesight but relies on hearing and feeling vibrations. A snake can also detect slight changes in its surroundings by feeling heat around it. Hydrothermal vents An opening in the sea floor out of which heated mineral-rich water flows * Found 2100 meters bellow sea level on average * Many organisms thrive even in the acidic environment ( Bacteria live in the water around the vents. There bacteria break down chemicals in the hot water. As they do, energy is released. The bacteria then consumes that energy, while other vent creatures eats the bacteria. Chemicals Bacteria Others Let's start our journey and take a peek into the dark. Hue hue hue hue Underground caves Hello, my name is Sherry and I will be your teacher ...well at least for now Night 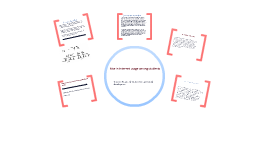 Transcript: Internet Usage and Government sponsored development “The programme closest to our hearts, and the one that we in the government most cherish, is the one known as the Equal Connect Programme. Through this programme, three million Argentine children attend free public schools (set up essentially for lower-income families), and receive laptops for their personal use. The children keep the laptops when they finish their schooling.” The Equal Connect Programme is the one we most wanted to share with you, because it involves not only the allocation of resources for purchasing laptops, but also the associated logistics and distribution, and the generation of special software to support the educational content. Led to the provision of internet connections at all public secondary schools and laptop computers for students throughout the country. The goal is to achieve social integration through the computerization of the public education system while introducing students to new technologies. Developed under the leadership and presidency of Christina Fernandez De Kirchner http://portales.educacion.gov.ar/conectarigualdad/ 15-24 year olds in Argentina are the heaviest Internet users, outpacing every other age group in Latin America as well as the global and regional average for the age group. The government aimed to equip 12 million students and teachers with computers and access to Internet through the world's first official educational portal -- 'educ.ar'. According to a qualitative study undertaken by 11 national universities, the Equal Connect Programme (CIP) helps to narrow differences and increase reintegration of school children. The group has provided 1.8 million netbooks to children across the country. Initiated in April 2010, the program has reached over 4000 establishments, including 3800 secondary schools. Conectar Igualdad http://www.educ.ar/sitios/educar/inicio/index Argentine-Spanish businessman Martin Varsavsky. Back in 2003 Educ.ar World's first official educational portal En sus proprias palabras Rise in Internet usage among students Resultados/Results Internet Usage among students 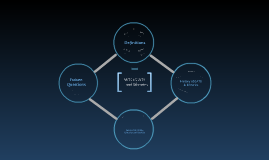 Transcript: True or False: International trade agreements impact information institutions. Definitions WTO Sets rules for trade between nations GATS Covers international trade in services Services Any service in any sector EXCEPT those “supplied in exercise of government authority” Sectors Specific services sorted by genre Service supplied in exercise of government authority An exception in the definition of “service.” States that GATS does not apply to services supplied by the government that have “neither a commercial basis, nor are in competition with one or more service suppliers.” History of GATS & Libraries 1994: WTO adopts GATS with specific rules to be developed then implemented in 2005 2002:ALA requests US trade representative (USTR) to specifically exempt libraries from GATS as a publicly supported, government service 2005: ALA concerned that interests of public libraries are not being considered...Again requests specific exemption 2006: Negotiations around GATS implementation stall 2011: Libraries currently subject to GATS as originally adopted Issues Concerning Libraries and Services Library Services Media: for entertianment and cultural resource Competitors: Netflix, Redbox, Blockbuster, iTunes, Amazon Digital Resources: internet access and databases Competitors: ISPs, cafe's offering internet service, Internet Archive Reasearch assistance: Specialized staff to answer your questions Competitors: Google, Ancestory.com Funding Public Libraries are funded by local tax reveue. One option to end the unfair advantage is to cut funding for information institutions. Another option is to fund all international entities equally. All countries (193) would have to agree to exempt libraries. Other issues: Vague Definitions Frequency of meetings for WTO Turn-around time on WTO actions Future Questions With competition, might public libraries better meet their obligations? Would the loss of autonomous control undermine the purpose and objectives of the library? Would GATS open up the free flow of information and improve living standards, especially in developing countries? Brought to you by: Deanie Adams Ryan Buller Lauren Carroll David Cassens Megan Courtney Tuya Dutton Suzanne Farrand Kalli Mathios And of course... lulzcat WTO/GATS and Libraries 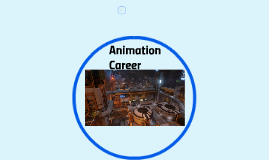