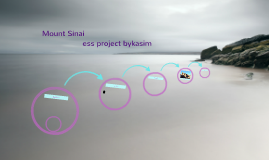 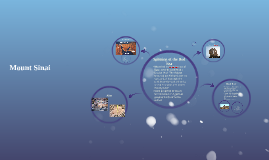 Transcript: Peak of the tallest mountain is covered in black rock Black rock is granite when broken in half Exodus 19:18 “Mount Sinai was covered with smoke, because the Lord descended on it in fire” Ten Commandments Splitting of the Red Sea Moses led the Israelites out of Egypt towards Saudi Arabia Exodus 14:21 “Then Moses stretched out his hand over the seas, and all that night the Lord drove the sea back with a strong east wind and turned it into dry land.” Some people belief Mount Sinai is located in Egypt but geographically cannot be correct Mount Sinai Geological Findings massive rock cut vertically in half sign of water erosion in the middle of the dry desert Exodus 17:6 “Strike the rock, and water will come out for the people to drink” Rock of Horeb Peak Travel Path Found an "L" shaped altar Exodus 20:24 12 pillars Exodus 24:4 "He got up early the next morning and built an altar at the foot of the mountain and set up twelve stone pillars representing the twelve tribes of Israel" Holy Bible (NIV Version) "Mt Sinai." Biblical Archaeological Evidence for Mt. Sinai | Base Institute. Base Institution, 2014. Web. 29 Nov. 2016. "Mt. Sinai Found." Mt. Sinai Found. Revealing God's Treasure, n.d. Web. 29 Nov. 2016. Altar Black Rock Works Cited Rock of Horeb 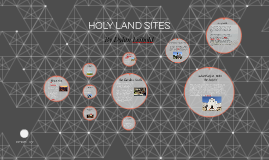 Transcript: Golgotha Hill is a big part of Christian faith cause it is where Jesus died on the cross. Many people would call it "the place of the skull" Luke 23:33 When they came to the place called The Skull, there they crucified Him and the criminals, one on the right and the other on the left. Mount of Olives Sea of Galilee The Church of Nativity Mount Sinai This was a major part of Christian Faith. The Garden Tomb is where Jesus was put after he died on the cross. He came back to life there it was an amazing place. Early on the first day of the week, while it was still dark, Mary Magdalene went to the tomb and saw that the stone had been removed from the entrance. 2 So she came running to Simon Peter and the other disciple, the one Jesus loved, and said, “They have taken the Lord out of the tomb, and we don’t know where they have put him!” At the Basilica of Annunciation the angel Gabriel spoke to the Virgin Mary. This was where Gabriel told Mary she would concieve Jesus. It was a very big place it is meant to be a very magical place. The Church of Nativity was very important for Jesus and Mary. The Church Of Nativity is where Mary gave birth to Jesus. They built over the original spot and put a church. 14 Therefore the Lord himself will give you a sign: The virgin will conceive and give birth to a son, and will call him Immanuel. - Isaiah 7:14 The Basilica of Annunciation Mount of Beatitudes Garden of Gethsemene HOLY LAND SITES The Sea of Galilee was important in the catholic church because Jesus performed a miracle. When Jesus performed one of his miracles. Jesus settled the water and that was seen as impossible at the time. Afterward Jesus appeared again to his disciples, by the Sea of Galilee. It happened this way: Simon Peter, Thomas (also known as Didymus), Nathanael from Cana in Galilee, the sons of Zebedee, and two other disciples were together. “I’m going out to fish,” Simon Peter told them, and they said, “We’ll go with you.” So they went out and got into the boat, but that night they caught nothing. ... The Garden Tomb The Mount of Beatitudes was a very important during Catholic faith. Jesus inspired many people while he was here. More and more people started to believe in the Catholic church. Jesus said at the Mount of Beatitudes: “Blessed are the poor in spirit, for theirs is the kingdom of heaven (Matthew 5:3).” Golgotha Hill Mount Sinani was very important to the Christian faith. It was important because Moses was given the 10 Commandments. The 10 Commandements are a big part of our faith. Then Moses went up to God, and the Lord called to him from the mountain and said, “This is what you are to say to the descendants of Jacob and what you are to tell the people of Israel: 4 ‘You yourselves have seen what I did to Egypt, and how I carried you on eagles’ wings and brought you to myself. 5 Now if you obey me fully and keep my covenant, then out of all nations you will be my treasured possession. Although the whole earth is mine, 6 you[a] will be for me a kingdom of priests and a holy nation.’ These are the words you are to speak to the Israelites.” By Dylan Leibold Garden of Gethsemene was big in the christian faith. The Garden of Gethsemene was where Jesus prayed before the night of his crucifixion. " Then Jesus went with his disciples to a place called Gethsemane, and he said to them, “Sit here while I go over there and pray.” 37 He took Peter and the two sons of Zebedee along with him, and he began to be sorrowful and troubled. 38 Then he said to them, “My soul is overwhelmed with sorrow to the point of death. Stay here and keep watch with me.” Church of St. John The Baptist Mount olives was big for Jesus. The Mount of Olives was where Jesus wept after a prophetic vision of the being destroyed. They weren't happy about that and they ended up arresting Jesus. Jesus went out as usual to the Mount of Olives, and his disciples followed him. 40 On reaching the place, he said to them, “Pray that you will not fall into temptation.” 41 He withdrew about a stone’s throw beyond them, knelt down and prayed, 42 “Father, if you are willing, take this cup from me; yet not my will, but yours be done.” 43 An angel from heaven appeared to him and strengthened him. 44 And being in anguish, he prayed more earnestly, and his sweat was like drops of blood falling to the ground.[a] The Church of St. John The Baptist is an amazing landmark. Even if you aren't catholic it is a cool ancient place. John The Baptist would perform masses in this church. Christians during this time would love to attend his mases. Company Logo 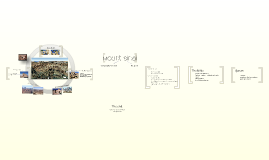 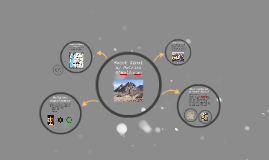 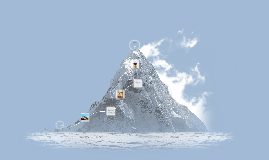 Transcript: GOAL! Thank you! The story is allusion about a person or character who "Climbs a mountain" and comes back down enlightened or with a greater power. What Is It About? In the book Holes, the main character Stanley Yelnats carries his friend Zero up a mountain. After spending days on the mountain, they come back enlightened The Allusion Mount Sinai Holes Moses is called by God to climb Mt. Sinai He meets God at the top God tells Moses to gather the people around the mountain, but they must not climb it After they are gathered, he tells Moses to come back up to the top He gives Moses the 10 Commandments, and Moses descends the mountain with it. Exodus 19: 1-25 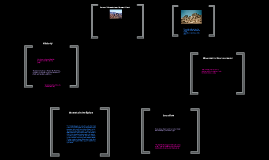 Transcript: Sacred Mountains: Mount Sinai There are religious beliefs about Mount Sinai. People say this is where Moses climbed down the mountatin. So I decided to use a picture that goes with the religion. Mountatin Environment Hotels, restraunts, shops and places of entertainment that accompany tourism would threaten the mountains sanctity. Location Mount Sinai is a high mountain near Saint Catherine in the Sinai region , and located in Egypt. The Sinai Mountain range is one of the worlds oldest massifs. There are 10 million year old black volcanic rock formations. It's mounts are mainly magmatic. Mountain Religion The Israelites left egypt and came to the desert of Sinai. Lord Told moses to go to the people and consecrate them ready for tommorrow, because on that day the lord will come down on Mount Sinai in sight of all the people. The Lord told Moses to tell the people not to approach the mountain or touch the foot of it. He said whoever touches the mountain would be put to death. Mount Sinai was covered with smoke because the lord descended it on fire. The whole mountatin trembled violently. The Lord descended to the top of Mount Sinai. He told Moses to tell the people not to force their way up or he will break out against them. History Moses heard a voice speak from fire that commanded him to lead his people Mount Sinai is also known as Mount Horeb, Mount Musa, Gebel Musa and Jabal Musa which is a popular place of pilgrimage for its religious significance. Mount Sinai is home of the Saint Catherine Monastery 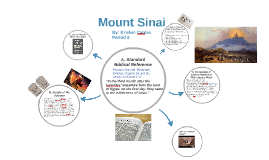 Transcript: D. Knowledge of Biblical Reference With Literary Work Mount Sinai A. Standard Biblical Reference C. Use of Allusion Other Than Bible Cont. Understanding where the Ten Commandments had come from in the Bible, reading George Orwell's Departing from a place called Rephidim, the prophet Moses and a group of Israelites reach their next destination, Sinai. As the rest of the travelers were settling in the wilderness, Moses visits God on Mount Sinai. God tells Moses to tell the Israelites to obey him in that the Israelites, as well as Moses, is in a holy nation. God had also told Moses that the Israelites shall wash their garments in time for the third day, the Lord's arrival onto Mount Sinai. Anyone who touches the mountain will be stoned to death or killed with arrows. Third day came, and smoke covered the mountain with God on the mountain, he called Moses to instruct the Israelites. In the end, the Ten Commandments were created, and all follow God and his rules. Found in the Old Testament, Exodus, chapter 19 and 20, verses 1-15 and 1-17 "THE SEVEN COMMANDMENTS 1. Whatever goes upon two legs is an enemy. 2. Whatever goes upon four legs, or has wings, is a friend. 3. No animal shall wear clothes. 4. No animal shall sleep in a bed. 5. No animal shall drink alcohol. 6. No animal shall kill any other animal. 7. All animals are equal." C. Use of Allusion Other Than Bible Where is Mount Sinai? Animal Farm, I can not only see a political aspect throughout the story with the communistic setting of the animals, but also a religious reference to the "Seven Commandments" being an allusion to the Ten created on Mount Sinai with God. For instance, commandment six is the same as in the Bible, "No animal shall kill any other animal," to "Thou Shault Not Kill." B. Details of the Allusion By: Kristen Canlas Period 8 "In the third month after the Israelites' departure form the land of Egypt, on the first day, they came to the wilderness of Sinai.."