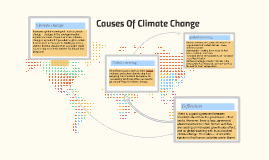 Transcript: Causes Of Climate Change Human activities are causing the release of large amounts of carbon dioxide. These activities include: deforestation - cutting down trees for fuel, farms, buildings and roads increased use of energy (and so an increased use of fossil fuels). As the percentage of carbon dioxide in the atmosphere has increased, so in general has the Earth’s mean temperature. Greenhouse gases such as water vapour, methane and carbon dioxide stop heat escaping from the Earth into space. An increased greenhouse effect can lead to global warming and climate change. Increased global warming will lead to climate change – changes in the average weather experienced over 30 years or more. Climate change may make it impossible to grow certain food crops in some regions. Melting polar ice, and the thermal expansion of sea water, could cause rising sea levels and the flooding of low-lying land. Climate change global warming Difficulties There is a good agreement between scientists about how the greenhouse effect works. However, there is less agreement about the extent to which human activities are causing an increased greenhouse effect, and so global warming with its associated climate change. The balance of scientific opinion is that human activities are to blame. Global warming 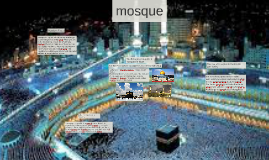 Transcript: mosque is a place where every muslim go to on Fridays to worship allah when you are in the mosque you hear the imam say khutbah the imam talks about how we can be a better muslim by learning the imam in the mosque you can read al quran the mosque is a clam place where you can read without anyone interfacing you The role of mosques in the Muslim community mosque Random Facts a mosque to a muslim is a spashle place where it is peaceful and where you can read al quran a mosque is where you learn islam and to be better muslim you learn how to incress your knowleg you can learn how to read al quran or how to be a sha or just to go to jannah What mosques are to Muslims Kaaba and Al-Masjid al-Haram, Mecca, Saudi Arabia. Worshipers flood the Grand mosque, its roof, and all the areas around it during night prayers. Al-Masjid an-Nabawi in Medina, Saudi Arabia. Al-Aqsa Mosque, Jerusalem The three most important mosques in Islam the three important mosques islam are the following the role of mosques in the muslim community is to pray and worship allah and to gane hassnat to go to jannah the more haaanat you have the more chans you will go to jannah who doen't want to go to jannah yea i thought so 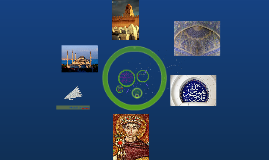 Transcript: MOSQUE By Connor Rules PLACING OF MOSQUES The imam leader of prayers could have a job outside the mosque as a caretaker. An imam quite normally never gets paid for the work he or she does at mosques. An imam is what christians normally call priests but priests do more work Interesting Facts In mosques there are no pictures or statues only colorful patterns and writing from Qur'an. The word mosque comes from the Arabic word masjid. Life for a imam Life for people that go to mosques Mosques have many rules and one of them is that you are not allowed music or singing when you are allowed in churches to sing. Another rule is that it is forbidden to wear shoes on carpeted area at mosques. My last rule is that in mosques the leader of prayers called imam expects before you enter mosques you should be washed. There is a washing fountain out the front of mosques where they expect you to get washed if you are dirty. In other religions men should go to a mosque to worship when women shouldn't but men are expected on Friday. In some hot countries people pray in front of the mosque. All days apart from Friday the mosque is used for daily prayers and teaching children The mosque was first located in Hassan ll in Casablanca Morocca Islam. There are Mosques in every continent except Antartica. Did you know that 8 million visited Makah which has the mosque known as the Great Mosque. In countries what we call churches other countries call them mosques 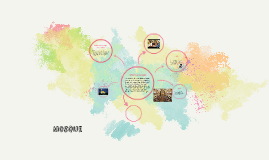 Transcript: Dome Many mosques are decorated with a dome rooftop, particularly in the Middle East. This architectural element holds no spiritual or symbolic significance, and is purely aesthetic. The interior of a dome is usually highly decorated with floral, geometric and other patterns Mosque A mosque is where muslims go 5 time a day to worship to god. A mosque is a dome with towers around it (minarets) these are used to shout and sing. It generally looks beautiful and is just on a road side. when you enter, you must take your shoes of and wash your hands. this is to show respect to god. What is a mosque Inside a mosque people are always aware of what they are doing because they keep to the rules of the mosque and always show their respect to god people who visit mosques show a lot of respect by washing their hands and feet, take their shoes of and prey in the specific rules. they work well together and no one misbehaves in side the mosque. why does a mosque have a dome a basic example. respect glossary inside 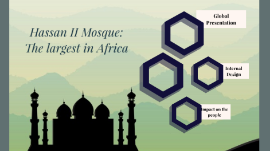 Transcript: Hassan II Mosque: The largest in Africa Global Presentation INTRODUCTION "I wish Casablanca to be endowed with a large, fine building of which it can be proud until the end of time ... I want to build this mosque on the water, because God's throne is on the water. Therefore, the faithful who go there to pray, to praise the creator on firm soil, can contemplate God's sky and ocean." Some general info Located in Casablanca, Morocco Built in 1993 on order of the king Hassan II Can hold up to 105 000 worshippers Other structures Coranic school Hammams Library Design and decoration Internal Design The prayer Hall The prayer Hall 6000 master artisans of Morocco The ceiling The ceiling Retractable ceiling with aluminium tiles The fountains The fountains Floral designs, multicolored ceramic tiles From open criticism to unconvinced approval Impact on the people Criticism Lack of funds => public subscription But eventually the mosque was of good use 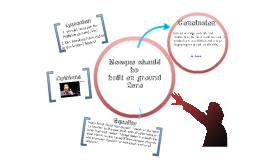 Transcript: 1. should mosque be built on ground zero Question is important is important too Imam Feisal Abdul Rauf quoted: “speaks of the need for Muslims to live peacefully with all other religions.” Jonas Kauffeldt stated: “United States is actually the ideal Islamic society because it encourages diversity and promotes freedom for individuals and for all religions”. Conclusion Opinions is important Mosque should be built on ground Zero Instead of a sign of death and destruction, the area could become a symbol of reconciliation and a new beginning for people of all faiths. Equality is here 2. Do Muslims have rights in the United States? 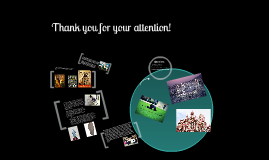 Transcript: - A mosque is the building in where Muslims worship God. The mosque serves as a place where Muslims can come together for salat (prayer) as well as a place for information, schooling and argument settlement. The Imam leads the prayer. Nowadays, particularly in Muslim countries mosques are found on nearly every street corner, making it easier for Muslims to be present at the five daily prayers. There are however, certain features that are common to all mosques. The domes, often placed directly above the main prayer hall, it symbolizes the vaults of heaven and the sky. A minbar is a pulpit in the mosque where the imam (leader of prayer) stands to deliver sermons. The Minab emphasizes contact with the audience. -In the mosque there is a certian manners you must follow. Muslims before prayer are required to cleanse themselves in a purification process known as wudu. However, even to those who enter the prayer hall of a mosque without the meaning of praying, there are still rules that apply. Shoes must not be worn inside the carpeted prayer hall. -Another protocol is concentration. Those in the mosque are required to remain respectful to those in prayer. Loud talking inside the mosque is not allowed in areas where people are praying. Also, it is disrespectful to walk in front of or otherwise disturb Muslims in prayer. - In the mosque it is required to wear clothes that portray modesty. Although many mosques will not enforce the rule, both men and women when attending a mosque must stick to these guidelines. Men are supposed to come to the mosque wearing loose and clean clothes that do not reveal the shape of the body. Equally, it is recommended that women at a mosque wear loose clothing that covers to the wrists and ankles, and cover their heads with a hijab or other covering. Islamic law does not need men and women to be separated in the prayer hall; there is nothing written in the Qur'an about gender separation. But, traditional rules have segregated women and men. By traditional rules, women are most often told to dwell in the rows behind the men. People try to argue that Muhammad (peace be upon him) preferred women to pray at home rather than at a mosque, Muhammad told Muslims not to stop women from entering mosques. They are allowed to go in. Non-Muslims may be allowed into mosques, as long as they do not sleep or eat there. 2. Before a Muslim boy or girl can pray, what porcess do they have to do? 3. How must a women and man dress in a Mosque? 1. What is a Mosque? - Every mosque has a mihrab (A niche in the wall of a mosque) in the wall that show the direction of Mecca; the direction towards which Muslims pray. Most mosques have a pulpit for when a scholar is able to carry out a sermon or speech. There are never any images of life or statues in mosques, in Islam it is prohibited that things like that are kept or displayed. The interior walls of the mosque are decked out with verses from the Quran in Arabic calligraphy, or with complex geometric designs. Questions Thank you for your attention!