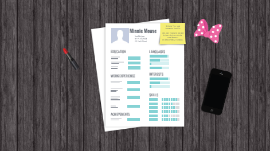 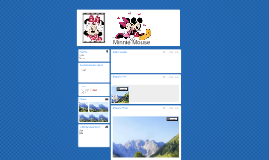 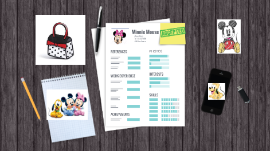 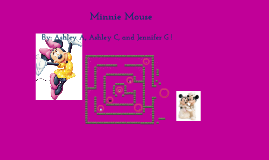 Transcript: Minnie mouse Minnie Mouse in Games Who made Minnie Mouse? Minnie Mouse was made by Walt Disney & Ub lwerks It's said her frist name is "Minerva Mouse." By: Ashley A, Ashley C, and Jennifer G ! The Mickey Mouse Club (1955-1994) Mickey Mouse Works (1999-2000) Disney's House of Mouse (2001-2003) Mickey Mouse Clubhouse (2006-Present) Mothers Name: Matila Mouse Sister Name: Mandia Mouse Age: 83 hi Voices of Minnie Mouse This is Russi Taylor --> Minnie was first voiced by Walt Disney the Voice of Mickey Mouse.( i bet that was weird :P ) She was voiced by 5 people including the person voicing her is Walt Disney (1928) Marjorie Norton Ralston (1929) Marcellite Garner (1930-1938) Thelma Boardman (1941-1942) Ruth Clifford (1944-1952) Russi Taylor (1986-present) Father Name: Marcus Mouse Minnie Mouse Born: June 4,1928 Television appearances Mickey was first appeared in the same cartoon as Minnie The original voice of Mickey was Walt Disney. Mickey is the mascot for Disney, also he is the most recognizable cartoon characters in the world. He is the first cartoon to have a star on the "Walk of Fame". When was her first appearance ( is this really the voice of minnie? Talk about awkward 0_0 ) Minnies favorite color is pink and red In games she is know as a princess, or a queen. In the game Kingdom Hearts she is the queen of the Disney castle. Also, In the game Mickey, Donald, Goofy: The Three Musketeers she plays the role of the princess of France. Who continually daydreams about her true love, Mickey. She started on the cartoon Steamboat Willie in 1928 Info about Mickey Mouse 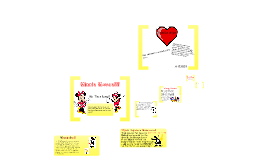 Transcript: They created her because Mickey mouse could not be alone in the Disney shows. After filing in Oswald the lucky rabbit in 1928, they thought a girl mouse would be PERFECT for the shows and comic strips. Oswald the lucky rabbit!! Wardrobe!! In 1928 (when Minnie mouse was first created) she was originally supposed to be wearing a blue and green outfit. And now, look how much it has changed! It went from blue and green to red and white. She has also in between these unique colors went to pink and yellow. Minnie and Micky have been in a relation ship for many years!! They were first brought together as friends, but when the viewers wanted some more romance they were no longer friends they became sole mates!! They have been in a relationship for...... 84 YEARS!!! Minnie Mouse!!! Disney friends!! In spring 1928, Walt Disney asked animator Ub Iwerks to start drawing some new characters. Ub Iwerks drawings were originally of cats and dogs and were rejected by Disney. Ub Iworks saw a picture in 1925 by Hugh Harman of a group of mice with the Disney logo. This inspired him too create Micky and Minnie mouse. Relation ships By Taya!! By Taya Lund! Minnie mouse has lots of Disney friends of hers, a couple of them are Daisy duck, Donald duck, Micky mouse, Goofy and Pluto!! They all are the best of friends and have great adventures !! The creation of Minnie mouse! Thanks for watching ;) The End Why did they create Minnie mouse? Minnie mouse was first created as a Disney character in 1928 and has been a huge sensation for many years! 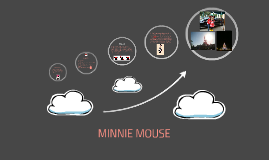 Transcript: Love: Mickey Mouse Pets: Pluto Small enemies: the bad dogs who ruin my petunias. Favorite sport: i love dance. Hobbies: organize parties with my friends Describe myself as: having a good time whenever possible. I would like to be now: making cakes. About me: Minnie Mouse I debuted in Plane Crazy, on May 15, 1928 by the need to seek a partner to Mickey; his real name is Minerva and came to replace Oswald the Lucky Rabbit. Phase 3 MINNIE MOUSE In his first appearance just wore a skirt and petticoats, while in the second short The Gallopin 'Gaucho and wore heels and a hat with a flower. This outfit would use it until Mickey's eyes and she had eyelids, and then Minnie used a loop instead of the hat, a good match for Mickey Mouse. Eternal romantic partner of Mickey Mouse Is a mouse who wears black polka dots skirt, petticoats and heels in most short. He suffered the same transformations as Mickey and some other: step black eyes eyes with eyelids, black and white to color, etc.. 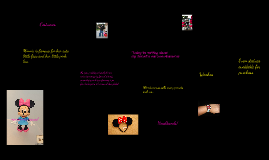 Transcript: Today im writing about my favorite cartoon character ms.minnie mouse! Minnie is famous for her cute little face and her little pink boe. As you probley already know minnie mouse is found almost anywhere,and is a famous icon for little girls all around the globe! Minnie mouse sells many proucts such as... Headbands! Waches Costumes Even statues available for purchess 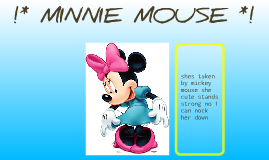 Transcript: !* MINNIE MOUSE *! shes taken by mickey mouse she cute stands strong no 1 can nock her down